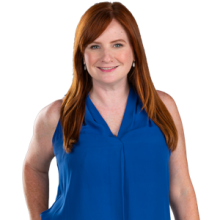 Born and raised in Minnedosa, Manitoba, Lauren is proud to call herself a prairie girl. This Carleton University graduate started as a journalist with Global Winnipeg in 2000. In 2003, she was promoted as Global National’s Manitoba correspondent and later moved to the Toronto bureau in 2005.

It would prove to be a very busy year for Lauren, as she was sent to report on the aftermath of several disasters. She was in New Orleans during Hurricane Katrina, Pakistan after the earthquake and in Sri Lanka following the 2004 Boxing Day tsunami.

In 2008, she and her videographer risked their lives to become the first North American journalists to travel into the restricted Myanmar/Burma region to report first hand on the devastation caused by Cyclone Nargis. Their coverage would later win a RTNDA Charlie Edwards Award-Spot News.

Lauren has reported on-location from several international cities in recent years, including Kandahar, Afghanistan and Haiti. She also served as Global National’s Middle East correspondent for 18 months, based in Jerusalem.

In 2018 Lauren moved over to 680 CJOB to join Greg Mackling and Brett Megarry on the morning show “The Start”.

She is also a proud wife and mom of two boys.