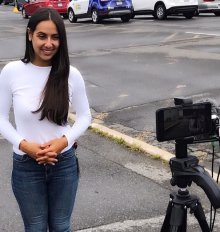 Felicia’s journey towards the world of news started in high school when she decided to take a journalism class as an elective.

That’s when she realized she had a passion for storytelling.

She received a BA specialization in English Literature at Concordia University, and then went on to complete a Graduate Diploma in Journalism.

During her time at Concordia, she wrote for The Concordian.

She then completed internships at CBC Montreal and TSN 690.

Shortly after graduating, Felicia came to Global Montreal as an intern, and has been reporting ever since.

She has recently taken up a new role at Global News: the first-ever iPhone reporter.

On her time off, she enjoys eating good food, spending time with her big Italian family, and talking — of course.