Canadians are divided about whether to let the COVID-19 pandemic disrupt their plans for upcoming holidays and seasonal events, a new poll suggests.

The poll, conducted by Leger and the Association for Canadian Studies, comes as COVID-19 cases are surging and public health authorities are pleading with Canadians in places with rising case counts to avoid contact with anyone outside their immediate families or at least to stick to small social circles.

The results suggest that message is only partially getting through.

The poll found sharp regional variations, however. About two-thirds of respondents in Atlantic Canada, which has been relatively untouched by COVID-19’s resurgence, said they will let their kids go out. In harder-hit Ontario and Quebec, two-thirds said they won’t. 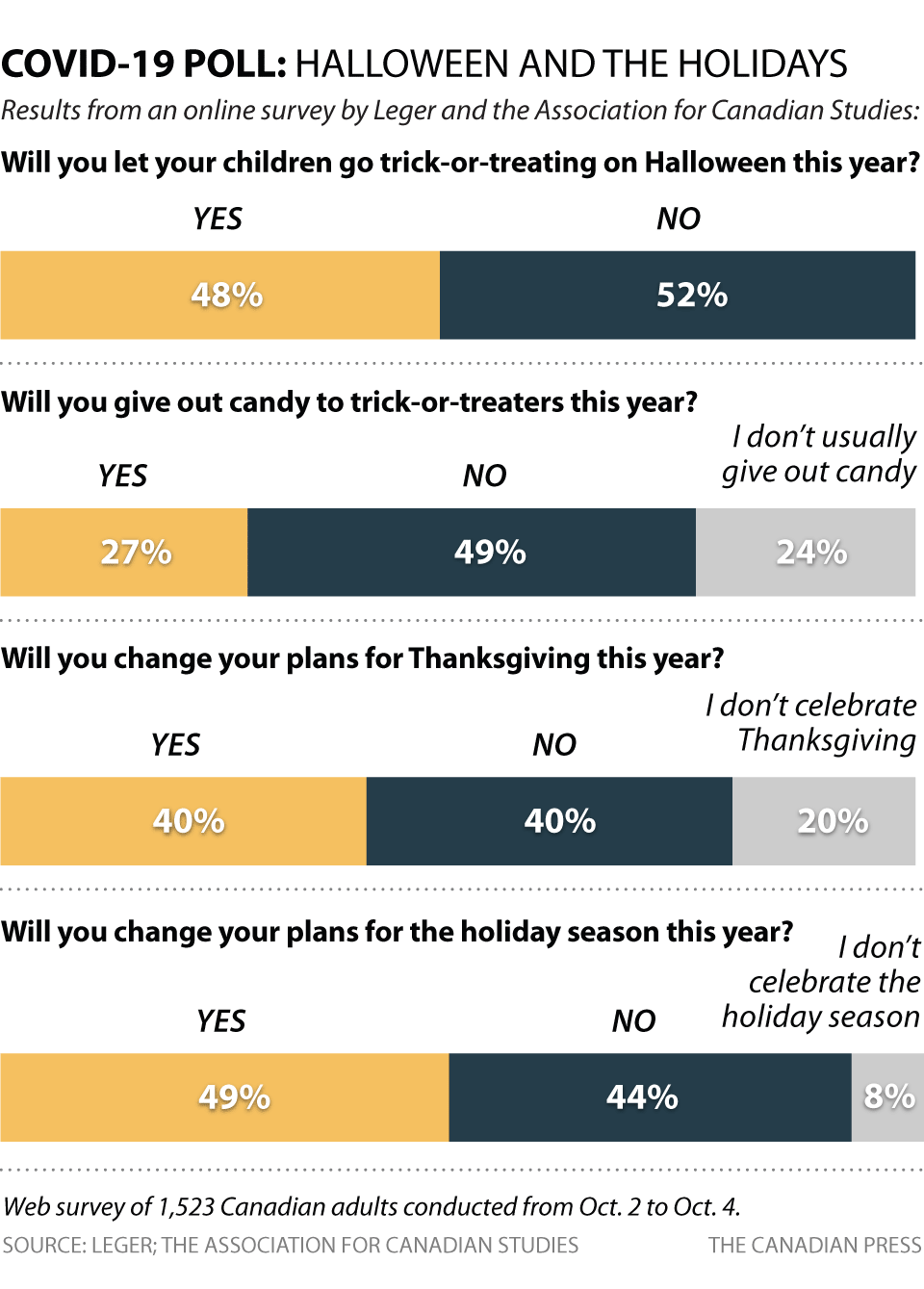 Those kids who do go trick-or-treating will find slimmer pickings, with 49 per cent of respondents nationwide saying they won’t open their doors this year to hand out candy.

Again, Atlantic Canadians were more likely to say they’d give out treats; in Ontario and Quebec, trick-or-treaters seem set for sparse pickings. In Ontario, 24 per cent of respondents said they’ll give out treats. In Quebec, just 13 per cent.

Respondents were also divided about celebrating Thanksgiving this coming weekend, with 40 per cent of respondents saying the pandemic is causing them to change their plans _ and an equal percentage saying it is not. Another 20 per cent said they don’t usually celebrate Thanksgiving in any event.

Those who intend to change their plans were asked to describe how. They were allowed to give multiple answers.

The online poll of 1,523 adult Canadians was conducted Oct. 2 to 4. It cannot be assigned a margin of error because internet-based polls are not considered random samples.

Almost three-quarters of respondents — 72 per cent — said Canada has already entered the second wave of the pandemic, up 10 points since just last week.

There was less division over how governments should respond to the second wave of the deadly coronavirus that causes COVID-19.

Fifty-three per cent said high-risk businesses and activities should be shut down while others should remain open for the time being. Another 28 per cent said as many businesses as possible should be kept open while we see how the second wave progresses, while 14 per cent favoured a near-total lockdown similar to that imposed last spring.

Sixty-seven per cent would back shutting down places of worship, 61 per cent interprovincial travel, 52 per cent schools and universities, 52 per cent visits to long-term or personal care homes, 47 per cent parks and playgrounds, 46 per cent restaurants and offices, 44 per cent shopping malls and 33 per cent retail stores.