A Calgary group that has been busy cleaning up garbage at various local parks and green spaces is appalled at the mess being left behind.

“Three of us, in the space of an hour, came away with four garbage bags full of garbage,” Nathan Schmidt said.

“Just in the Weaselhead [Flats] alone, we’ve had over 10 full bags of garbage on two different trips going down there.”

Schmidt and his group have been going to different areas in and around Calgary picking up trash as part of an effort to raise funds for the Alberta Wilderness Association.

But the most disturbing discovery, he said, has been feces — it’s not known if it’s human.

“In Pearce Estate Park, we found feces fairly close to the river and where people are,” Schmidt said. “I don’t want to speculate too much, but my guess would be it’s a popular place to raft and do those kinds of activities and people needed a bathroom break.

“People were using that as a toilet.”

Schmidt said such behaviour could be curbed if portable potties were put out in the areas and more garbage cans were added.

However, he believes the growing amount of garbage is a symptom of a wider problem that wilderness veterans have been seeing this summer.

“We’re [people] exploring our wild spaces more because of COVID(-19) and we can see from the reports in the backcountry that maybe people just really want to get out and are less experienced about what to do and how to treat our wild spaces,” he said.

“Or perhaps they don’t care and see it as simply their playground and it’s up to somebody else to do the work.” 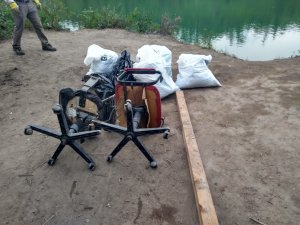 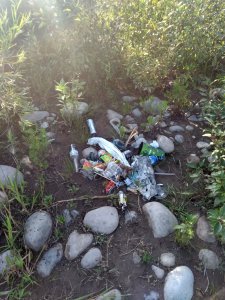 Schmidt said the garbage growth could also be due to cutbacks to city staff, who perhaps aren’t emptying garbage cans as often as they used to.

Global News put that to the city. The Parks Department told us that they always see an increase in the amount of garbage when the weather is warm.

“Staff say they have seen a slight increase in the volume of garbage but it is not that significant compared to other years,” the city said.

Watch: Improper food disposal in Alberta parks a danger to wildlife and humans

The city recommends if people do see litter in parks, they should call 311 so that staff can be sent out to clean it up.

Schmidt’s group has been more than doing its part.

It’s been out seven times since June and is planning four to five additional trips over the rest of the summer.