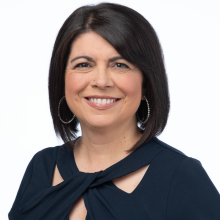 Tomasia was born in Portugal and was raised in Calgary.

She has worked in Alberta, BC and Saskatchewan since graduating from SAIT in the early ‘90s, but is proud to return to the city she loves.

Some of the highlights of her career include a National RTNDA Award for “A Life Worth Living” – the story of a family battling their daughter’s terminal illness.

She was also honoured with Best News Reporting for “Mudslide” – a series of investigative reports about a deadly mudslide in Vancouver.

And Tomasia will never forget covering the devastating Pine Lake Tornado for both Canadian and U.S. networks.

This very busy mom loves spending time with her partner Keith, their daughter Trinity, and their two cats. She is also a very proud member of the Portuguese community in Calgary.

Tomasia also loves shopping, but only if she finds a great deal, because it’s all about saving money!

02:18
Economy
Is Alberta’s plan to remove all COVID-19 restrictions risky for business?

02:46
Canada
COVID-19: New border rules welcomed by some and questioned by others in Calgary

02:31
Canada
Shattered sunroof complaints on the rise in Canada

02:01
Canada
Alberta fitness company that filed for bankruptcy asked to pay up for sessions not received

02:20
Consumer
Getting back in the driver’s seat when it comes to insurance rate hikes

A Calgary father is searching for his young daughter after she was allegedly abducted by her grandparents and taken overseas.

A number of new Calgary businesses opening up post pandemic are being met with many financial hurdles.

An avid Calgary country music fan is demanding a ticket refund after the Big Valley Jamboree cancelled its popular event once again this year due to COVID-19 concerns.

Calgary homeowners warned to be vigilant when hiring siding contractors

Calgary homeowners hit by severe storms are warned to do their homework before hiring any siding company to fix up any damages.

‘It was like a bomb went off’: Shattered sunroof frightens and frustrates Calgary driver

A Calgary driver is demanding answers and compensation after reporting her vehicle’s sunroof shattered while she was driving down a busy highway.

A Calgary woman is demanding Alberta fitness company GYMVMT give her a refund for personal training sessions she was charged for but did not receive during the pandemic.

Alberta recreational home prices rise along with demand amid pandemic

Alberta could capitalize on the growing trend of recreational property sales as demand outpaces supply and prices heat up in other regions.

A program providing rapid COVID-19 testing for Alberta businesses has started off promising with tens of thousands of tests handed out.

Auto and home insurance rates are on the rise in Alberta but there are ways to put the brakes on some of them.

Some Calgary renters are scrambling to find a new place to live after a hot housing resale market puts them out of a home.

The BBB has issued a warning after a recent barrage of lawn care service complaints in Calgary.

Canada has introduced new animal import rules but some question if they go far enough to protect consumers from ending up with a sick pup.

A Calgary couple decides to navigate the city’s red hot housing market on its own with a little help from a local online real estate marketplace.

One expert said food prices as a whole were already expected to increase by three to five per cent this year, while… twitter.com/i/web/status/1…

#BREAKING: The Canadian women’s eight rowing team has picked up a gold medal at the Tokyo Olympics, with New Zealan… twitter.com/i/web/status/1…

Track and field kicks off tonight at the Tokyo Olympics, while more Canadian women are vying for medals in rowing a… twitter.com/i/web/status/1…