Just when the West Coast started to calm back down after a string of earthquakes this week, the biggest one yet rocked southern California Friday night.

But experts say the 7.1-magnitude quake wasn’t related to the three smaller ones that hit B.C.’s central coast that morning — and a bigger one isn’t expected on our side of the border for some time.

“They’re actually two different fault systems that produce different kinds of earthquakes that have different characteristics,” seismologist Mika MacKinnon said Saturday. “They’re also really far away, over 1,500 kilometres apart, and that stress isn’t going to transfer over that far of a distance.”

While the two earthquakes that hit close to Ridgecrest, Calif., on July 4 and July 5 rest on the San Andreas fault, which moves side to side, B.C. rests largely on the Cascadia subduction zone, where one plate is moving below another.

READ MORE: B.C. earthquakes remind residents to look ahead to ‘The Big One’

Friday morning saw three earthquakes in quick succession hit near Bella Bella, B.C., all aftershocks to a 6.3-magnitude quake on Wednesday in the same area. None of the aftershocks measured past 5.6 on the magnitude scale. 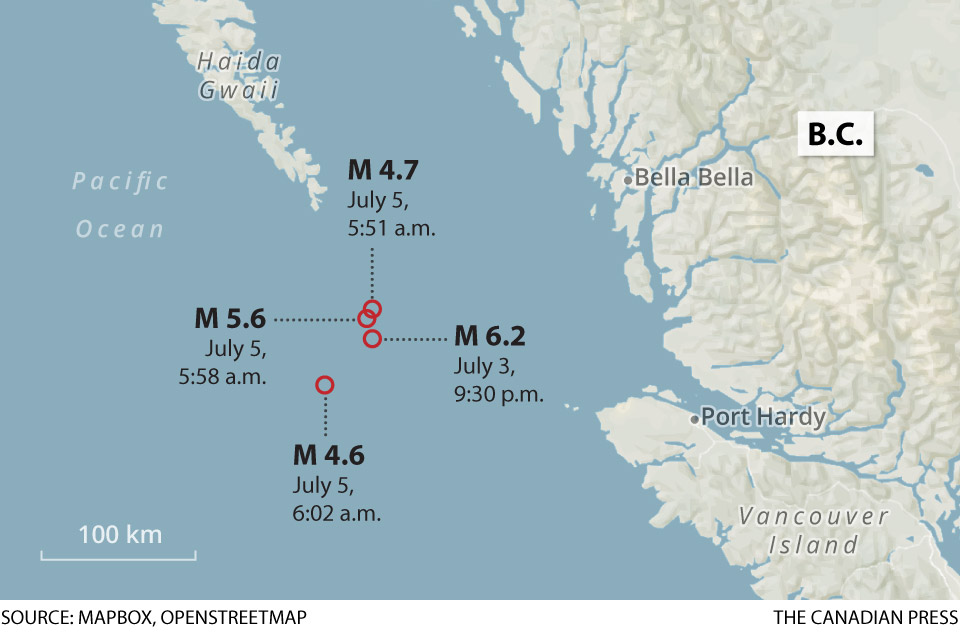 That’s what made the California quake on Friday evening peculiar, as it was stronger than the 6.4-magnitude earthquake on Thursday morning, despite some smaller aftershocks that hit throughout Thursday and Friday.

Seismologists now say that event was a foreshock to the one on Friday, which some experts had predicted.

WATCH: What could the latest California earthquake mean for B.C.?

7:13 What could the latest California earthquake mean for B.C.?

“There is about a one-in-20 chance that there will be a larger earthquake after a specific event,” Ward said.

MacKinnon also said it isn’t uncommon to have earthquakes hit B.C. and California at roughly the same time since the West Coast is such a seismically unstable region.

“There are about 100, 200, maybe even 300 magnitude-6.0 earthquakes every year, which means you’re going to have a couple of them every week and they’re going to be on tectonic boundaries,” she said. “Sooner or later they’re going to happen in B.C. and California at the same time.”

MacKinnon pointed to a similar series of earthquakes that hit both regions in December 2015 within days of each other.

Two days before the start of 2016, a 4.7-magnitude quake struck near Victoria a day after a 4.4-magnitude shaker hit near San Bernardino, Calif. Several aftershocks followed both events, all smaller than the originals.

1:40 Series of earthquakes up and down B.C. west coast raises natural disaster concerns

With all this seismic activity, Ward and MacKinnon both assured a massive earthquake above 9.0, dubbed ‘The Big One,’ isn’t around the corner for B.C. — but that doesn’t mean people still shouldn’t prepare.

Story continues below advertisement
“There will be a bigger earthquake here eventually, but this is not an indicator of that,” MacKinnon said. “The faults this week are just off to the side [from the central fault]. It would take many other movements to open that up.

“But this is a good time to prepare because it will come.”

“This isn’t a foreshadowing, it’s just a really good reminder that we’re in an earthquake zone,” he said.

“There’s lots of online resources on what should be in your earthquake kit. Don’t forget about your pets, don’t forget about medications. Talk to your family members and friends and have a plan on where to meet and how to communicate, because your cellphones aren’t going to work.”

Ward added that earthquake kit — which can include basic supplies like water, flashlights and food in an easy-to-carry bag — can also be useful in any other natural disaster, including a power outage or windstorm.