Bill Cosby victim Andrea Constand, who’s led the charge against the disgraced comedian, submitted a victim-impact statement at Cosby’s sentencing on Monday. It was entered into evidence as part of the hearing, but was made public Tuesday.

Constand was the operations manager for Temple University’s women’s basketball program in the early ’00s, and she said that Cosby invited her to his house under the pretense of advancing her career.

Cosby, 81, was found guilty on each of three counts of aggravated indecent assault of Toronto woman Constand, who is now 45.

Constand’s statement was first posted to Twitter by Laura McCrystal, a reporter for the Philadelphia Inquirer. (It can be read in its entirety, below.) 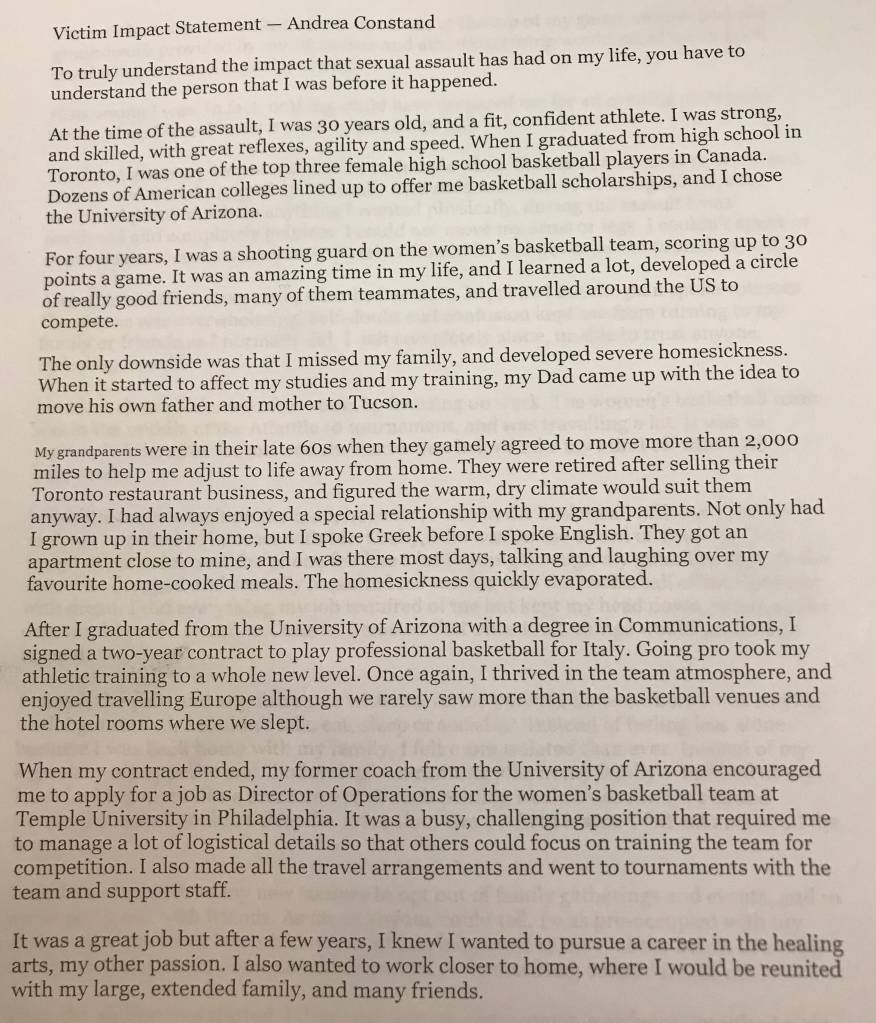 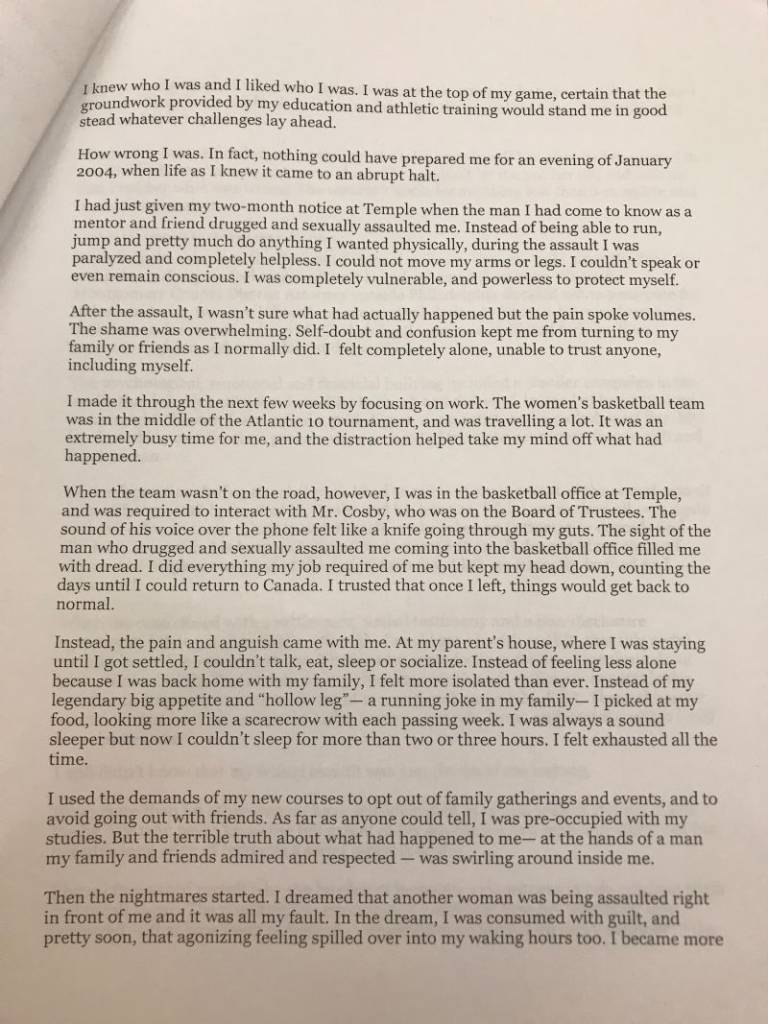 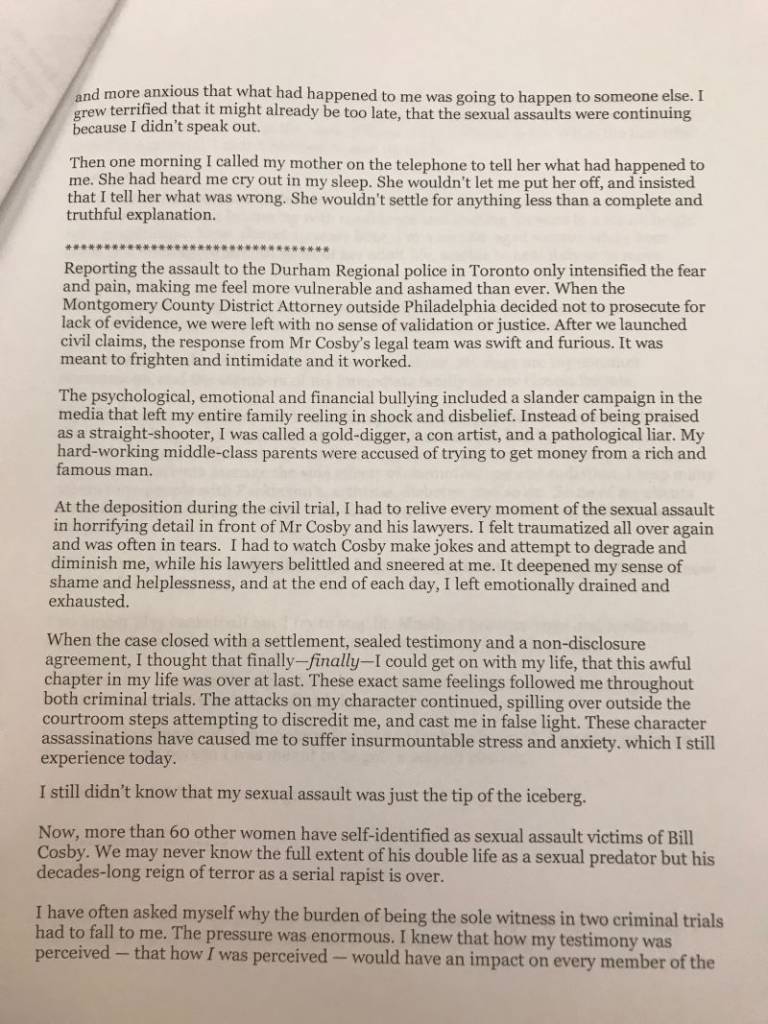 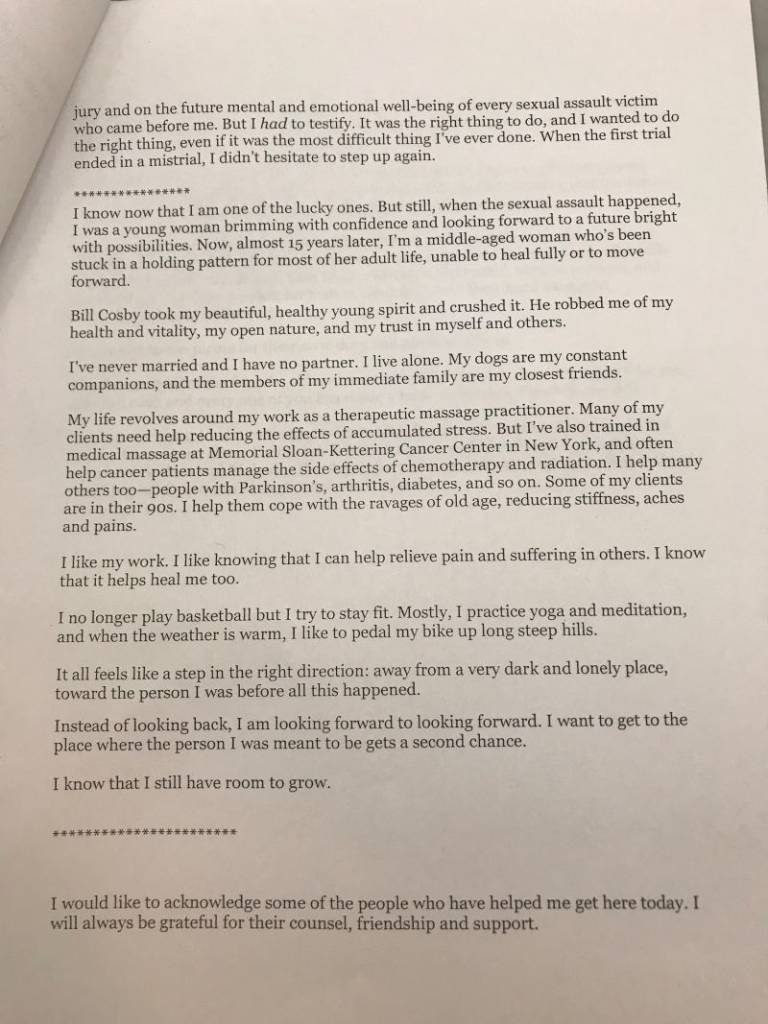 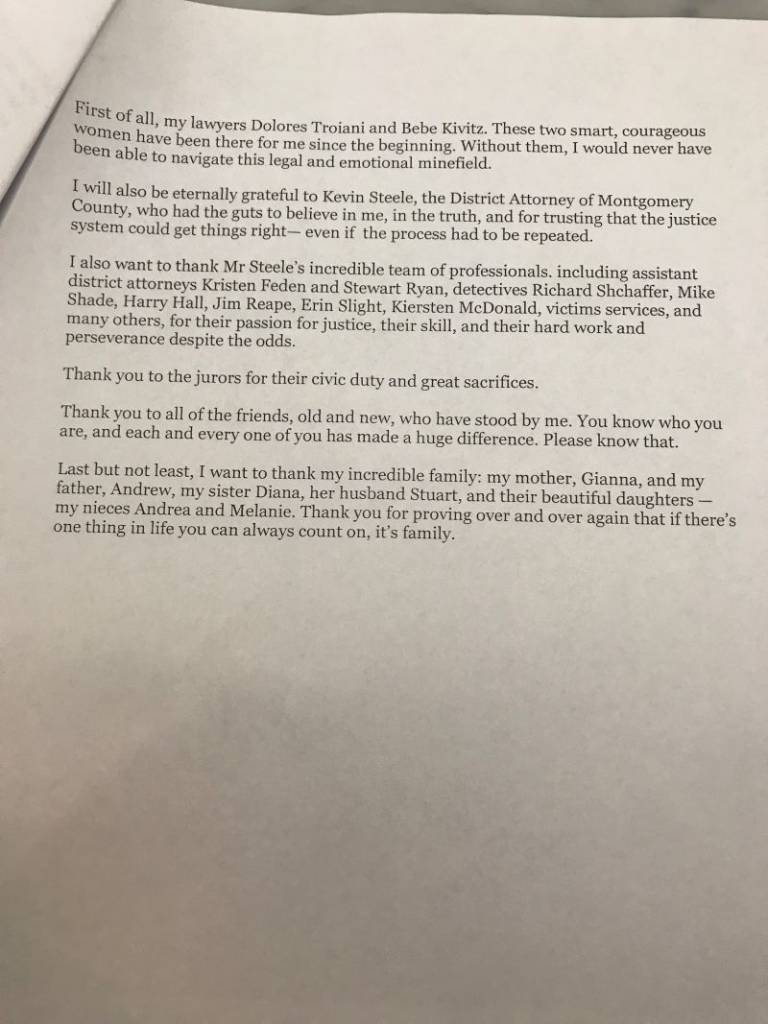 “To truly understand the impact that the sexual assault has had on my life, you have to understand the person that I was before it happened,” it begins.

In the statement, Constand recounts exhaustion, loss of appetite, traumatic nightmares, and an “overwhelming” sense of shame in the weeks following the sexual assault.

“Bill Cosby took my beautiful, healthy young spirit and crushed it,” Constand wrote. “He robbed me of my health and vitality, my open nature, and my trust in myself and others.”

For years, a nondisclosure agreement kept Constand and her family silent; the Cosby criminal trial provided her with an opportunity to finally reveal what took place nearly 15 years ago.

The statement was released as Judge Steven O’Neill weighed Cosby’s punishment and declared him a “sexually violent predator,” a legal scarlet letter that would subject the comedian to monthly counselling for the rest of his life and would require that neighbours, schools and day care centres be notified of his whereabouts.

The comic once known as America’s Dad faced anywhere from probation to 10 years in prison after being convicted in April in the first celebrity trial of the #MeToo era.

Prosecutors asked the judge to give Cosby five to 10 years behind bars, while his lawyers asked for house arrest, saying the former TV star is too old and helpless to do time in prison.

Constand said she now lives alone with her two dogs and has trouble trusting people.

“When the sexual assault happened, I was a young woman brimming with confidence and looking forward to a future bright with possibilities,” she wrote in her five-page statement.

“Now, almost 15 years later, I’m a middle-aged woman who’s been stuck in a holding pattern for most of her adult life, unable to heal fully or to move forward.”

Meanwhile, a defence psychologist testified Tuesday that the chances of the comedian committing another sex offence are “extraordinarily low” because he is old, legally blind and needs help getting around.

Cosby is currently free on US$1-million bail until he’s sentenced, which is expected to happen Tuesday. He is not able to leave the country and is required to wear an electronic monitoring ankle bracelet. He has denied all of the accusations against him, claiming any sex was consensual.