Calgary mayor-elect Naheed Nenshi said he’s never met the Calgary Flames staff member who tweeted a disparaging remark about him after his re-election on Monday night.

Communications and media relations director Sean Kelso suggested that the re-election of Nenshi as Calgary’s mayor is “worse” than Donald Trump being U.S. president. 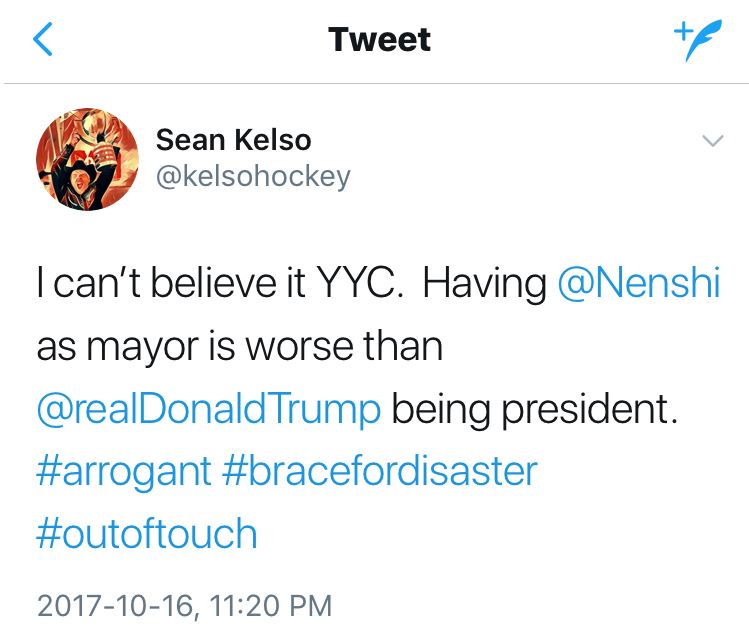 The tweet from Kelso’s account was posted at 11:20 p.m. on election night, but has since been deleted.

When asked about it by Global News on Tuesday morning, Nenshi said he doesn’t know Kelso personally.

“I have no idea who he is. I’ve never met him. But obviously, he’s a senior executive. We have had a very senior executive at the Flames regularly tweeting nasty things about me throughout the campaign, retweeting weird right-wing websites,” he said. “So they really have to determine, ‘Are they a political body, or are they a community body?’ I think they’ll figure that out pretty quick.”

WATCH: Speaking on Global News Morning, Calgary mayor-elect Naheed Nenshi responded to a tweet sent out by a Calgary Flames staffer and the ongoing arena issue.

In an email to Global News, VP of communications for the Calgary Flames, Peter Hanlon, said the organization feels “very strongly” that their staff are “entitled to their own personal opinions on political issues,” adding it is their “democratic right.”

“Notwithstanding the above, those individuals and opinions are not to be misinterpreted as representing the corporate position of the Calgary Sports & Entertainment Corporation.”

Nenshi and the Calgary Sports and Entertainment Corporation (CSEC) have been engaged in a public dispute over potential funding of a new arena.

The dispute started when Flames president Ken King said the CSEC was no longer pursuing an arena deal with the city after hitting an impasse.

Nenshi then publicly refuted King’s comments and followed up by releasing details of the arena funding proposal put forth by city council members. Afterward, King spoke publicly, saying the Flames were “not interested” in the offer.

On Tuesday, Nenshi said the ongoing debate between the Flames and the City of Calgary has been “ridiculously dramatic.”

“I said from the very beginning that the city remains at the table … and we will stay at the table, and whenever Calgary Sports and Entertainment Corporation (CSEC) is ready to come back to the table we will be there.”