The Calgary Flames have released details of their funding proposal for a new arena, which estimates the total cost of the facility in Victoria Park would be $500 million.

The proposal from the Calgary Sports and Entertainment Corporation (CSEC) has $275 million contributed by the Flames, which would be put towards the construction of the new arena, and another $225 million from a Community Revitalization Levy (CRL).

The Flames compare the $275 million to a prepayment of rent on the city-owned arena for the next 35 years.

A CRL is a loan from the province with intentions to improve districts within a city. The city then repays the money through taxes generated from new property within the designated area. The Flames point out this does not come from an existing tax source and cites the East Village as a comparison. 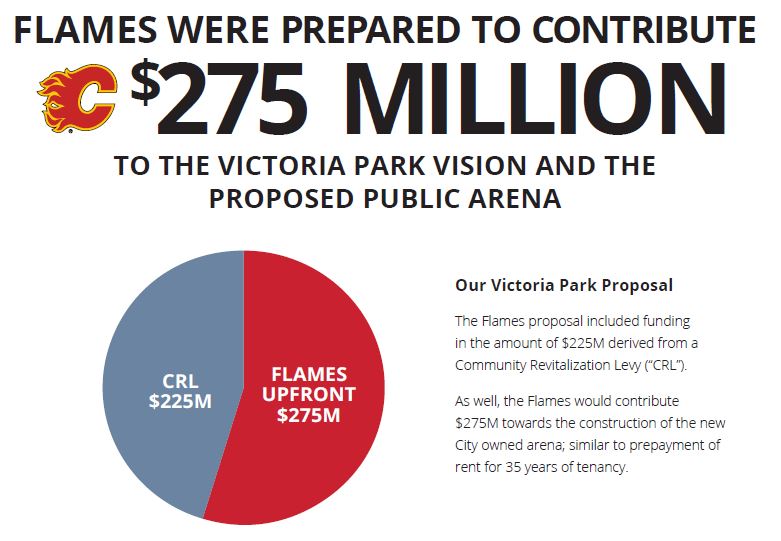 Last week, the City of Calgary released details of their funding proposal, which pegged costs for the new arena at $555 million, plus indirect costs.

The city proposed a funding formula where they would pay a third of the total cost, Flames ownership would pay another third and users would pay for the final third through a ticket surcharge — $185 million each.

In a Thursday news release, the Flames stated that the city’s proposed funding model, as presented, “did not accurately reflect the total Flames funding required.”

“Total funding by the Flames would equate to $613M, or 123 per cent of the cost of the building.” 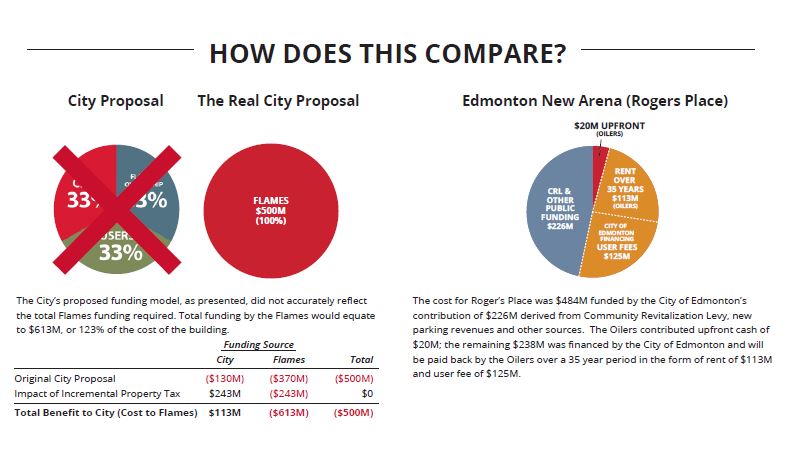 In the city’s offer, the CSEC would get 100 per cent of the revenue and profits from the arena and would pay private property taxes on the building and on the land.

In the Flames’ proposal, the City of Calgary would own the new arena.

“In a ‘small market’ city, even one with an NHL team, a privately funded arena is not economically viable,” a news release stated.

“After two years of discussions, the Flames see absolutely no basis upon which a new agreement can be achieved with the city and have concluded that there is no point to continue the pursuit of a new arena in Calgary.”

“Going forward, all efforts and energy of the Flames will be focused on the primary passion of providing the best sports and entertainment for their fans and citizens.”

The Calgary Flames stated that a privately funded arena “is not economically viable.”

“The city’s proposal is just not workable (or even for that matter, ‘fair,’ based on other arena deals in comparable cities).”

Speaking with Global News on Thursday, Calgary Flames CEO and president Ken King reiterated the organization is no longer pursing a new arena.

“We’re doing as we promised, we’re providing information, and the message hasn’t changed – we’re no longer pursuing this concept and need to move on. And I think it needs to be clear to people – and we’ve made that clear – and now we’ll just get about the business of operating our teams and having some fun and try to win some championships.”

Speaking with News Talk 770’s Gord Gillies on Thursday, King said the organization wants to “put this behind us” and focus on their business.

“There’s no further value in this debate. I think what’s important and what’s critical is that people understand that we’re moving on from it.”

The Flames estimate the annual economic impact of a new arena would be $481 million, with the creation of 5,850 jobs.

Speaking to Global News, Danielle Smith from News Talk 770 said she understands King’s position, and thinks he no longer wishes to be a “punching bag” in the municipal election.

“I know people have accused him of making this an election issue – he didn’t, it was Mayor Naheed Nenshi who did, because it was Nenshi who began his campaign by launching his Victoria Park proposal.”

“I think the reason why [Ken King] responded is that [Nenshi] continues to make this an election issue.”

Smith said she thought the Flames’ offer was a fair one.

“I think one of the things you have to consider is that the original Saddledome was paid 100 per cent by taxpayers – one third municipal, a third provincial, a third federal – because it was part of the Olympics bid. That’s the context that [the Calgary Flames are] coming from.”

Speaking with News Talk 770’s Gord Gillies on Thursday, Ward 7 Coun. Druh Farrell said she thought it was “great” the Calgary Flames would be willing to “put some of their own money in” but what concerns her is the amount they were expecting from the City of Calgary.

“They wouldn’t pay taxes, and so it would need to be other developments that would generate those taxes. Those taxes would be going into the arena, rather than back into lowering the taxes for the rest of the city or other amenities that are desperately needed.”

“CRLs can be very risky,” she added. “It’s spreading butter over too much bread … you don’t want to have more than one at a time – we already have one for East Village – but you need to know that you’ll see new development.”

“You can’t cannibalize development from another location and say that it’s paying for the CRL, you’re actually taking money from another area,” Farrell added. “What you need to see is brand new development generated.”

“It’s a very large development that wouldn’t be paying any taxes into the CRL. So it would be relying on new taxes around the site to pay for their arena.”

“What they’re saying is … you take the risk with none of the reward – and I don’t’ think that’s a partnership. A partnership you share in risk and reward.”

‘It almost looks like they see another market as more appealing’

“Ken King is saying there’s no negotiating that’s going to be going on at this point – I have to say I’m a bit puzzled by the strategy, if there is one in this.”

“Maybe he’s just given up and realized it hasn’t worked very well up until this point, and let’s just leave it until after the election.”

“It almost looks like they see another market as more appealing,” she added. “There’s a new arena in Seattle and maybe that’s where they’re looking.”

Williams said Calgarians would see benefits from the construction of a new arena, but only if it comes at the right cost.

“It’s not just about the Flames, it’s about all of the other things that can happen. Anyone who’s been to Edmonton and seen their new arena – or knows the concerts that went there and didn’t come here – knows the sort of revitalization that seems to be emerging around that arena in Edmonton sees that there could be benefits for Calgarians.”

“It’s a balance. We’re in a situation where taxes are tough, the economy is tough, we’ve got to be careful and prudent about how we go forward with this.”