The City of Williams Lake has now been placed on evacuation alert.

Kevin Skrepnek, the province’s chief fire information officer, estimates that the series of fires are a combined 15,000 hectares in size.

A wildfire in the Wildwood/Williams Lake Airport area, just north of Williams Lake, was estimated at 2,000 hectares as of Monday morning.

It was zero per cent contained as of the latest update; crews managed to anchor the base of the fire into Highway 97, allowing them to build containment lines. The focus is on protecting Highway 97 and the community of Wildwood.

The Williams Lake Airport remains closed to commercial and private aircraft. It is open to firefighting crews only.

A fire located at 150 Mile House, just south of Williams Lake, was estimated at 2,500 hectares on Monday. It’s zero per cent contained. Crews had some success Sunday in building containment lines on both the west and east flanks of the fire, but say this is a dynamic situation. The focus is on protecting Highway 97 and nearby structures.

Meanwhile, the Spokin Lake Road fire, burning about 20 kilometres east of Williams Lake, was estimated at about 300 hectares in size. It is also zero percent contained. The Cariboo Regional District has issued an evacuation order for properties in the Miocene Fire Evacuation Zone 1 relating to this fire.

A wildfire at Soda Creek, about 25 kilometres northwest of Williams Lake, was estimated at 100 hectares in size. It’s zero per cent contained and the cause is being investigated.

Another series of fires are burning in the Hanceville area, about 60 kilometres southwest of Williams Lake. These fires are estimated to be about 10,000 hectares combined. This incident involves numerous fires over a large area of approximately 25 kilometres by 40 kilometres. An accurate size estimate is difficult to ascertain due to poor visibility.

These fires have forced the evacuations of thousands, as ordered by the Cariboo Regional District.

The communities of Alexis Creek and Hanceville along Highway 20, as well as the Lexington subdivision, between Williams Lake and 150 Mile House, have been evacuated. There are also reports that some houses on Lexington Road have been destroyed.

An evacuation order has been issued for the Moore Mountain fire area and the Fox Mountain and Soda Creek area. 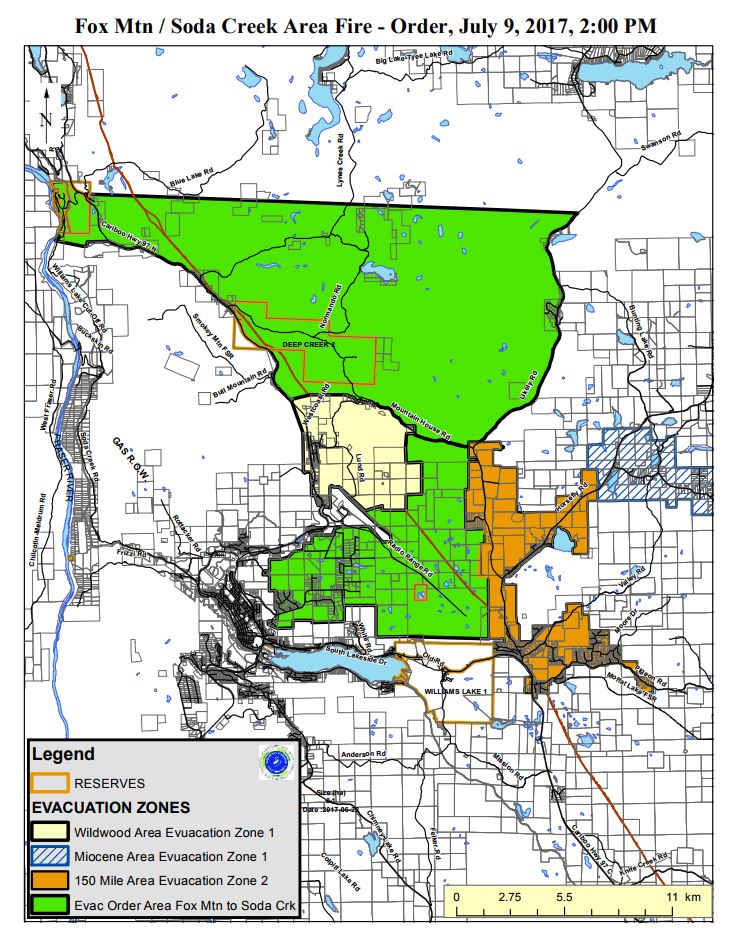 Meanwhile, a wildfire estimated at 897 hectares is burning close to Dunn Lake and it is zero per cent contained.

The Wildfire Service is responding to two wildfires near Dunn Lake, one to the west and one to the north. These fires are expected to run together to form one larger fire with a combined size of 1,300 hectares.

Some structures are threatened but no structures have been destroyed by this fire.

An evacuation order is in effect due to this fire and more information can be found on the Thompson Nicola Regional District website.