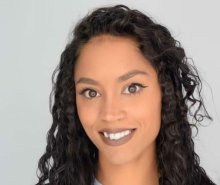 Whitney Oickle is a video journalist (VJ) who joined the Global news team as a contractor in Nov. 2018.

Born and raised in Yarmouth, N.S., Whitney made the move to Halifax to pursue journalism. She attended Nova Scotia Community College for Applied Media & Communication Arts, with a focus on radio and television journalism.

Whitney became interested in journalism while volunteering for Eastlink Community programming in Yarmouth. After completing school she began working as an independent contractor; filming social media, corporate and special event videos before getting the journalism bug.

Whitney is passionate about human interest stories and sharing community issues. When she is not working she enjoys photography, trying new foods and traveling.

02:01
Global News at 6 Halifax
Fire in a Dartmouth apartment building is investigated as arson

01:58
Global News at 6 Halifax
Halifax barbershop celebrates first anniversary by giving back to the community

02:32
Global News at 6 Halifax
Halifax marks the 74th anniversary of the Battle of the Atlantic

The mural is part of a push to revitalize the downtown area and shed Dartmouth’s moniker as the “darkside.”

The public is able to view the fruit trees until the end of September, but they are asked not to pick any of these delicious treats.

Chuck Bezanson, assistant fire chief for Halifax Fire and Emergency, says that when there’s an emergency, time is of the essence.

The aim of the pop-up playground is to teach kids and their parents the importance of unstructured play, and how taking risks is critical for healthy child development.

The former United Memorial Church was erected in the North End of Halifax in 1921 to memorialize victims of the Halifax explosion and the president of the Heritage Trust of Nova Scotia Andrew Murphy, would like to see it saved.

‘Racism causes injury to our hearts’: Protest against systemic racism held in Halifax

March organizer Raymond Sheppard says there are many untold tragedies from people who endure racism.

RCMP will be conducting strategic checkpoints across the province as a way to remind people that all drivers have a role to play in making roadways safe.

Over 400 young men from around the world are gathered at the Zatzman Sportsplex in Dartmouth with one common goal — to bring home the floorball gold.

Dozens of firefighters and multiple units responded to the call.

The province has handed out grants to 24 community organizations in the province with the goal of preventing domestic violence while also supporting victims and their families.

When Johnny “The Rebel” Mac steps into the ring, he’s not just fighting his opponent.

Police say that at approximately 4:51 p.m., officers responded to the library after a report of a person in the facility with a firearm.

Thousands of cheerleaders from New Brunswick, P.E.I., Newfoundland, Nova Scotia, Quebec and Ontario came to jump, stunt and tumble for a chance at gold.

A love of animals prompted Angela Glover and her husband to open an animal shelter and rehabilitation facility in T… twitter.com/i/web/status/1…

As FBI agents approached the building, they encountered the three remaining hostages running out, an official said. trib.al/15rMNX1

Another officer was gravely injured Friday night after responding to a domestic disturbance call, according to a la… twitter.com/i/web/status/1…