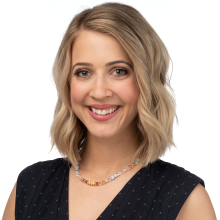 Tiffany has been a part of the Global News team since 2012.

She began her career with Global News in Regina, where she grew from weather specialist to meteorologist. In 2019, Tiffany joined the team at Global News in Calgary and expanded her skills as a digital journalist.

Raised on a farm in southern Saskatchewan, Tiffany developed an obsession with the sky and quickly learned about the impacts it can have on a person’s livelihood. Her household was regularly tuned in to local forecasts as the weather determined what the day’s events would bring around the farm. She would often sit with her siblings outside, watching storm systems come and go.

It didn’t take long for Tiffany to realize that her passion was meteorology. After studying radio and television arts at the Northern Alberta Institute of Technology, she received her operational meteorology certificate through Mississippi State University.

In Tiffany’s spare time, she enjoys being outdoors whether it’s for fishing, hiking or camping at all the wonderful parks Alberta has to offer. During the colder months, she keeps busy ice fishing, hitting the slops or finding a frozen pond to skate on. She also spends a lot of time visiting her family who is spread all over Alberta and Saskatchewan.

05:16
News
How to add holiday flare to your cheeseboards

02:51
Global News at 11 Edmonton
A look at new COVID-19 restrictions coming to Alberta

04:55
News
Black Friday deals for the tech lover in your family

03:04
Health
Why getting the flu vaccine during the pandemic is important

04:38
News
The Travel Lady: International flights during a pandemic

05:04
News
Beer and BBQ with Paddy’s Barbecue and Brewery Co.

Although it is totally different than COVID-19, some veterinary clinics are seeing up to 10 cases a day of the highly contagious respiratory disease. Continue reading →

Although the service itself will be private, CPS said a procession will follow and will be livestreamed for the public. Continue reading →

Emergency crews responded to Deerfoot Trail and 11 Street S.E. on Wednesday night after a pedestrian was hit by a vehicle.  Continue reading →

Hundreds of Calgarians lined Memorial Drive on Tuesday to pay tribute to a fallen Calgary police officer killed in the line of duty. Continue reading →

“Calgary fire crews tend to see an increase in weather-related activations of CO alarms when there is a large snowfall in a short amount of time.” Continue reading →

Highbanks Society of Calgary says the break in happened while the mothers and children were sleeping upstairs in their apartments. Continue reading →

Within a two-year period, the Calgary Police Service visited the house on 143 occasions for incidents which included a stabbing and two fatal overdoses. Continue reading →

Charges include obstructing a peace officer, assaulting a police officer and resisting arrest. The names and ages of the accused were not given. Continue reading →

For the Calgary region, 15-25 cm is expected to blanket the city by Tuesday evening. Continue reading →

Calgary police are investigating a crash that killed a 72-year-old woman last Wednesday and asking anyone with information to come forward. Continue reading →

A 61-year-old woman from Lloydminster, Alta., was hit and killed by a vehicle Tuesday evening in the area of 57 Avenue and 41 Street. Continue reading →

On Wednesday, a jury found Zaineddin Al Aalak guilty of second-degree murder and causing indignity to a body after killing his father in 2017. Continue reading →

RT @globalnews: Snow falling in the British capital on Sunday was a rare experience for some of the inhabitants of London Zoo, including we…