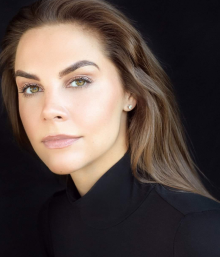 An award-winning journalist, Sarah joined the Global News team as a reporter and anchor in 2018.

She now hosts the weekend News Hour and weekend Global News at 11.

During her time with the Global News network, Sarah has covered some of the most momentous local, national, and international news stories in recent history. In November 2020, Sarah joined Global National’s team coverage of the U.S. Presidential Election, reporting on location in Oregon and Washington State. In 2019, she covered Canada’s federal election from the Green Party headquarters in Victoria—on what would become a historic election night for the Greens, and Elizabeth May’s last as party leader.

In 2020, Sarah led the network’s comprehensive national coverage of the Wet’suwet’en rights and title conflict in Northern British Columbia—spending weeks on location in Smithers, Houston, and Wet’suwet’en and Gitxsan Territory. The still-ongoing standoff over a polarizing natural gas pipeline, pitting traditional Indigenous law against the Canadian legal system, sparked protests and reckoning on Indigenous rights and reconciliation across Canada.

When the COVID-19 pandemic first hit Canada, Sarah led the network’s continuing coverage of the country’s first long-term care outbreak, at the Lynn Valley Care Centre in North Vancouver. In the years and months since, from behind the anchor desk and in the field, Sarah continued to cover the pandemic on a near-daily basis.

Other major news events that have taken Sarah on the road in recent years include the cross-country manhunt for notorious teenage murderers Bryer Schmegelsky and Kam McLeod, which began in British Columbia and ended in Manitoba; the Enbridge natural gas pipeline explosion that forced the evacuation of the Lheidli T’enneh First Nation near Prince George; and Canada’s only double-fatal grizzly bear mauling on record, in the Yukon Territories.

Before joining Global News, Sarah spent the first decade of her career with the CTV News network, based in Vancouver and Toronto.

During her time with CTV News, Sarah led the network’s award-winning coverage of British Columbia’s historic flooding in the town of Grand Forks in 2018. Sarah’s body of work, the result of nine days on the ground in Grand Forks and surrounding areas, was later recognized by the Canadian Screen Awards, the Jack Webster Awards, and RTDNA Canada—winning the Ron Laidlaw Award for Best Continuing Coverage in 2019.

Sarah also played key roles in extensive team coverage that earned multiple awards for journalistic excellence on regional and national levels during her time with CTV News: a BCAB Award for continuing coverage of the tragic line of duty death of Abbotsford Police Constable John Davidson, and an RTDNA Canada award for the network’s live coverage of British Columbia’s historical provincial election in 2017.

Sarah studied Political Science at Queen’s University in Kingston, Ontario, before graduating from the Broadcast Journalism program at the British Columbia Institute of Technology.

A fifth-generation Vancouverite, Sarah lives in Vancouver with her partner and daughter.