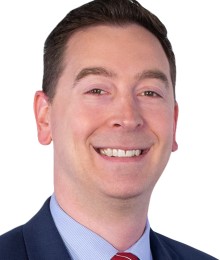 It’s been a long and winding road to the journalism world for Ryan Flaherty. He briefly studied drama at the University of Saskatchewan before diving head-first into a career with the Canadian Forces.

Ryan joined the Naval Reserve in 2001 and served as a supply technician aboard HMCS UNICORN in Saskatoon before returning to school in 2009. Ryan enrolled in the Radio and Television Arts program at NAIT in Edmonton while continuing to work part-time as a Reservist.

Upon graduation in 2011, Ryan moved to Victoria where he continued to serve with the Forces while working as a freelance print reporter with Black Press, covering everything from council meetings to bald eagle nesting habits for the Oak Bay News and other local papers.

Nearly a year later, Ryan decided to devote his energy to the reason he attended NAIT in the first place: to pursue a career in sports broadcasting.

He got his start in television at CHAT-TV in Medicine Hat, Alta., where he first worked as a news reporter before moving into the sports department and eventually being promoted to the position of sports director.

Ryan spent just over three years at CHAT before an opportunity to come home and work at Global Saskatoon presented itself. He’s excited to be a part of the Global family and to be back in Saskatoon near family and friends.

When he’s not covering the Rush, Hilltops, Huskies or Blades, Ryan enjoys travelling, live music, cycling and pretty much anything edible.

01:51
Global News at 10 Saskatoon
Saskatoon Blades prepare for life in the WHL bubble

01:04
Sports
Mike Babcock on returning to Saskatoon to coach the Saskatchewan Huskies

01:58
Global News at 10 Regina
Reigning provincial champs hoping for another shot at Brier and Scotties

The Canadian Elite Basketball League is confident that its teams will be able to play in their home markets during the 2021 season and that fans may be able to attend games. Continue reading →

The Saskatoon Blades will be wearing special helmet decals this season in honour of locker room attendant Bobby Kirkness, who was recently diagnosed with Stage 4 pancreatic cancer. Continue reading →

With only a week available for training camp this season, the Saskatoon Blades are streamlining their schedule and cutting back on the number of players invited to participate. Continue reading →

New USask men’s hockey coach Mike Babcock is eager to get back behind the bench and he’s looking to set the record straight about allegations of bullying from former players. Continue reading →

Players are wondering how a 20-month layoff will affect their performance and what happens to contracts that were signed for the cancelled 2020-21 National Lacrosse League season. Continue reading →

The Saskatoon Blades are preparing to call Regina home for the abbreviated 2020-21 WHL season, which will see the East Division teams play a 24-game schedule at the Brandt Centre. Continue reading →

Andrew Albers is hoping for another chance to pitch in the Major Leagues after spending the last three seasons playing baseball in Japan. Continue reading →

In order to preserve her final year of U Sports eligibility, Saskatchewan Huskies hockey player Bailee Bourassa is pursuing her Master’s while working as a registered nurse. Continue reading →

Saskatoon Minor Football is launching a competitive flag football league for under-16 and under-18 players. The sport is being considered for inclusion in the 2028 Olympic Games. Continue reading →

Student-athletes from the University of Saskatchewan banded together to collect nearly 450 items of winter clothing for kids at five community schools in Saskatoon. Continue reading →

The Prairie Lily Curling League is the only sports organization in Saskatoon dedicated to members of the LGBTQ2 community and their allies. Continue reading →

The 2020-21 curling season has been a quiet one so far, but some of the province’s top teams still have a chance to salvage their seasons and qualify for some major events. Continue reading →

USask Huskies men’s hockey coach Dave Adolph will retire in April after 28 seasons with the team. The Huskies have won seven conference titles during his tenure. Continue reading →

Already, COVID-19 infection rates have declined in many countries since the start of 2021, with some dramatic reduc… twitter.com/i/web/status/1…

Activists and experts say there are ways to ramp up pressure on the regime, especially by cutting off sources of fu… twitter.com/i/web/status/1…

B.C. has consumer protection laws in place which require credit card issuers to reverse or cancel charges for servi… twitter.com/i/web/status/1…