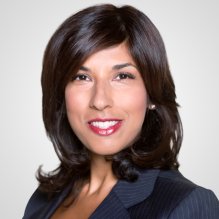 Rumina Daya is an award winning journalist who has covered stories all over the world, including the war in Afghanistan and the Tsunami in Sri Lanka, for which she won an RTDNA (Radio Television Digital News Association) award.

Originally from Calgary, she graduated with a Communications degree with a major in journalism at Mount Royal College.

Rumina’s first job as a reporter was in Guadalajara, Mexico, where she was a writer and photographer for the Colony Reporter newspaper in 1998. She then moved on to broadcast journalism, joining CTV Saskatoon as a reporter and late night news anchor before moving on to Global Edmonton, and then Global BC in 2004 as a reporter.

From immigration and criminal injustices to adoption nightmares, Rumina is most passionate about helping people conquer David and Goliath battles.

When she’s not breaking stories, she can usually be found on a dance floor. She belongs to a salsa team called the Cuban Lady All Stars.