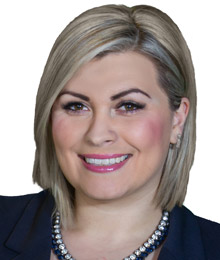 Nicole Stillger joined the Global Edmonton team in January 2020 as a digital journalist.

She began her journalism career in 2015, covering news and sports as an intern for Newcap Television in Lloydminster.

She was hired right after her work placement and quickly climbed the ranks to head anchor/senior reporter.

One of the big perks of life in Canada’s Border City was its proximity to two big military bases. Nicole had the opportunity to cover many high profile training exercises at CFB Wainwright and 4 Wing Cold Lake, even putting together a mini documentary on an international aerial combat training exercise called Maple Flag.

Nicole’s journey in the industry would take her further east and in October 2017 she started working at Global Saskatoon. She covered many big stories including the historic opening of Jim Pattison Children’s Hospital. She was also part of the Humboldt Broncos bus crash coverage – showing how the world rallied to support the grieving community.

She says the best part about being a reporter is meeting new people and sharing their stories.

Nicole is German bilingual, enjoys travelling and loves sports. She grew up watching the Oilers and bleeds copper and blue.

Nicole is happy to be back living and working in Edmonton.