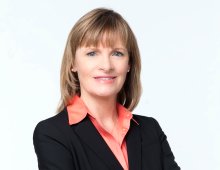 Linda Aylesworth has been with Global BC since 1981. She was hired out of the BCIT Journalism program as a director. But in 1989 finally got her wish to report. Her previous years spent studying biology lead Linda to specialize in health, science and environmental journalism.

Linda is proudest of her profession when her stories make a difference in people’s lives.

Linda was born in Toronto, lived in New York until she was 13, and then moved to Vancouver with her mother and brother.

Linda helped support herself through school by working at the Vancouver Aquarium and at the CBC where she kept the audiences happy during the tapings of various variety shows like “Rene Simard”.

When she isn’t working – her passions include photography, boating, sea kayaking and scuba diving with her husband John. Linda says her dream close encounter occurred in the summer of 2000 when an enormous bull killer whale leapt from the water just metres from her kayak in Johnstone Strait.

Linda says, “It was wonderful and I have the picture to prove it.”

02:23
Global News Hour at 6 BC
Lost senior dog found nine days after wandering away from owner in Surrey

01:28
Global News Hour at 6 BC
UBC study finds pollution did not decrease everywhere during pandemic

01:41
Global News Hour at 6 BC
Pandemic could be helping this allergy season

01:59
Global News Hour at 6 BC
Poll shows support in B.C. for vaccination certificates after the pandemic

01:46
Global News Hour at 6 BC
New study has some surprising results on mental health of children during pandemic

01:57
Global News Hour at 6 BC
Thousands of herring dumped off Vancouver Island

02:10
Global News Hour at 6 BC
B.C. and Washington State band together to battle Asian giant hornet

01:57
Global News Hour at 6 BC
BC researchers developing breath test for COVID-19

With Sheba being almost entirely blind and deaf, she cannot hear her name or respond well to a voice coming from a certain direction.

A new three-part documentary series is set to give Canadians a never-before seen look at the rescue centre’s work, from the Pacific coast to the veterinary operating room table.

The study’s preliminary results show the Pfizer-BioNTech vaccine produced a much weaker antibody result in long-term care residents than it did in younger, healthier people.

Preliminary results of the research found that 65 per cent of parents reported mild psychiatric issues and impacts with their kids over the last year.

A January landslide took out a section of the Capilano Pacific Trail on the steep west side of the Capilano canyon, but unscrupulous hikers have been ignoring its closure.

B.C. researchers developing COVID-19 breath test that could give results in 1 minute

‘What we’ve really needed this entire pandemic is testing, but we need testing in a very rapid, accurate and non-invasive way,’ said BC Cancer respirologist Dr. Renelle Myers.

Study to probe level of COVID-19 transmission in Vancouver schools

The study will use blood tests from staff members in the Vancouver School District to see how many have been exposed to COVID-19 at some point during the pandemic.

Tests at BC Children’s Hospital revealed little Alejandro Angel has a very rare and aggressive form of cancer.

“We found that competing alternatives in the compostable pod space allowed air to get in a little too quickly and so the coffee would go stale.”

It’s the latest in the school’s attempts, which have included outdoor checkers sets and outdoor ping pong tables, to move students out of the classroom amid COVID-19 concerns.

Indigenous B.C. multimedia artist David Neel has created a carved mask in the Northwest Coast style to symbolize the pandemic.

B.C.’s representative for children and youth says the province’s already “woefully inadequate” mental health system has been made worse by the COVID-19 pandemic.

Dr. Patricia Daly said it is important to allow Dr. Bonnie Henry to be a single authority on the pandemic to avoid confusion, but supports the plan to release more outbreak data.

A B.C. chef is pitching virtual group cooking classes as a pandemic-friendly alternative to corporate Christmas parties, while raising money for a charity that feeds hungry kids.

Haleigh Callison, 36, said she was healthy, active and careful about where she went and who she spent time with when the pandemic started.

A third night of anti-curfew protests in Montreal resulted in three arrests and 86 tickets. trib.al/EhBDhBM