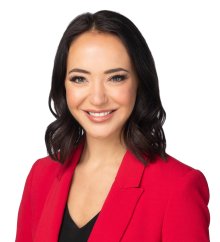 Erica Vella is a digital broadcast journalist with Global News Toronto as well as the creator, co-producer and host for the award-winning podcast What happened to…, a bi-weekly episodic podcast examining stories that once dominated headlines.

She started her career at Global News after completing a Bachelor of Fine Arts at Ryerson University for theatre and a post-graduate degree at Humber College for journalism.

Erica has produced numerous long-form features with Global News, including Cold Case Files — a series that revisited several cold case investigations. Among the stories profiled included the murder of nine-year-old Christine Jessop and the death of Margaret McWilliam, who was killed while jogging in Warden Woods Park.

She also produced #FirstTimeIwasCalled, a series that explored how people’s first brush with discrimination can often follow them into adult years. Several high-profile Canadians spoke candidly about their experiences with the hope of sparking social change and for people to gain an understanding that the words we use can have a long-term impact on others.

When she is not at work, Erica can be found reading or exploring Toronto with her dog Toby.