By Olga R. Rodriguez And Daisy Nguyen The Associated Press

The cruise ship forced to idle for days off the California coast because of a cluster of coronavirus cases aboard arrived in port Monday, and dozen of passengers — including 237 Canadians — began to leave for military bases where they would be quarantined or to return to their home countries.

The Grand Princess pulled into the Port of Oakland with more than 3,500 people aboard — 21 confirmed to be infected with the new virus. Passengers lining the balconies waved and some left the cabins where they had been in isolation to go on deck.

As the ship sailed under the Golden Gate Bridge to enter the harbour, passenger Karen Schwartz Dever said “everyone was hollering and clapping.”

Twenty-three people who needed acute medical care had been taken off the ship by late Monday afternoon, but it was not clear how many of them had tested positive for the virus, said Brian Ferguson, a spokesman for the California Office of Emergency Services.

Live TV footage showed at least one passenger, an older man wearing a face mask, climbing onto a stretcher and being lifted into the back of an ambulance. Officials have said the unloading will take up to three days.

“Our intent is to basically disembark about half the passengers today. Everyone will be screened initially today,” said Robert Kadlec, assistant secretary of Health and Human Services Services.

READ MORE: Coronavirus: Booked a cruise and want to cancel? Here’s what you need to know

Many of the nearly 240 Canadians on board left the ship after the critically ill and stood outside two tents displaying Canadian flags. Canada and the UK were among the countries sending chartered flights to retrieve their citizens.

Global Affairs Canada announced late yesterday that it had chartered a plane to fly the stranded Canadians to the air force base in Trenton, though it did not provide a timeline for when that would happen.

The Government of Canada will be repatriating Canadians aboard the #GrandPrincess.

Here is our news release: pic.twitter.com/ZuZA3WiXhl

U.S. passengers will be flown or bused from the port — chosen for its proximity to an airport and a military base — to bases in California, Texas and Georgia for testing and a 14-day quarantine. The ship is carrying people from 54 countries, and foreigners will be whisked home.

About 1,100 crew members, 19 of whom have tested positive for COVID-19, will be quarantined and treated aboard the ship, which will dock elsewhere after passengers are unloaded, California Gov. Gavin Newsom has said.

For most people, the new coronavirus causes only mild or moderate symptoms, such as fever and cough. For some, especially older adults and people with existing health problems, it can cause more severe illness, including pneumonia.

According to the World Health Organization, people with mild illness recover in about two weeks, while those with more severe illness may take three to six weeks to recover. In mainland China, where the virus first exploded, more than 80,000 people have been diagnosed and more than 58,000 have so far recovered.

In an effort to stop the virus from spreading, Italy will impose travel restrictions and other strict public health measures nationwide starting Tuesday. And a combination of coronavirus fears and plunging oil prices sent stocks on Wall Street plummeting Monday. 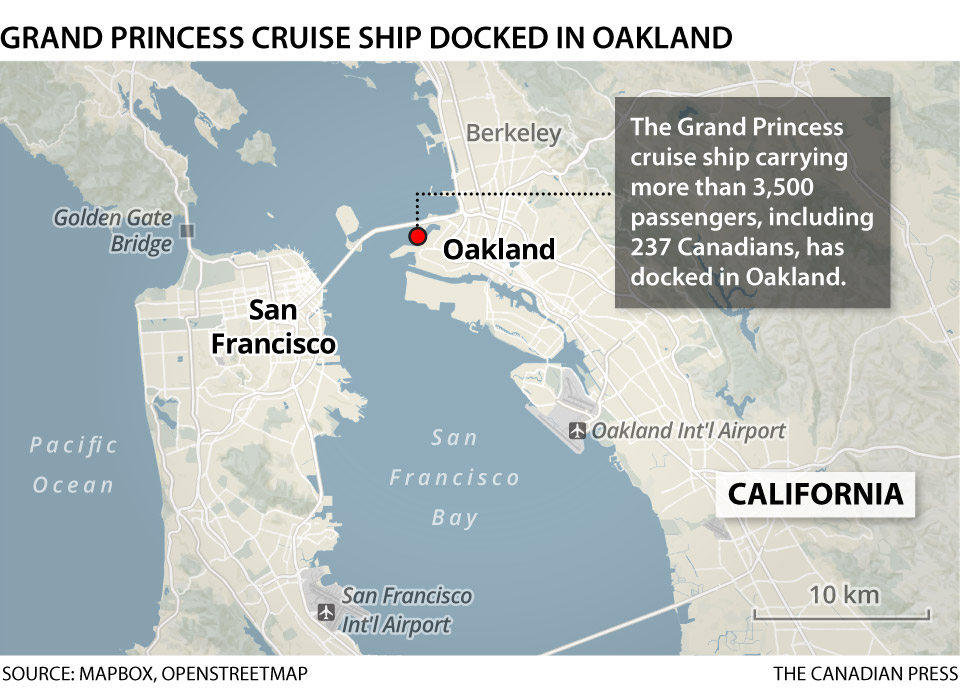 The virus has infected 600 people in the United States, and at least 26 have died, most in Washington state. Surgeon General Jerome Adams said communities will need to start thinking about cancelling large gatherings, closing schools and letting more employees work from home, as many companies have done after an outbreak in the Seattle area.

In Silicon Valley, NASA’s Ames Research Center is essentially closed with restricted access because an employee tested positive Sunday for the coronavirus. Workers will be on “mandatory telework status” and three earth science airplane missions are being delayed to later this year, the county said.

Several universities have begun online-only courses, including the University of Washington, Stanford University and Columbia University. The largest school district in Northern California, with 64,000 students, cancelled classes for a week when it was discovered a family in the district was exposed to COVID-19. Georgia’s fourth-largest school district, which has more than 93,000 students, closed its schools for at least one day after a teacher at two middle schools was confirmed to have the coronavirus.

The Grand Princess had been held off the coast since Wednesday because of evidence that it was the breeding ground for more than 20 infections tied to a previous voyage.

Passengers from the previous voyage have tested positive in California and other states. Six Canadians who were on the Grand Princess from Feb. 11 to 21 were also confirmed to have the virus.

The California governor and Oakland mayor sought to reassure people that none of the cruise ship passengers would be exposed to the public before completing the quarantine. Officials were trying to decide where the ship and its crew would go next.

The State Department warned against travel on cruise ships because of “increased risk of infection of COVID-19 in a cruise ship environment.”

Another Princess ship, the Diamond Princess, was quarantined for two weeks in Yokohama, Japan, last month because of the virus. Ultimately, about 700 of the 3,700 people aboard became infected in what experts pronounced a public health failure, with the vessel essentially becoming a floating germ factory.

— With files from Global News and The Canadian Press