On Thursday, the government released the final report from the Supervised Consumption Services Review Committee.

The report said the site in Lethbridge is the largest and most used, adding it may be facing the most problems in the province, with expressed concerns disproportionately higher than other sites.

“I think a lot of that feedback was perceived and not reality,” said Stacey Bourque, the executive director of ARCHES, which operates the Lethbridge site.

“There’s not another community or city that serves the number of usages inside the facility that we do in a day.”

The report said most of the concerns in Lethbridge were directed at the operations of the site itself, how it’s being run, the behaviour of employees, apparent lack of accountability and open criminal activity around the site.

“We need to be compassionate but we also need to listen to all the other citizens that are going through these trialing times.”

The cost of the Lethbridge site was also highlighted in the report. 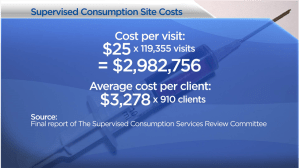 The committee said it could not find a plausible reason for such a difference in cost.

“So it’s not unusual for us to see 800-plus users inside the facility within a 24-hour period.”

No specific actions were outlined in the report as to what will happen to the sites, or if any will be closed.  Each site will be evaluated individually in the coming months.

“This is the number one issue that needs to be resolved and we need to continue to make progress and we can’t do it alone as the City of Lethbridge,” Spearman said.