The Bank of Canada is keeping its key interest rate target on hold at 1.75 per cent and forecasting a slower-than-expected start for the Canadian economy for 2020.

The central bank says in its latest forecast that the Canadian economy will grow by 1.6 per cent this year, down 0.1 of a percentage point from its projection in October.

READ MORE: Bank of Canada among central banks studying use of digital currencies

While some of the slowdown late last year is being chalked up to a strike at CN Rail and an outage at the Keystone pipeline, the central bank says the weaker figures could also signal that global uncertainty is affecting Canada more than previously predicted. 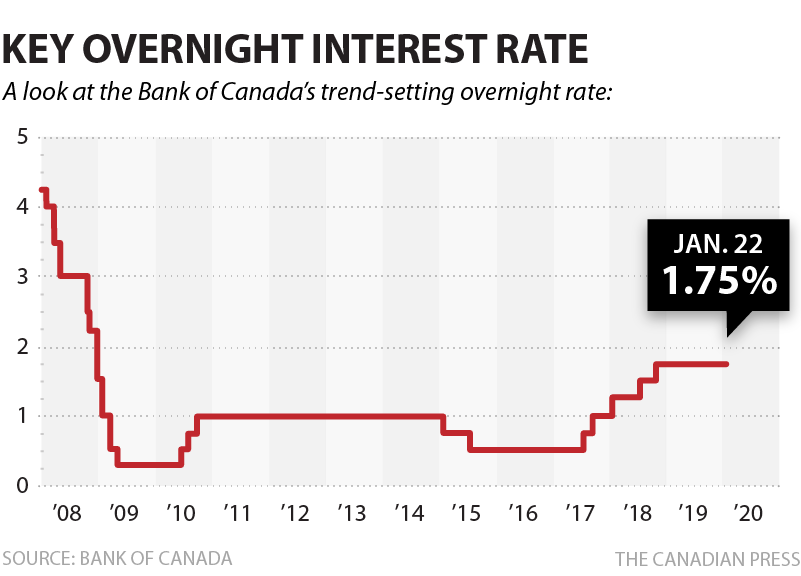 The picture the bank painted in its report Wednesday was a sharp contrast from its last look at the economy, when a degree of domestic resilience remained in spite of weaker data points outside Canada’s borders.

There is “considerable uncertainty” about how long household spending may stay soft, the report said, as households are expected to be more cautious with their spending decisions and save more in the face of high levels of debt – all this despite a federal tax cut that kicked in on Jan. 1 and growth in wages.

The bank suggested weakness in the manufacturing sector and a tightening of provincial purse strings may have a dampening effect on the economy.

READ MORE: Most of Canada’s housing market likely to be fertile ground for bidding wars in 2020

The report says ratification of the new North American free trade deal – a top priority for the Trudeau Liberals now that the U.S. and Mexico have completed their processes – and a partial trade detente between the United States and China should help stoke economic fires in Canada. Growth for 2021 is forecast to hit two per cent, up from the bank’s October forecast of 1.8 per cent. The outlook for the economy could change if the Trump administration follows through on threats to slap tariffs on France, Brazil and Argentina.

The report also cites as a risk ongoing tensions between the United States and Iran, which has already led to the tragic downing of a Ukrainian passenger jet with Canadians onboard. An escalation could roil the Middle East and likely increase the price of oil, leading to higher gas prices across the country. This report by The Canadian Press was first published Jan. 22,
2020.