Manitoba Progressive Conservatives are promising to allow grocery stores to be open on Sundays and statutory holidays if they are re-elected in September.

Leader Brian Pallister says Manitobans deserve the flexibility to buy groceries and other goods when they want.

Earlier this year, the owner of an independent chain of Winnipeg grocery stores criticized the law which requires store to close after he received a $10,000 fine for opening on a holiday.

Munther Zeid, who owns several Food Fare locations in the city, called the ticket and the law unfair at the time.

“It’s a stat holiday, a general holiday, and yet this morning I looked on the website after getting the ticket, the general holiday also shows Victoria Day, which just happened a week or so ago.

“Why can a weed store [open], on a religious holiday that both levels of government are afraid to make a change on … you can open up a weed store, a casino, and sell liquor.”

However, he said any change to the law would not impact the requirement to keep stores closed during specific hours on Remembrance Day. 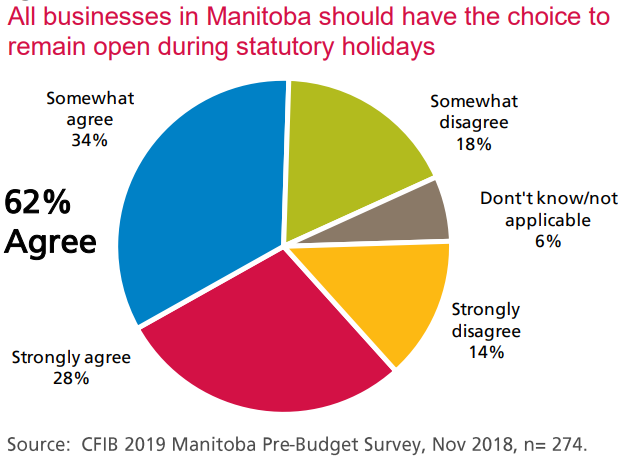 According to the Canadian Federation of Independent Businesses, a recent survey shows 62 per cent support for Manitoba stores being given the choice to open on stautory holidays, and that number increases to 68 per cent within the city of Winnipeg.

Manitobans go to the polls on Sept. 10.

-With files from the Canadian Press