Police seize 4,400 fentanyl pills, 21 kg of meth in one of the biggest drug busts in Saskatoon

It’s like nothing the Saskatoon Police Service has ever seen. Illegal substances like fentanyl and meth in such vast quantities that even authorities were shocked by what they discovered during two separate drug raids.

On Thursday, police put the seized evidence on display. 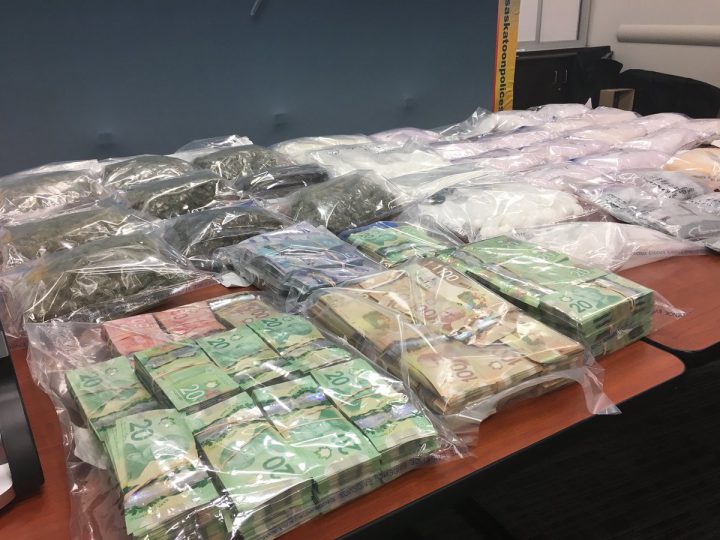 This is what 21 kilograms of crystal meth, 4,400 illicit fentanyl pills and more than 2.4 kilograms of powdered cocaine look like.

Also seized were significant amounts of crack cocaine, hash, marijuana and heroin and $400,000 in cash.

Police also seized a cocaine press and two vehicles after one of the biggest drug busts in history for the Saskatoon Integrated Drug Enforcement Team (SIDEST).

“We all know that fentanyl is causing deaths within our community and it is impossible to put a number on how many lives this investigation has saved,” said Insp. Dale Solie with Saskatoon police.

Police have confirmed this investigation is still on-going. They acknowledge that street level drug traffickers are usually not the ones calling the shots & would not disclose if the prime suspects have gang ties. #yxe #sask pic.twitter.com/4p27iNR3O4

On May 31, police took two men in their 30s into custody after observing suspected drug deals in the 100-block of 3rd Avenue South.

As a result of the initial arrests, police executed search warrants on an apartment along the same block and then a home in the 600-block of Gillies Way where police arrested two men and a woman.

Authorities would not say if the bulk of the drugs was found inside the vehicles or residences.

“This will have a significant impact in Saskatoon, surrounding area as well as potentially the entire province,” RCMP Insp. Donovan Fisher said.

The investigation is still ongoing — part of that for police will be trying to track where the drugs were brought in from.

“It’s still earlier in the bigger investigation so we’re looking into where this will all take us,” Solie said.

The five people arrested during the raids were as follows: 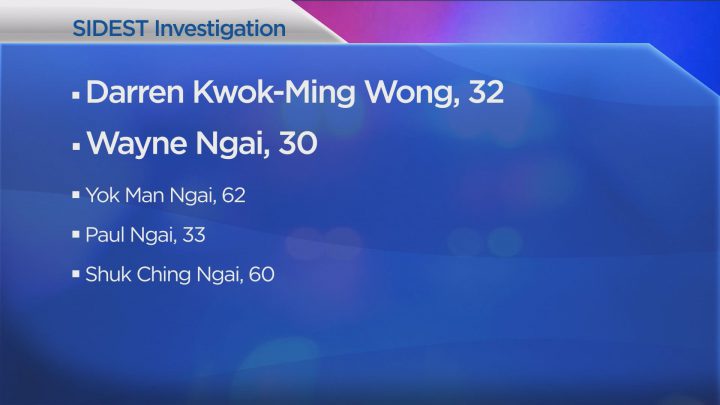 The pair of men at the top — Darren Kwok-Ming Wong, 32 and Wayne Ngai, 30, were said to be the prime targets. They remain in custody and police are investigating possible gang ties.

According to their lawyer Chris Lavier, the three were released on modest conditions: a $1,000 cash recognizance; non-contact provisions; an agreement to keep the peace and report to court.

On Tuesday, Lavier told Global News that his clients maintain their innocence and the only thing they’re guilty of is sharing a home with one of the accused.

Police would not comment further on this aspect of the investigation.

“That’s part of the investigation and I’m not going to comment on the specifics of their involvement,” Solie said. 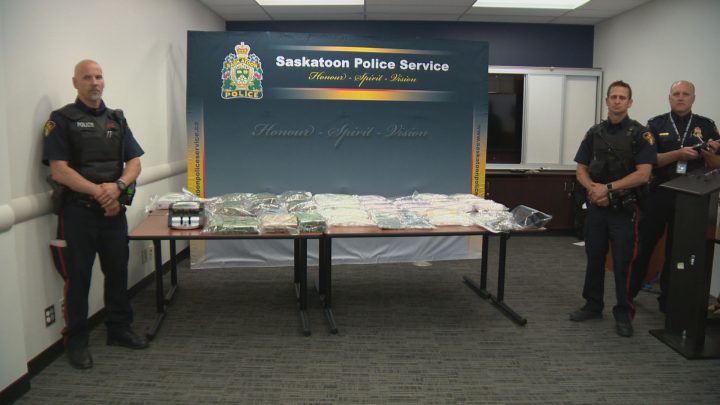 Law enforcement wouldn’t disclose the street value of the drugs either. However, an independent source told Global News that based on the purity, quality and manner of resale, these narcotics could be in excess of $1,000,000.

No weapons were recovered during the raids.

Police acknowledge the fact that street-level drug traffickers are usually not the ones calling the shots and take their orders from someone else which is why Saskatoon and other parts of the country could see a wave of arrests in the coming weeks and months.

“I don’t know how far this goes. That’s one of those things we’re going to have to look into and we’re going to open all options in the investigation,” Solie added.