An attempt at humour on a late night talk show isn’t making one Nova Scotia MLA laugh — Labi Kousoulis announced on Friday that he has sent an official complaint to Jimmy Kimmel over a discussion about the Halifax Explosion.

Kousoulis, MLA for Halifax Citadel-Sable Island and Nova Scotia’s minister of Labour and Advanced Education, said the segment — which aired on Monday — was “disappointing.”

“This event was over 100 years ago, however the wounds are still very deep and very apparent within Halifax and our Province,” writes Kousoulis.

“Families still live with the memories and hold on to photographs of loved ones.”

Rob Lowe appeared on Jimmy Kimmel Live Monday night to promote his new movie, “Super Troopers 2,” in which he plays Guy Le Franc, hockey-star-turned-mayor of a Quebec town at the centre of a U.S.-Canadian border dispute.

Kimmel and Lowe – who has filmed several projects in the Halifax area – discussed the explosion with a mix of awe at its impact and irreverent humour of a sort rarely heard in the city where about 2,000 people died.

Lowe played a clip from the movie in which Le Franc explains his nickname comes from the 1917 blast in wartime Halifax. 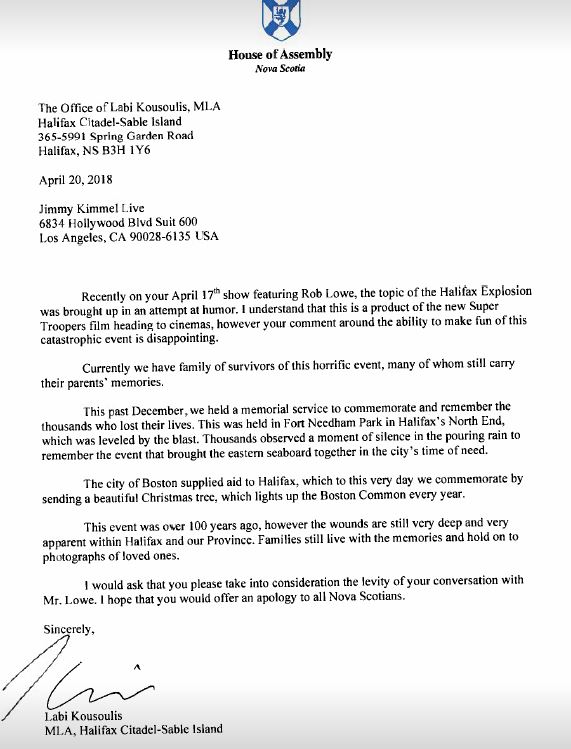 Kimmel professed to have never heard of the blast, in which a munitions ship caught fire after colliding with another vessel and exploded.

“It’s true – and I’m obsessed with it,” Lowe told Kimmel, adding the nickname was not in the original script for the movie, which opens Friday in Canada.

“My name was ‘the Explosion.’ I went to them and said I want to play ‘the Halifax Explosion.’ They didn’t know what it was,” Lowe tells Kimmel.

Lowe told Kimmel the death toll is “not good for the comedy.”

WATCH: Gladys Hazel Forrest speaks about her experience during the Halifax Explosion

In his letter, Kousoulis goes on to mention how the city of Boston came to Halifax’s aid in the wake of the explosion — adding that Nova Scotians commemorate the act by sending a Christmas tree that lights the Boston Common every year.

“I would ask that you please take into consideration the levity of your conversation with Mr. Lowe. I hope that you would offer an apology to all Nova Scotians,” he wrote.