Read Steve Irwin’s touching letter to his parents, found years after his death

A letter written by Steve Irwin (a.k.a. The Crocodile Hunter) to his parents, penned when he was 32, has been discovered nearly 10 years after his death.

Steve died after being stabbed in the chest by a stingray barb in September 2006 while filming an ocean documentary.

In the letter, Steve thanks his parents Bob and Lyn, and expresses gratitude for all they’d done for him. The letter is published in its entirety in Bob’s memoir, The Last Crocodile Hunter: A Father and Son Legacy, out on Oct. 25.

Bob revealed that he found the letter this year when it fell out of a book he was reading. 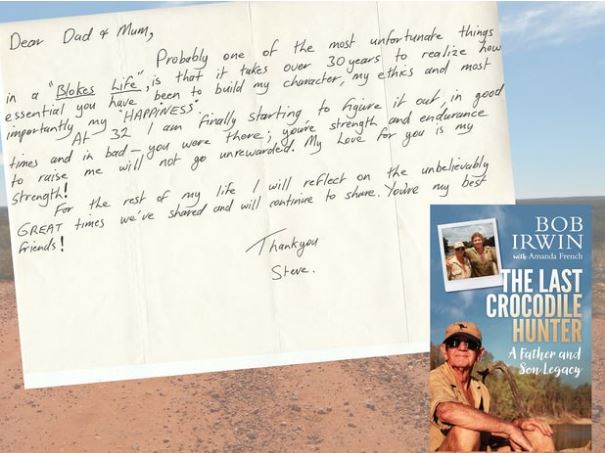 On the envelope the letter was contained in, Steve had written, “Please be happy to know that your strength and wisdom have been passed on.”

“Probably one of the most unfortunate things in a ‘Bloke’s Life’ is that it takes over 30 years to realize how essential you have been to build my character, my ethics and, most importantly, my HAPPINESS,” wrote Irwin, 12 years before his death. “At 32, I am finally starting to figure it out. In good times and in bad, you were there. Your strength and endurance to raise me will not go unrewarded. My love for you is my strength! For the rest of my life I will reflect on the unbelievably GREAT times we’ve shared and will continue to share. You’re my best friends!”

Bob and Lyn are both naturalists, as Steve was, and they instilled that same passion for wildlife and the outdoors in their son.

Steve left behind his wife Terri and his kids, daughter Bindi and son Robert.

On Bindi’s 18th birthday, she posted a tribute photo of herself with Steve.

Hello lovelies. Well today marks 18 years of life for me, here in Australia and I really don't know where to begin in thanking so many people for an unforgettable journey so far. So I think that I'll start here, with this photograph. This photo was taken within the first year of my life. To be perfectly honest life has changed in a million ways since this photograph was taken. Along the way we gained another incredible part of our family, my brother Robert. Our conservation work with Wildlife Warriors took off around the world. Our home, Australia Zoo continued to expand and has become the greatest zoological facility on planet earth. Our Dad, Mum's soulmate and a superhero for us all, passed away. However, since this photo was taken, 18 years ago, one life ingredient has remained, unchanged, unbreakable. That is the unconditional love that is shared between my beautiful little family and the loyalty we have to eachother and everyone else who has taken this journey with us. I don't think that when this photo was taken even my beautiful parents could have known what life would evolve. I know that I am endlessly grateful for the love and light I have been given since Day 1 of my life.

Bindi has followed in her father’s footsteps by helping to contribute to wildlife preservation and conservation. She donates 10 per cent of all her earnings to Wildlife Warriors, a charity founded by her family in 2002.

READ MORE: Bindi Irwin breaks down during emotional tribute to her late father

In October 2014, Bindi was awarded Young Conservationist of the Year by the Australian Geographic Society.