A wide-ranging report gauging Toronto’s “vital signs” has uncovered some cheering and some disappointing news on poverty, crime, transit and other issues facing the city.

Published Tuesday, the report from the Toronto Foundation uses findings from Statistics Canada and other sources to analyze 12 areas of civic concern.

Here are five significant results from the Vital Signs report.

Some alarming statistics are on the rise for Canada’s largest city; the report says Toronto has the “dubious distinction of being Canada’s capital of working poverty.”

The income gap between the richest one per cent and the remaining 99 is now the second-biggest in Canada.

The number of Canadian seniors is on the rise, and so is the number living in poverty. Almost 12 per cent of seniors living in Toronto are below the poverty line, marking a small but gradual increase from previous years.

Overall employment is up slightly over 2013, but “precarious employment” is also on the rise.

Fewer than half of workers in the GTHA have full-time permanent employment with benefits. More than 50 per cent are working in temporary, part time or other less-secure jobs. 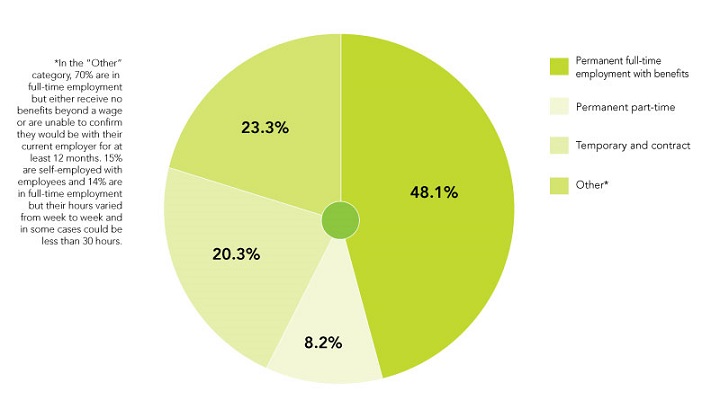 The report says Toronto continues to be one of the safest metropolitan areas in Canada.

A vast majority of residents say they feel safe in the city, and criminal offences are generally on the decline.

The murder rate though, is staying stable. There were 57 homicides in Toronto last year, the same number as in 2013 and one more than in 2012.

Always a troublesome issue in Toronto, the report digs up some telling statistics on the city’s transit woes.

Toronto ranked 15 out of 22 metropolitan cities (in North America or globally?) with an average 33-minute commute, the longest in Canada.

A major cause would be our reliance on the car, since 71 per cent of commuters are taking cars to work.  That leaves just 29 per cent who take transit, walk, cycle, or travel by any other means that would help reduce gridlock.

The report notes that most North American cities are similarly car-dependent, but also compares us to a city like Hong Kong, where a whopping 88.5 per cent don’t take a car.

About six in 10 Torontonians say they’re in good health, but some alarming numbers still emerge.

In particular, more than 50 per cent of Torontonians now say they’re either overweight or obese. On top of that, fewer people are keeping active;  the number of people who say they’re at least “moderately active” during their leisure time has dropped to just 46 per cent.

The results seem to speak for themselves, as heart disease remains far and away the leading cause of death in Toronto.