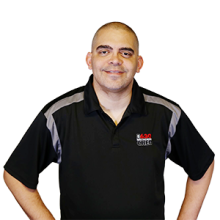 Thomas Dias is a radio reporter and news anchor at Global News Radio 880 Edmonton and 630 CHED.

Born and raised in Edmonton, Thomas has ties to the Cayman Islands, where his mother met his father on holiday.

Thomas spent years working in sales and was repeatedly told he was wasting his voice until he took a broadcast degree in Vancouver. That led to two years of cutting his teeth with Peace River Broadcasting in the beautiful town of Peace River in northern Alberta.

When what is now Global News Radio 880 Edmonton first changed to an all-news format, Thomas was hired as an early morning writer before moving on to reporting and anchoring for 630 CHED.

He loves biking through the river valley or hitting the ski slopes whenever possible, as well as hitting the patio with good friends.