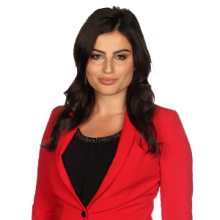 Marney Blunt is an award-winning journalist for Global News and the host/producer of Focus Manitoba. She joined the Global Winnipeg team in September 2019.

Marney was previously with Global News in Saskatchewan, where she anchored both morning and evening newscasts, reported, produced, and was the host/producer of Focus Saskatchewan. In 2020, Marney received the international Edward R. Murrow award for best documentary for ‘Still Searching: The Disappearance of Mekayla Bali’, a story about a Saskatchewan teenager who vanished without a trace in 2016. Marney also received several regional and national RTDNA awards while hosting Focus Saskatchewan, including for coverage of the Humboldt Broncos hockey tragedy.

Prior to her time in Saskatchewan, Marney worked as a news anchor in Dawson Creek, BC and before that, she worked as a chase producer and back-fill reporter at CTV News Winnipeg. At the start of her career, she worked for several local newspapers and newswires in Manitoba and Ontario.

In her spare time, Marney can be found doing anything outdoors. She loves fishing, snowboarding, hiking, spending time at the family cottage in the Whiteshell Provincial Park, and looking after her horse. She also enjoys listening to Tom Petty and attending as many rock concerts as she possibly can.