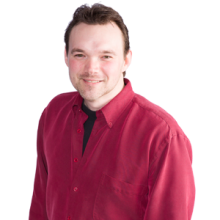 Born and raised in London, Ontario, Gerry Richardson attended Canadore College in North Bay, Ontario. After graduating with a Radio Broadcasting Diploma, Gerry applied to radio stations clear across Canada, Australia, and the UK. He was hired as a sports producer in his hometown of London, where he had to learn about all kinds of sports… all kinds of quick.

Gerry worked his way through just about every job at the London station, from Board Operator to Remote Broadcast Expert, to Commercial Producer and fill-in for the Assistant Program Director.

He went on to work as a Programming Producer and Midday Host at a mid-western Ontario station before continuing his journey west to Winnipeg. Gerry landed a Morning Show Producer position at 680 CJOB where he spent his mornings shaking his head and adding commentary from behind the glass.

“Behind-The-Glass Gerry” left the Winnipeg radio team in the summer of 2018 to join the television team as a Producer with Global News at 10.

Ducklings waddling by traffic on Canada Day in Emerson were given safe haven by Canada Border Services Agency. Continue reading →

A teenage girl is dead after she was hit by an alleged drunk driver on a Manitoba reserve. Continue reading →

The Independent Investigation Unit says officers will face no charges after a man suffered a broken rib during arrest in Thompson. Continue reading →

A man and a woman are in custody while a third suspect remains at large after a woman was assaulted in her home and a man was hit by a car. Continue reading →

When she warned the army that Myanmar would become isolated, the U.N. special envoy said, “the answer was, `We have… twitter.com/i/web/status/1…

Bill Magness was grilled for hours by Texas state lawmakers last week for leaving power prices at up to 450 times t… twitter.com/i/web/status/1…

Here’s what we have learned so far about the failures that led to the Jan. 6 insurrection at the U.S. Capitol as la… twitter.com/i/web/status/1…