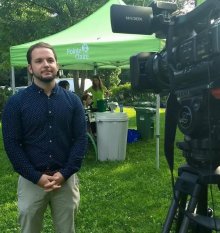 For as long as he can remember, Dan Spector has always wanted to be a journalist.

He studied media at John Abbott College not far from where he grew up in Dollard-des-Ormeaux (DDO), then went on to study journalism at Concordia University in Quebec.

After graduating, he got his first job in media at CJAD radio, where he worked for five years as the afternoon drive producer for Aaron Rand.

During that time, a show he produced for the Lac-Mégantic train disaster won the National RTNDA Peter Gzowski Award.

Dan soon branched out into reporting and hosting, becoming a regular replacement host on the CJAD evening show.

In 2016, he left his radio job to become a TV reporter at MAtv, but continued to contribute to CJAD as a part-time reporter and host.

In the spring of 2017, he left MAtv to join Global News as a photojournalist.

Dan is a big movie and TV buff and loves being a tourist in his own city, going to concerts and seeking out the best food in Montreal.