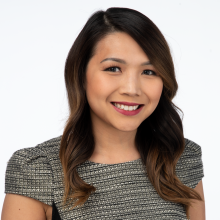 Christa Dao is now a member of the Global BC reporting team.

She previously joined the Global Calgary team in October 2017.

Before coming to Calgary, she spent nearly two years at Global Regina. And before that, Prince Rupert, Terrace, Toronto, Vancouver and a brief military exercise at CFB Wainwright.

She has covered many major stories in Saskatchewan including Prince Charles and Camilla’s royal visit, the resignation of Premier Brad Wall, Regina’s worst drought in 130 years, and the tragic first-degree murder of Hannah Leflar.

One of her most notable moments was when she and a photographer were sent out of town to cover a story and the two of them weathered a blizzard to get it. They ended up being stranded for three days.

Alberta is Christa’s fourth province that she now calls home. Originally from Vancouver, she is thrilled to be back near the mountains and forests. She is a rookie Rubik’s Cube solver and wannabe dog owner. When she’s not chasing stories, she’s on the hunt for the best phở in the city.