Canada’s GDP dropped at annualized rate of 38.7% between April and June: StatCan

The Canadian economy suffered its worst three-month stretch on record in the second quarter as the economy came to a near halt in April before starting to recover in May and June.

Statistics Canada said Friday real gross domestic product contracted at an annualized rate of 38.7 per cent for the quarter, the worst posting for the economy dating back to when comparable data was first recorded in 1961.

Almost every single component of the economy used to calculate GDP was at its lowest point during the three-month stretch — driven largely by widespread lockdowns in April meant to slow the spread of COVID-19.

READ MORE: Mortgage deferrals will soon end for many Canadians. Then what?

However, economic output rebounded in May by 4.8 per cent, and the agency said June saw an increase of 6.5 per cent, a monthly record, beating the 5.6 per cent preliminary forecast.

The agency’s preliminary estimate for July indicated a three per cent increase in real GDP, which on its own would have been a monthly record prior to this year, BMO chief economist Douglas Porter said.

The economy is starting to come back faster than most expected, and the decline in the second quarter wasn’t as steep as predicted, he said.

“That means that the damage wasn’t quite as bad as we thought in the second quarter and the early stages of the rebound have gone about as well as could have been reasonably expected,” he said in an interview.

“It’s the direction here that counts.”

Even with the gains in June, economic output remains about nine per cent below pre-pandemic levels, Statistics Canada said. Gains in the third quarter likely won’t recover all that was lost as some businesses remain unable to open even as restrictions are rolled back.

TD senior economist Brian DePratto wrote that the new data suggest the shape of the recovery could look more like a “K” where some sectors rebound well, while others are left behind. 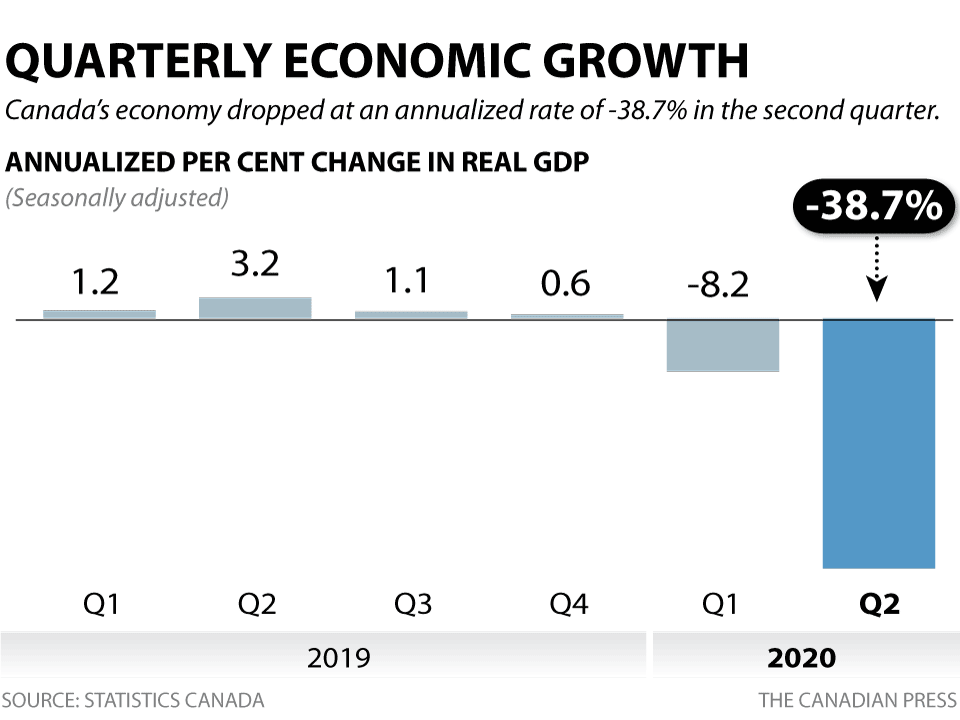 The record decline in output in the second quarter was fuelled by record drops in spending as businesses stayed closed, Canadians stayed home and millions were put out of work.

Household spending dropped 13.1 per cent in the quarter, and business investment fell 16.2 per cent, Statistics Canada said. Employee compensation fell by 8.9 per cent, the steepest drop ever recorded, as workers were laid off, furloughed, or had their hours slashed.

Federal emergency aid, including the Canada Emergency Response Benefit, more than offset that drop, the agency said, noting a 10.8 per cent increase in household disposable income. That drove up the savings rate from single digits to 28 per cent, “potentially leaving some extra cash for spending” in the coming months, said CIBC’s Royce Mendes.

Overall, federal benefits increased by 193.5 between April and June compared with the same period last year, hitting almost $70.6 billion, not including the wage subsidy program that cost $22.7 billion over that time, the Finance Department said Friday.

The most recent figures show the government has spent almost $30 billion in wage subsidies, and nearly $71.3 billion through the CERB.

The Liberals are proposing a $37-billion income-support package that would extend the CERB by four more weeks before winding it down and replace it with a trio of benefits and changes to employment insurance, which will add to the $343-billion record deficit.

Economist and consultant Roslyn Kunin said the massive spending made sense early on in the crisis, but it may not as the economy emerges from crisis mode.

“They have put out the fire, they have saved us from a 1930s depression, we are in slow economic times, but we’re getting back into a situation that … could be normal for five or 10 years,” said Kunin, a former B.C. regional economist for the federal government.

“To continue what has become more extravagant deficit spending may not be the wisest thing because now we’re in it for the long-term.”

On Thursday, credit rating agency Fitch Ratings said government spending will remain high while economic activity takes years to recover, and warned it may have to further downgrade the country’s credit rating if deficits and debts weren’t brought under control.