British Columbia reported 68 new cases of COVID-19 on Thursday, along with another death in long-term care.

It brought the province’s death toll because of the coronavirus to 204.

Active cases edged back up to 906 after dipping slightly the day prior, provincial health officer Dr. Bonnie Henry said.

There was one new community outbreak involving seven people at a construction site for a water treatment facility near Elkford, B.C., said Henry. Six of the cases are Alberta residents.

For the first time, B.C. also reported on suspected cases of multisystem inflammatory syndrome in children, a condition also known as MIS-C that’s associated with COVID-19.

Eight potential cases have been identified, Henry said, but none of them had tested positive for the coronavirus, had contact with someone who had it, or had developed antibodies.

The five boys and three girls were all hospitalized.

“MIS-C is very similar to a rare childhood condition that’s known as Kawasaki disease. And we have seen children with that condition every year,” Henry said.

“Fortunately, most patients with either condition recover completely, and that is the case with the eight people here in British Columbia.”

The province has begun to report such cases because of a change in case definitions nationally, she added. 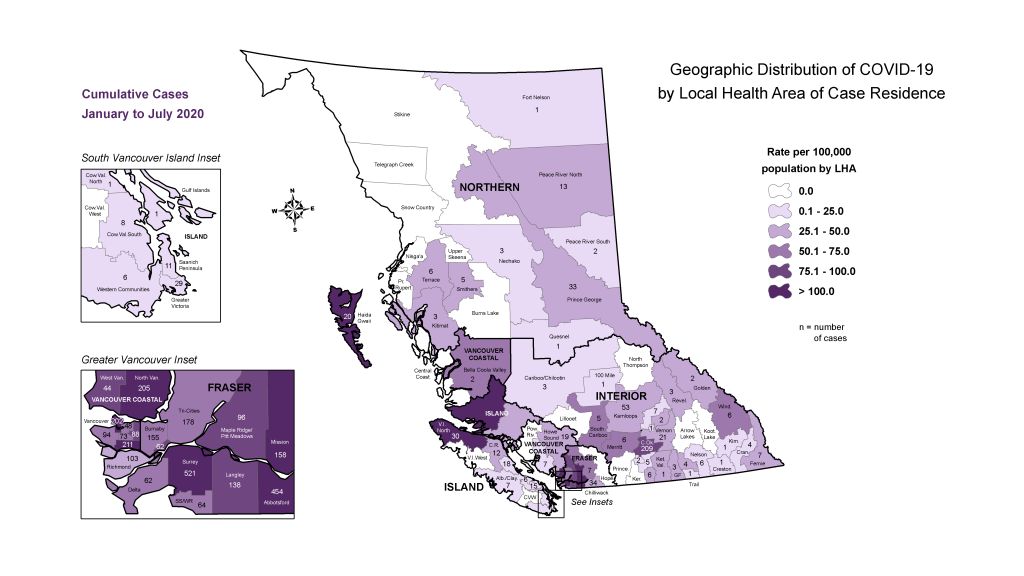 “Virtually every part of our province has been touched by COVID-19, communities large and small and geographically dispersed,” said Henry.

“These are the cases who were tested or who were epidemiologically-linked to COVID-19, and we know that there are additional people who were infected with COVID-19, particularly in the period of March and April, when we had limited testing.”

About a third of B.C.’s cases were now related to events, a third linked to families and community groups, about a third were related to other exposure evens including workplace clusters and long-term care homes, said Henry.

The number of people isolating due to possible exposure also climbed by 80 to 2,810.

Twenty-two people remained in hospital, with seven of them in critical care.