Erin O’Toole is the new leader of the Conservative Party, wins on third ballot

The second time, as it turns out, is the charm: Erin O’Toole will be the new leader of the Conservative Party of Canada.

The Durham MP won the race to replace Andrew Scheer as leader of the party in a physically distanced hybrid convention Sunday night. That capped off a campaign forced to pivot repeatedly to adjust to life and politics in the midst of the coronavirus pandemic.

This race was the second at bat for O’Toole after he previously ran and lost to Scheer in the 2017 Conservative leadership race, taking third place in that campaign.

But O’Toole clinched the win on the third ballot in a reveal that came roughly six hours after it had been scheduled to take place Sunday at 6 p.m. ET but stretched into Monday morning after repeated delays.

Conservative officials said thousands of ballots were damaged by machines used to open the envelopes containing the ballots, and had to be closely scrutinized to ensure they were accurately tallied.

Party members have for weeks been mailing in their ranked ballots for who they want to replace Andrew Scheer as the next leader of the Conservative Party and the campaigns were forced to shift from the normal course of in-person outreach and fundraising to digital activities.

In a victory speech early Monday morning, O’Toole thanked his wife and two children for their support during the eight-month race, and promised to take the role seriously.

“Today you have given me a clear mission: to unite our party, to champion conservative principles, to show what we know so well,” he said, accusing Prime Minister Justin Trudeau of failing to look out for Canadians.

“We will be proposing a vision of a stronger Canada: a more united and prosperous Canada.”

He vowed to be ready for an election that could come as soon as this fall but did not make a specific pledge on a time frame for when he could try to topple the government.

“I love this country and I’m very worried about the course we are on,” he said, arguing the stakes were high when he started his leadership campaign back in January.

“They are even higher today. Our country is currently facing its most serious economic challenges since the Great Depression,” he said.

READ MORE: A look at the new Conservative leader and what he is promising

“People are losing faith in Canada because of the ideological and out-of-touch policies of the Liberals.”

O’Toole reached out to Canadians from across the country, making a broad pitch for appeal to Quebecers, LGBTQ2 Canadians, Indigenous Canadians, union members and recent immigrants.

The Conservative leadership race was conducted via ranked ballot in which candidates won points based on the percentage of the votes they got in each of the country’s 338 ridings.

The first ballot results finally got underway shortly after midnight. 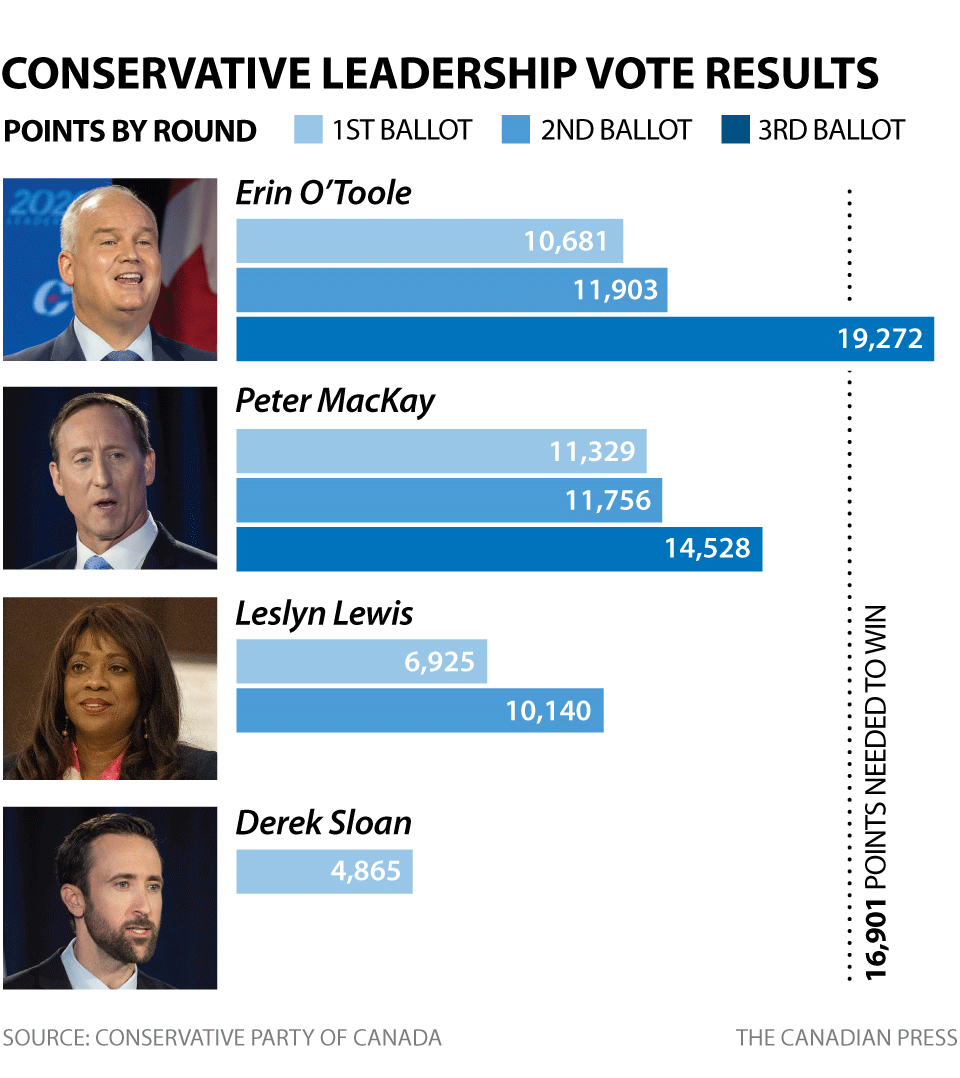 With a total of 33,800 points up for grabs, former Nova Scotia MP Peter MacKay — one of two frontrunners along with O’Toole — would have needed 16,901 points to win outright on the first ballot.

Social conservative rookie MP Derek Sloan got just 4,864 points or 14 per cent, and dropped off the ballot; his supporters’ second-choice votes were then distributed among the remaining candidates.

Once the ranked ballot preferences of Lewis supporters were tallied, MacKay’s points increased to 14,528 while O’Toole’s rocketed up to 19,271 points, clinching him the victory.