Hamilton shed close to 46,000 jobs between February and May, according the latest numbers from Statistics Canada and the Financial Accountability Office of Ontario (FAO).

Since the beginning of the COVID-19 pandemic, employment has dropped 10.7 per cent in the Hamilton census metropolitan area (which includes Burlington and Grimsby) with many of the jobs lost in the accommodation and food services industry, which slipped 13.4 per cent.

Manufacturing and health care also suffered with drops of 9.8 and 9.5 per cent respectively in the metro area, according to StatsCan. 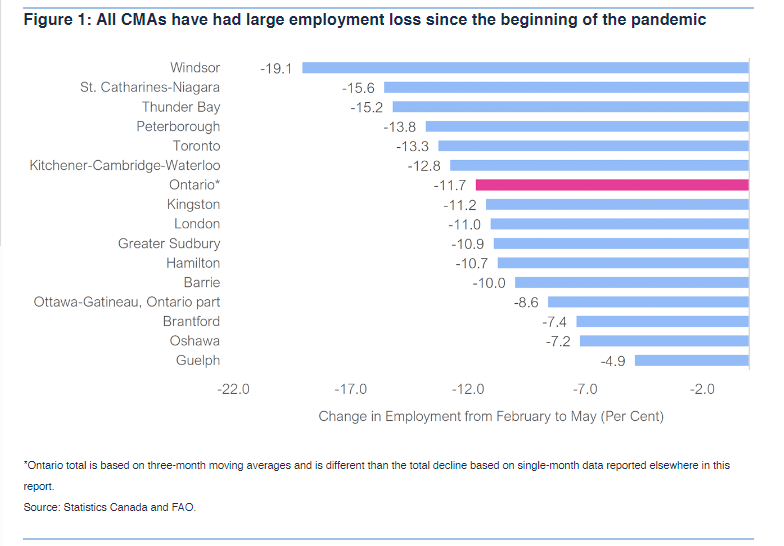 The city’s unemployment rate doubled during the last four months moving from 4.9 per cent to 10.3 per cent at the end of May.

Niagara was the second hardest-hit region in Ontario losing close to 32,000 (15.6 per cent) of its jobs since February.

Accommodation and the food services industry was also the hardest hit by COVID-19 with Niagara losing 11.6 per cent of jobs in that category. 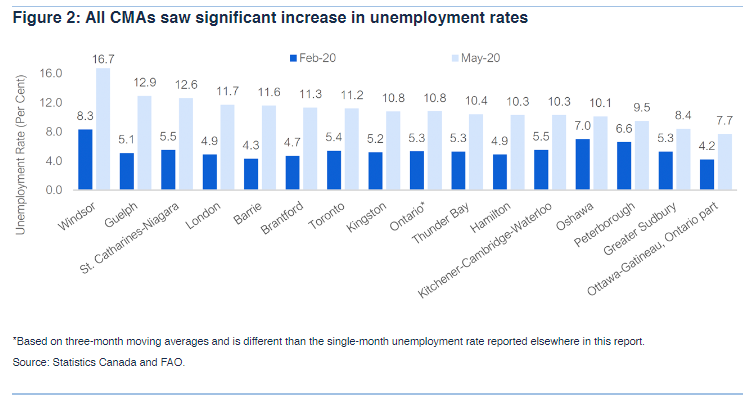 Windsor was most affected by the pandemic in Ontario, as employment declined 19.1 per cent between February and May, equating to about 32,000 jobs.

Guelph was the least affected region losing only about 4,000 jobs.

In Ontario, the FAO estimates that 2.2 million workers either lost a job or had their hours significantly reduced as a result of a pandemic-related shutdown. The losses shifted the province’s unemployment rate to a record high of 13.6 per cent in May, as more people started to look for work.

Employment in Ontario declined for the fourth-straight month in May shedding another 64,500 jobs, after losses of 689,000 in April and about 403,000 in March.

Jobs Lost by Industry in Hamilton (February to May 2020)