The Okanagan Forest Task Force says illegal dumping sites in the region are growing, and that the novel coronavirus pandemic is playing a role in the blight.

On Thursday, the task force issued a press release saying it has been finding many new dumpsites along Okanagan backcountry roads.

Task force spokesperson Kane Blake says “illegal dumping is on the rise at the moment and growing fast.”

As to why illegal dumpsites are growing in number, he says it’s a side effect from COVID-19 lockdowns, with more people staying home and performing more spring cleaning and yardwork, but unable to access their local dump.

Blake said another contributing factor could be that lineups at local landfills are far longer than they usually are at this time of the year.

However, Blake attributed some of the new dumpsites to the hiring non-reputable spring-cleaning haulers.

He said “a simple Facebook search shows lots of people looking to hire people for dump runs, but the real question is how much of it is actually making it to the landfill.” 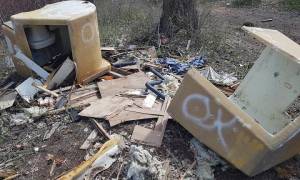 Another illegal dumpsite in the Okanagan.

Blake says if you’re going to hire someone for a dump run, keep track of names, conversations and proof of payment.

That way, he said, if your information is found at an illegal dump site, you can help prove who dumped it.

2:10 Illegal dump site near Apex has some local fuming

“We need to start holding people accountable and not let them think this is okay to do,” said Blake.

“I just hate to see our beautiful forests turning into landfills from ignorant people being too lazy to go to the landfill.”

He added that the task force’s goal is to bring public awareness to the issue and its impact on forested areas.