READ MORE: Did you get 2 CERB payments? It’s not a mistake, minister says

The unemployment rate jumped 2.2 percentage points to 7.8 per cent, the largest one-month increase since comparable record-keeping began in 1976. The previous record was the 125,000 jobs lost in January 2009.

Prime Minister Justin Trudeau acknowledged the “stark” numbers in his daily news conference on Thursday, but said they’re “no surprise.”

“We all knew this was going to be a tough time… but that’s no comfort if you’re out of a job, if you’re having difficulty making ends meet,” Trudeau said.

Once the country gets through the first wave of the virus, the government hopes to be able to open up the economy to a certain extent and lift some of the restrictions in place right now, the prime minister added in French.

Thursday’s numbers also found that of those who were still formally employed in March, 2.1 million either worked less than half their usual hours or didn’t work at all in the week of March 15 to 21, when Statistics Canada collected the data.

“These 2.1 million Canadians who saw their hours dramatically reduced could be seen as at risk of losing their job in the months to come,” CIBC economist Royce Mendes wrote in a note to clients.

Overall, 3.1 million Canadians either lost their jobs or were forced to work significantly less than usual, if at all, because of COVID-19, the numbers show. 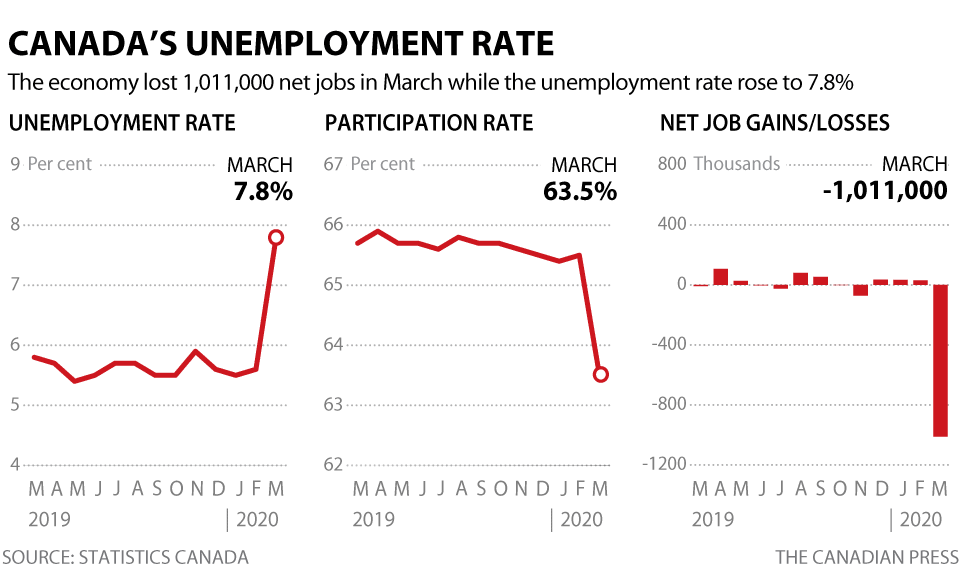 Statistics Canada said the data did not completely capture the extent of the job losses since the agency polled respondents before the crisis began to take its full toll. Analysts in a Reuters poll had forecast a loss of 350,000 jobs and an unemployment rate of 7.2 per cent, up from the 5.6 per cent seen in February.

READ MORE: The new COVID-19 benefit for workers has launched — Here’s how to apply

More than 5 million Canadians had applied for all forms of federal emergency unemployment help since March 15, government data showed on Thursday, suggesting the real jobless rate is closer to 25 per cent.

The highest unemployment rate in the same data period was the 13.1 per cent seen in December 1982.

READ MORE: No job and no more EI — but she can’t access the new COVID-19 benefit

The Bank of Canada slashed its overnight interest rate three times in March to 0.25 per cent and launched what analysts called its first quantitative easing program as it tries to shield the economy from the impact of the coronavirus outbreak and low oil prices. The central bank’s next interest rate decision is set for April 15.

“Interest rates will be at these levels for more than a year. The Bank of Canada will continue with the quantitative easing program until the recovery is well underway,” said Andrew Kelvin, chief Canada strategist at TD Securities.