By Craig Wong The Canadian Press

The Canadian job market bounced back in December to post a gain of 35,200 jobs and reverse some of the losses in November which saw the biggest monthly loss since the financial crisis.

The increase in the number of jobs came as the unemployment rate also fell to 5.6 per cent compared with 5.9 per cent in November when the country lost 71,200 jobs.

Statistics Canada said Friday the gain in jobs came as the number of private sector employees rose by 56,900, offset by a loss of 21,500 public sector jobs. The number of self-employed fell by 200.

Robert Kavcic, senior economist at BMO Capital Markets, said the jobs report will allow the Bank of Canada to breathe easier, as the job market finished 2019 on a solid note following some weakness in October and November.

Story continues below advertisement
“This should help ease the Bank of Canada’s concern at least that the labour market wasn’t really breaking down at the end of 2019,” he said. 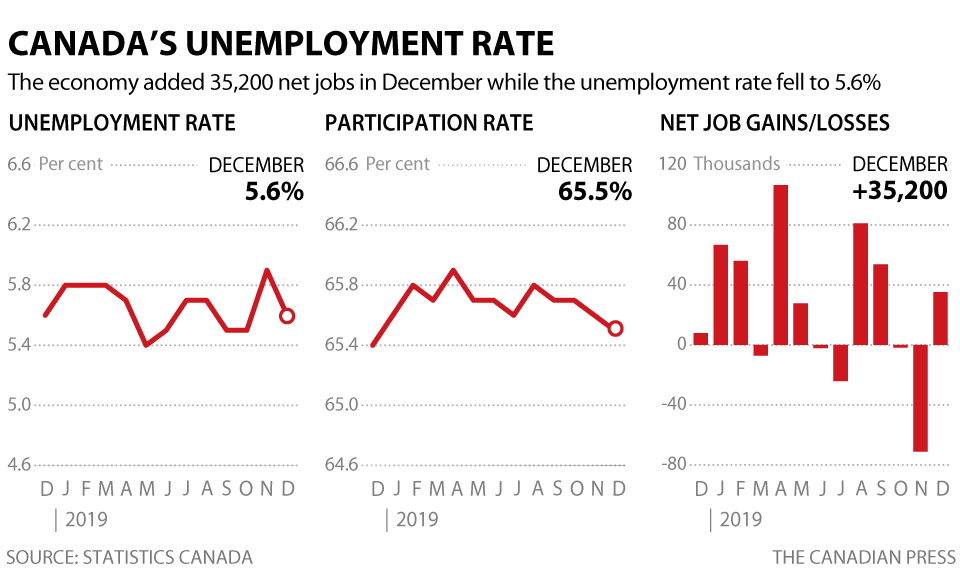 Kavcic said the job losses in November were a “recession-like” figure, but the other economic data didn’t corroborate the report.

The jobs report is notoriously volatile, but the trend in the second half of last year was softer than the start of the year.

Kavcic said he doesn’t expect to see a return to the job gains seen in the first half of last year after the weakness in the fourth quarter of 2019.

“This assessment can change on a dime in today’s uncertain world, but for now, the central bank is likely to remain on hold,” she said.

The Bank of Canada is set to make its next interest rate decision and release its updated monetary policy report on Jan. 22.

READ MORE: These are the best-paying jobs you can get without a university degree

The central bank has kept its key interest rate on hold at 1.75 per cent for more than a year even as many of its international peers, including the U.S. Federal Reserve, have moved to cut rates and loosen monetary policy in response to weakness in the global economy.

“Some aspects of the jobs data, such as wages, have been performing well, while others, such as hours, have not been.

“It seems we’ll have to wait for this month’s monetary policy report to see where the governor and his team land in interpreting these and other recent trends.”

Ontario added 25,100 jobs in December, boosted by gains in construction and public administration. Quebec added 21,100 jobs in the month, helped by gains in the accommodation and food services sector as well as manufacturing.