Climate change emerges as one of the top ballot-box issues among voters: Ipsos poll

Climate change has moved up as a key ballot-box issue for three in 10 Canadians, while health care remains a top issue, with 35 per cent of voters including it among their three most important election concerns, according to a new Ipsos poll.

Conducted exclusively for Global News between Oct. 4 and 7, among 1,502 Canadians, the poll found 29 per cent of those surveyed listed climate change as one of the top three issues that would determine how they vote on election day. 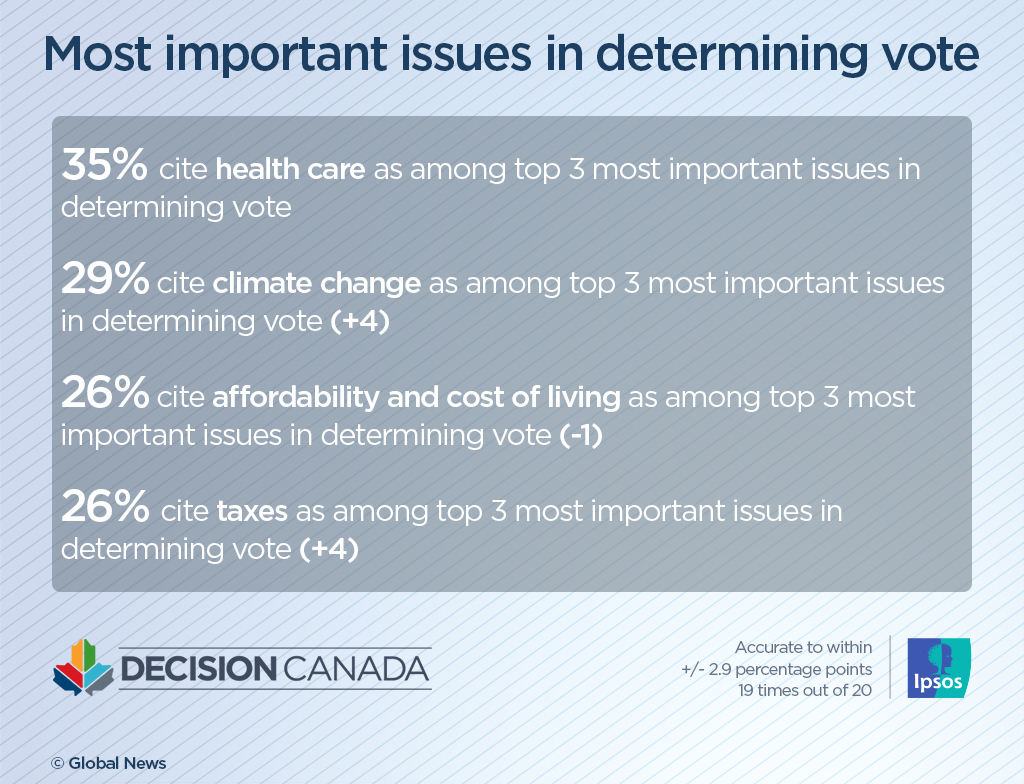 Ipsos vice-president Sean Simpson says that marks a change from last month, when 25 per cent of Canadians surveyed in a mid-September poll listed climate change as among their top vote-determining issues, after health care and affordability.

He says he has “never seen climate change quite so high” on Canadian voters’ agendas. Now, it seems to have become a “central point” of discussion in the campaign, as the second overall top election issue that Canadians surveyed in this Ipsos poll say will motivate them at the ballot box.

According to Ipsos, climate change had never breached the top three spots in its polls prior to September that asked Canadians about the most important issues that could determine their vote.

“Even six months ago, climate change wasn’t on the top five list of issues keeping Canadians up at night,” Simpson said.

The latest poll shows more Canadians (29 per cent) consider it among the three most important issues in determining their vote — a four-point gain since the beginning of the election campaign.

READ MORE: What is Extinction Rebellion and what does it want?

As the leaders’ debate has already demonstrated, climate change is linked with another top ballot-box issue — taxes. Simpson says that’s because of the way the major political parties have talked about it.

The Conservatives have emphasized that when they discuss climate change, “what we’re really talking about is taxation,” he said.

Climate change has dominated the headlines for the first half of this week. The televised federal leaders’ debate Monday night featured five topics, including the environment. Conservative Leader Andrew Scheer and Liberal Party Leader Justin Trudeau wound up exchanging barbs over the carbon tax — an issue closely linked with climate change.

And Extinction Rebellion protesters blocked bridges and held up road traffic at major cities across Canada on Monday as part of an international effort by climate activists to raise awareness about what they view as a “climate emergency.”

READ MORE: Health care is a top election issue, but many don’t want to pay more for it: Ipsos poll

Health care wasn’t on the agenda during Monday night’s leaders’ debate, but at least one party leader brought it up, Simpson said.

“What’s on the minds of Canadians influences what the leaders talk about,” he said. “I believe it was Elizabeth May who brought it up and I think the reason she did that is because health care remains the number one issue that Canadians say will determine who they’re going to vote for.”

May and NDP Leader Jagmeet Singh both made mention of their pharmacare and dental care plans during the debate.

According to the poll, affordability and cost of living (26 per cent) came in third as a ballot-box issue capable of moving votes, with taxes (26 per cent) a close fourth, followed by the economy (25 per cent).

The top four issues in last month’s poll were health care at 35 per cent, affordability and the cost of living at 27 per cent, climate change at 25 per cent and the economy at 24 per cent.

The poll also showed how top issues varied across age groups. For example, close to a quarter of millennials aged 18 to 34 (24 per cent) indicated education was an important issue, while 40 per cent of baby boomers aged 55 years or more cited health care as a top concern. 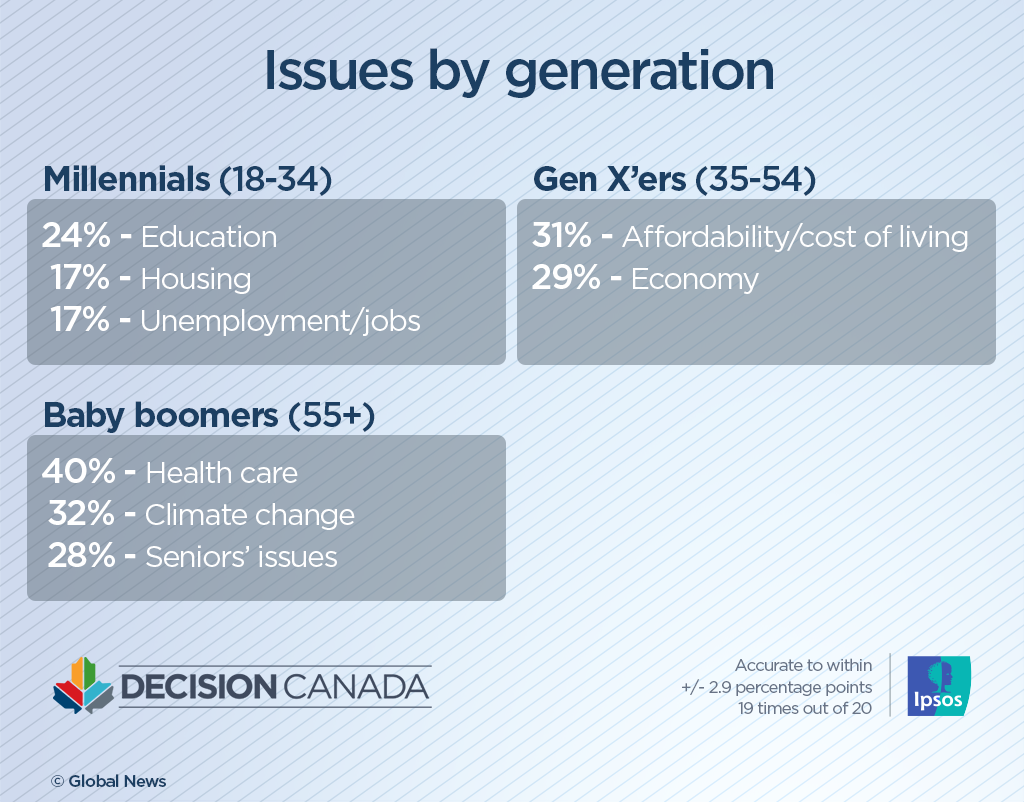 “But on the other end of the spectrum, when we look at older Canadians, perhaps not surprisingly, health care tends to be a more prominent issue for them,” he said.

More women than men indicated health care as an issue determining their vote — 38 per cent of women cited this as a top issue compared to 31 per cent of men. Close to a third of men (31 per cent) flagged the economy as a significant issue, compared to less than one in five women (19 per cent).

READ MORE: Canada’s undecided voters know what they want, but not who

Best party to deal with issues

Respondents were also asked which party they felt was best at dealing with a certain issue. The Liberals garnered the most support only on one file — 32 per cent viewed them as better than the other parties on the health care file, down by one point since the last issues poll. The Conservatives gained little ground here — 20 per cent saw them as the best party to deal with this issue, up by three points. 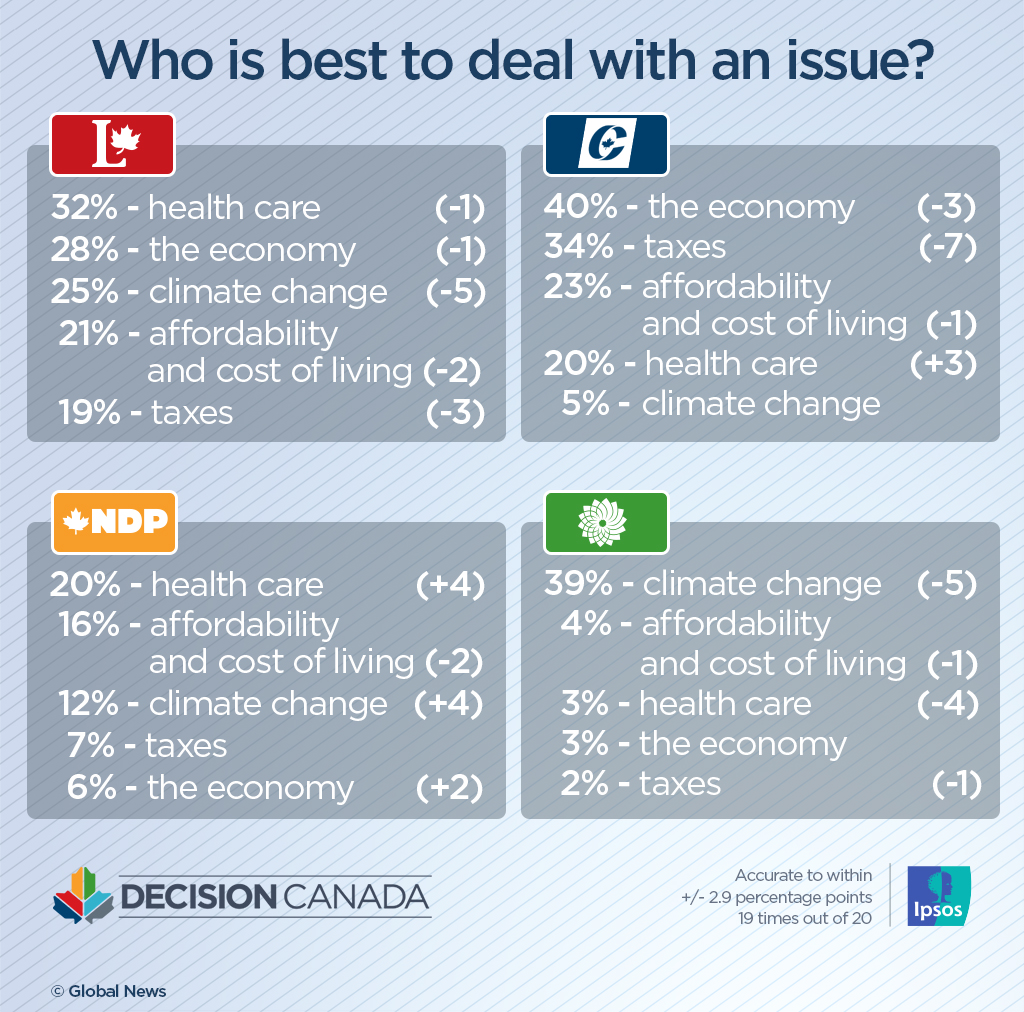 Almost two in five Canadians (39 per cent) felt the Greens were the best to deal with climate change, meaning the Liberals and Conservatives were left behind on this front.

“Even though climate change is the number two issue, the front runners aren’t the ones best perceived to be leading on it,” Simpson said. This doesn’t surprise him.

But the Greens have struggled to highlight policies beyond the environment.

“Canadians aren’t necessarily convinced that the Green Party has viable policy alternatives when it comes to economy or taxation, for example,” Simpson said.

The poll also found the strongest support the NDP could garner on a file was on health care — 20 per cent picked them as the best party for that issue.

Prevalence of issues by region

Some issues matter more in parts of Canada than others. For instance, climate change is a significant issue in B.C. (38 per cent) and in Quebec (39 per cent), while the economy as a ballot-box issue is most prevalent in Alberta (32 per cent) followed by deficits/debt (20 per cent) and energy and pipelines (20 per cent).

In Ontario, education is a top concern (19 per cent), while health care is high in importance for Atlantic Canada (45 per cent). 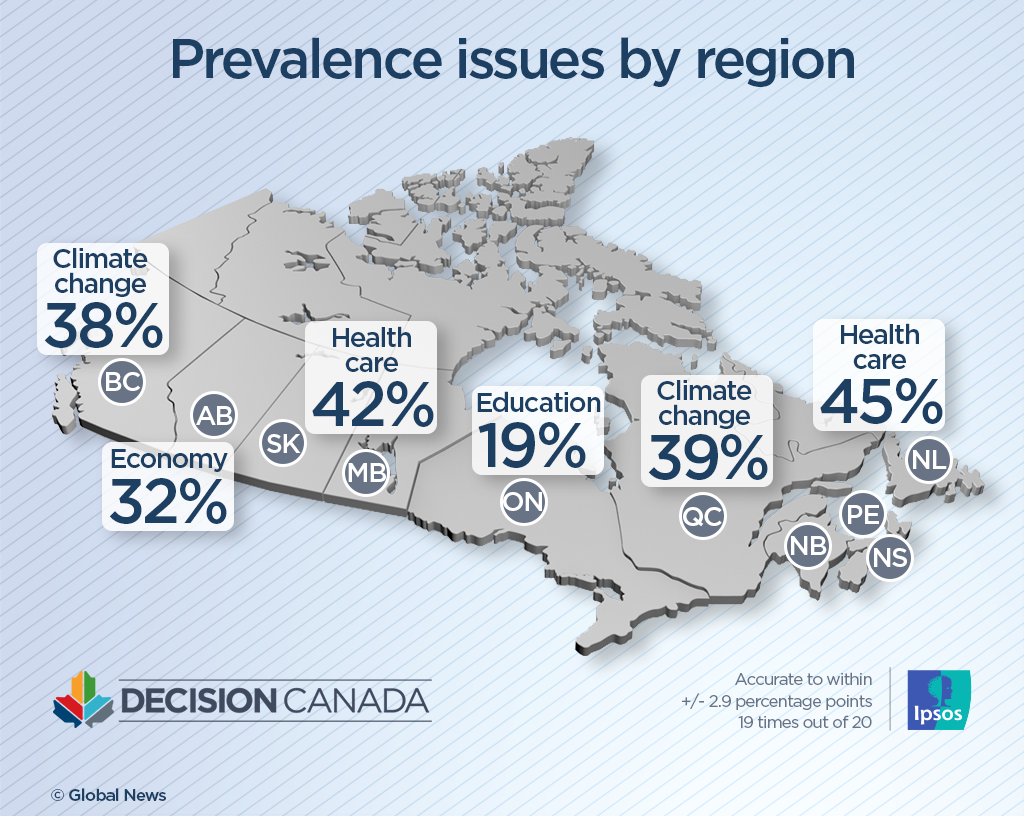 “Cynicism is a significant factor in the campaign and so is apathy,” Simpson said. There are some issues — such as affordability — where the Conservatives have a “very slight advantage” over the Liberals, he said.

“But a plurality of Canadians say they believe that no party is best equipped to make things more affordable for Canadians,” Simpson said.

He said there is “no clear frontrunner here in terms of the party who’s best to deliver on the top five priorities of Canadians.”

“So you know, it’s still anybody’s guess as to what’s actually going to happen on election day when things are so close.”

The full data for this poll can be found here.

Exclusive Global News Ipsos polls are protected by copyright. The information and/or data may only be rebroadcast or republished with full and proper credit and attribution to “Global News Ipsos.” This poll was conducted between October 4 and 7, 2019, with a sample of 1,502 Canadians from Ipsos’ online panel. The precision of Ipsos online polls is measured using a credibility interval. This poll is accurate to within +/ – 2.9 percentage points, 19 times out of 20, had all Canadian adults been polled.