The federal Liberals outspent the Conservatives on Facebook ads in September, data from the social media giant shows.

Facebook releases limited data about political advertisers on its platform. Advertisers can target people using detailed demographic criteria, including race and presumed ethnicity, but little of that complexity is visible in the public data.

The parties’ Facebook strategies give us an insight into the sex and age group of voters they appeal to —  and, in the Liberals’ case, what candidates they see as in need of protection. But the data raises deeper questions about what Facebook is teaching itself about what messages appeal to which Canadians, and in turn how that may shape our politics.

“Instinctually, it makes sense,” says Dean Tester, who runs a Conservative-leaning digital agency in Ottawa. “If you were to talk to your peers and ask them if they think attack ads are effective, men would be much more likely to respond to those ads.

“It makes sense to me, absolutely.”

If a Facebook ad was seen mostly by men, it could have been directed at both men and women and just appealed more to men. Or Facebook’s algorithm, after seeing that it appealed more to men, could have decided to show it mostly to men. But if it was seen only by men and no women at all — or only people in certain age groups — the ad buyer will have selected that.

Facebook’s ad library, which had its Canadian launch in June, gives some basic information about political ads.

The ad library only includes ads that have been identified as political by their creator or by Facebook. Ads that haven’t been flagged in that way won’t appear in the data.

Since June, the Liberals have tried at least 7,000 Facebook ads, which allows a complex trial-and-error process of offering different messages to different markets and seeing what works, Tester says.

“It tells me the Liberals are a little more serious about digital advertising as an effective tool right now. That could change as we get closer to election day,” he adds.

“But right now, it seems like the Liberals are doing much more of it and likely doing it better.”

People’s Party of Canada ads seemed disproportionately seen by men, though it’s not clear if that’s organic preference, Facebook’s algorithm, or some combination of both. 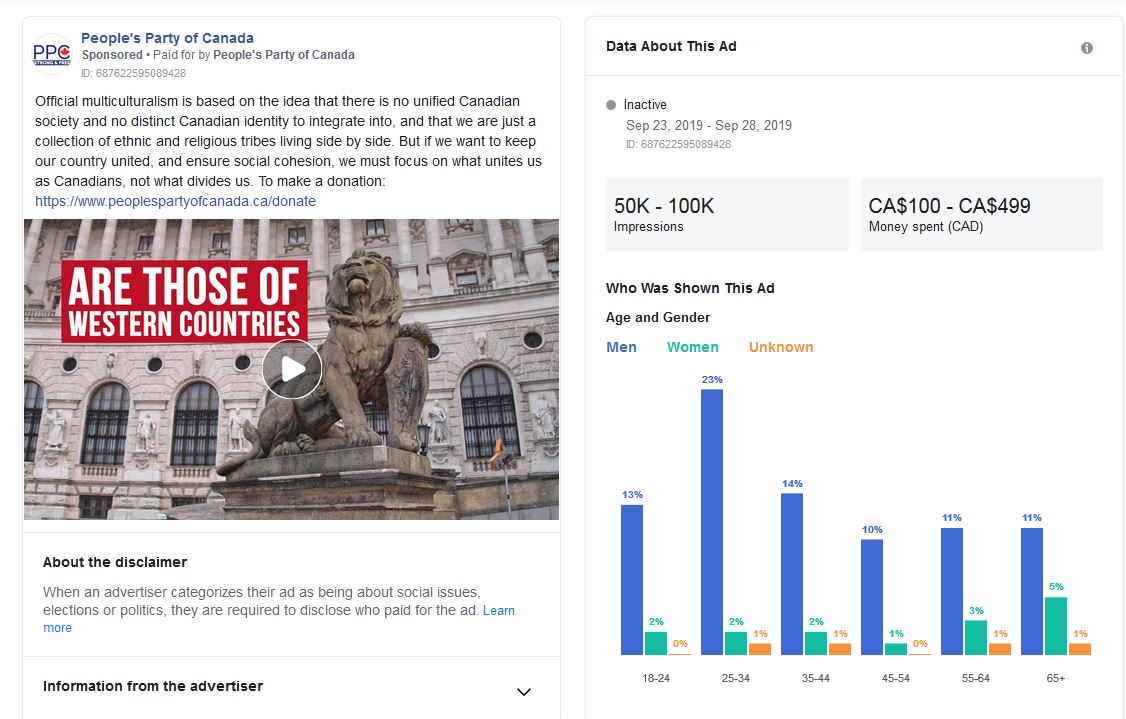 “I can tell you that Facebook is definitely teaching itself,” say Rob Smith, a marketing professor at Tilburg University in the Netherlands.

Facebook’s ad algorithms work on ‘machine learning,’ in which the platform’s tools figure out which kinds of users are open to what kind of content, and then efficiently show that content to those users.

Applied to an election, the ads start by being shaped by political culture and ends by shaping it, Smith explains. If men show more interest in PPC ads, more men will be shown the ads, potentially strengthening the pattern that already exists.

“One of the major ways in which Facebook is contributing to cultural change is creating these ideological bubbles,” Smith says. “I’m going to unfriend people who have different political opinions as me, but I’m also going to continue to receive ads that reinforce my political opinions.”

At $4,220, the federal Green Party’s Facebook campaign has a much smaller budget than its rivals.

One Green ad seems to be targeted only at women in British Columbia. It’s the only ad we could find that was totally directed at either women or men. 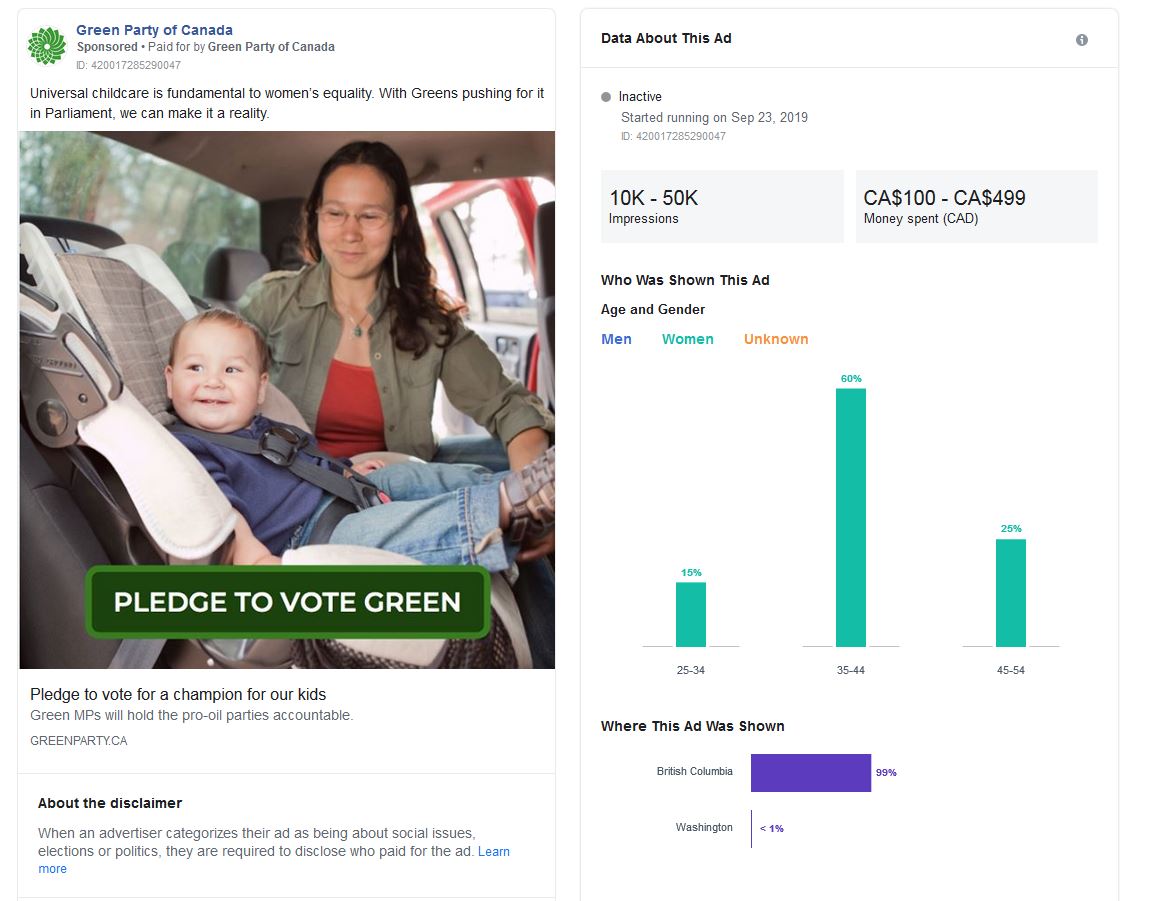 Some election-related ads are tailored to specific ridings.

Eight Liberal candidates were spending more than $4,500 locally on Facebook ads. Facebook ads can be roughly targeted to a location, so it’s possible to target ads more or less to a particular riding.

Most of the candidates who spent more than $4,500 on local Facebook ads are incumbents, but two are not. All seem to be in winnable but challenging ridings for the federal Liberals, and five are in the West.

Only the Liberals seem to support specific candidates with ads, apart from the ads bought for Montreal New Democrat Alexandre Boulerice ($6,616).

“You have a finite pool of resources,” Tester says. “Why buy a TV ad and hope people in Calgary see it when you can directly target people in Calgary with the ads you want, targeting local issues, talking about local members? I think that’s great for the parties to do — it’s the right strategy.

“You don’t have to be a rocket scientist to know that the Conservatives want to get their seat in Calgary back.”

“If I’m a politician on the right, I target people who are maybe moderately right and try to move them farther to the right. I try to get them fired up to go vote.”

“That logic doesn’t really apply to the centrist guys. You might really turn off people by attacking people on either side.”

Third-party advertisers cluster on the left and right, with the conservative ones appearing to have deeper pockets, at least for now.

On the right, the two biggest are Canada Proud and Proud to be Canadian, with about $80,000 spent in September. Both pages’ ads are seen largely by men. 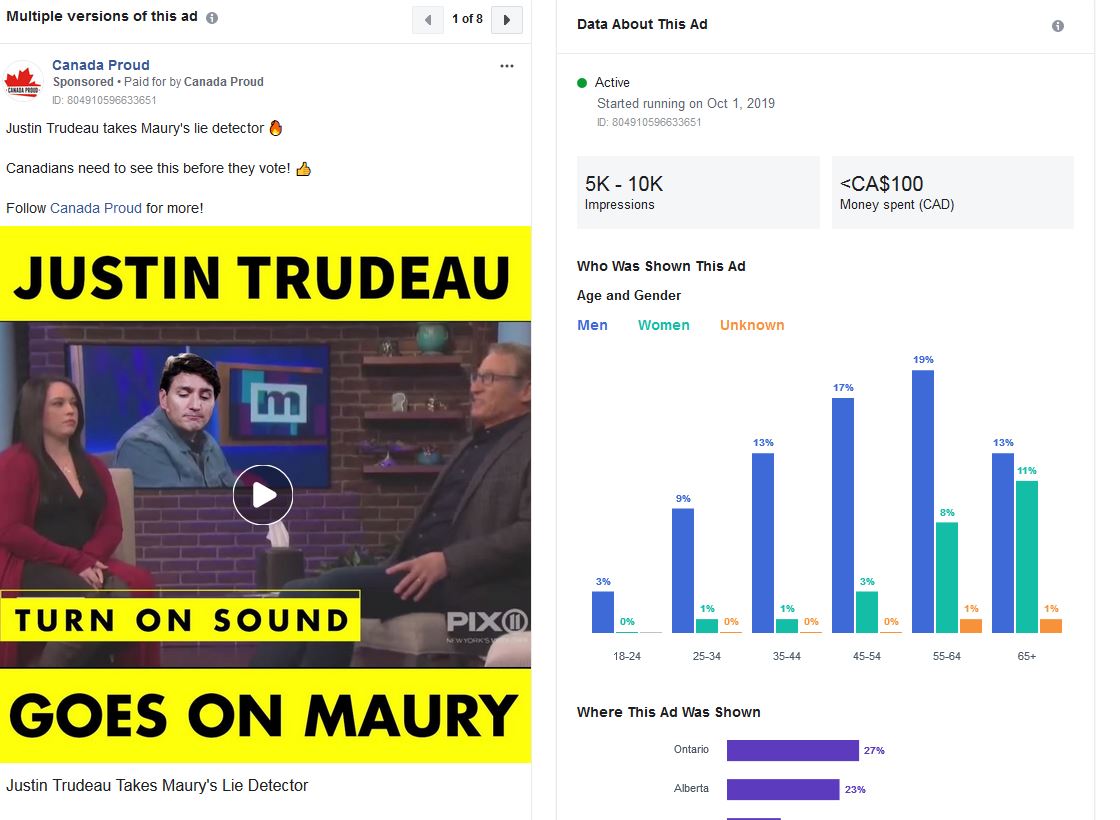 How much effect do pages like Canada Proud have on an election? Tester says it isn’t clear.

“It’s one of those things where they like to take credit and the people who like to villainize them like to give them credit, but it’s very hard to actually measure what impact they have.”

It may be an exercise in motivating the already converted rather than attracting new supporters, he says.

“What they do is that they get voters fired up. They get fired up to get out to vote, donate — I think that’s helpful for the causes they support,” Tester says.

On a tier below that are third parties Ontario Watch and WestWatch Canada, both backed by Canada Growth Council Inc., and Québec Fier, a Quebec affiliate of Alberta Proud. Pages at this level spent $5,000 to $7,000 in September.

WATCH: The rising rhetoric around refugees is fuelling many falsehoods about whether these new arrivals pose a threat

Ontario Watch has targeted several Ontario Liberals with negative ads, but the most successful ad we could find, ‘Firing strong women/Trudeau must go,’ was a general attack on Liberal Leader Justin Trudeau. Seemingly directed entirely at women in Ontario, it got 100,000 to 200,000 impressions.

The United Steelworkers ($27,515) are explicitly backing the NDP in their ads. A set of negative ads about Trudeau seem to have been targeted at young men.

With their messages sharpened by Facebook, parties can use the lessons learned to direct more old-fashioned ads, Tester says.

“They’re going to take all those issues out, micro-target them, see what people care about and guess what’s going to be on the literature on election day that they’re handing out? It’s going to be the things that perform best.”

Smith says that if he had the power to get rid of Facebook-based political advertising completely, he would.

“I would definitely say it does more harm than good, extremism being a primary form of the harm.”