Canada’s inflation slows to 1.9% in August as gas prices drop

Canada’s annual inflation rate slowed slightly to 1.9 per cent in August under the weight of declining gasoline prices.

Inflation was firm enough to stick close to the Bank of Canada’s ideal two per cent target — and August was the sixth straight month that price growth was 1.9 per cent or higher. The price picture, on its own, did not put pressure on the inflation-targeting Bank of Canada to adjust interest rates. 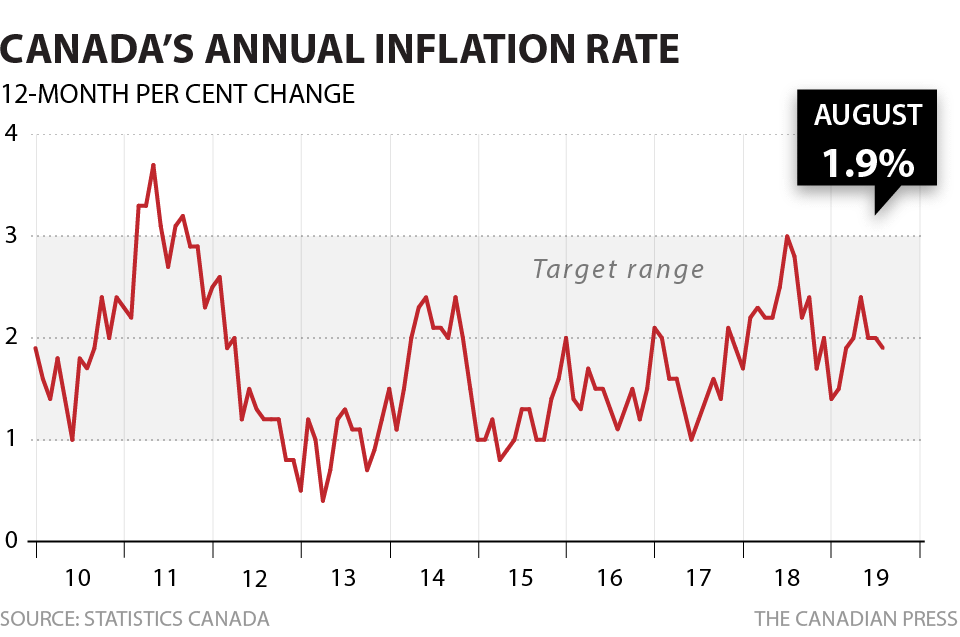 Excluding pump prices, the consumer price index was up 2.4 per cent from a year ago, Statistics Canada said Wednesday in a new report. Gas prices fell 10.2 per cent last month, which followed a decrease of 6.9 per cent in July.

WATCH: What steady interest rates mean for your investments

On a month-to-month basis, the price of pork declined 2.7 per cent at a time when Canadian pork products are facing tougher restrictions in the key Chinese market. Consumers also paid 6.5 per cent less for fresh vegetables — the largest decline in five years — as temporary price increases due to poor weather in growing regions eased off.

The upward pressure on consumer prices, year-over-year, was led by higher costs for airline tickets, mortgage interest and auto insurance.

READ MORE: Worsening of trade war would deliver a ‘complex shock’ to the economy, Bank of Canada says

The cost of air travel climbed 10.3 per cent in August. The increase was largely related to the impact of the grounding of Boeing 737 Max jets during the busy summer travel season, the report said.

Natural gas prices rose to 5.8 per cent last month, up from a 3.2 per cent increase in July.

The average of Canada’s three gauges for core inflation, which are considered better measures of underlying price pressures by excluding volatile items like gas, hit the central bank’s target at two per cent. The reading was 2.03 per cent in July.

Canada’s domestic economy has been resilient even as trade wars inject significant uncertainty into the slowing global economy. Many forecasters have been expecting the Bank of Canada to cut its overnight lending rate before the end of the year and perhaps as early as its Oct. 30 policy announcement.

Economists on average had expected an inflation reading of 2.0 per cent for August, according to financial markets data firm Refinitiv.