A man wanted on a Canada-wide warrant was fatally shot during a confrontation with police in the city’s south end on Tuesday night.

Ontario’s Special Investigations Unit is probing the shooting. In its initial investigation, the SIU says around 8:30 p.m., police officers began to follow a vehicle of interest on Highway 115. The SIU says the Mustang was believed to have been involved in alleged crimes in the Barrie area. The Peterborough Police Service said the vehicle had been reported stolen in the village of Millbrook, just south of the city.

Eventually the pursuit saw the Mustang collide with another civilian vehicle in the area of The Parkway and Sir Sandford Fleming Drive in Peterborough, according to the SIU.

The incident then saw Peterborough Police Service and Peterborough County OPP officers involved in an armed standoff with occupants in the vehicle.

WATCH: The SIU is investigating after a shooting involving police in Peterborough on Tuesday night.

The SIU says when officers approached the vehicle, “an interaction” ensued between them and the driver.

SIU investigators say around 9:40 p.m. one officer discharged his firearm and struck the individual.

The driver was transported to hospital where he was pronounced dead, the SIU said.

He has been identified as Billy Shea, 27, of no fixed address.  The SIU says Shea’s family gave consent to release his name on Wednesday.

Const. Steve Sermet of the OPP’s repeat offender parole enforcement (ROPE) squad, confirmed with Global News Peterborough that Shea was the subject of a Canada-wide warrant.

Shea, a federal parolee, allegedly robbed a convenience store at gunpoint in West Hamilton on July 16. He was facing three charges of robbery with a firearm, disguise with intent and unlawfully at large. According to ROPE, Shea allegedly breached his statutory release after serving a five-year sentence for multiple counts of robbery and vehicle theft.

The SIU says six investigators and three forensic investigators have been assigned.  At this time, one subject officer from the Peterborough Police Service has been designated, the SIU said.

WATCH: SIU at the scene on Wednesday morning

In a separate release Wednesday morning, Peterborough Police Service provided a similar description of the events.

“During interaction with police a male subject in the suspect vehicle suffered a serious injury,” Peterborough Police Service stated. “The male subject was later pronounced deceased in hospital.”

However, Peterborough police say no further comment would be made since the SIU has invoked its mandate. The SIU investigates circumstances involving police and civilians that have resulted in serious injury, injury, death or allegations of sexual assault.

Around 10:15 a.m.: The Parkway, Sir Sandford Fleming Drive and Highway 115 south-bound ramp re-opened. The 115 northbound ramp to The Parkway remains closed to traffic.

At 1 p.m. the entire area was reopened to traffic. 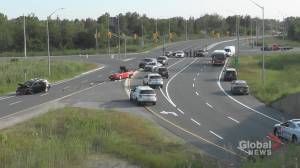 The SIU are investigating on Wednesday morning.