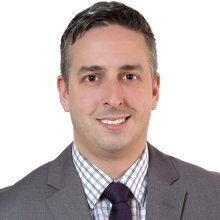 Mark Giunta is a videographer and backup news & sports anchor at CHEX TV.

Mark is a first generation Canadian, born to French and Italian parents. He was born in East York, Ontario and spent his childhood growing up in both Ontario and Quebec.

Mark has two computer engineering diplomas from Fleming College in Peterborough as well as a broadcast journalism diploma from Loyalist College in Belleville. His journalism career started in radio news in Belleville in 2007 before a move to Cobourg in 2008.

Mark made the transition to television news at CHEX in 2011. While at CHEX he has covered many big stories including the 2013 flood in Minden and the trial of former MP Dean Del Mastro on election overspending charges.

Mark is a big hockey, baseball and football fan. When Mark isn’t reporting or anchoring he’s enjoying life in the country with his girlfriend and their two young children.