A 37-year-old Richmond, B.C. woman was among the six people killed in the Alaska floatplane crash Monday, Alaskan state troopers have confirmed.

The bodies recovered belonged to a Canadian and an Australian. Dykens said the other four victims were all American.

Breaking: Alaska State Troopers releasing the names of the dead from the float plane crash in Ketchikan. One Canadian is being identified as Elsa Wilk. A 37-year-old from Richmond BC.

On Tuesday night, Alaska state troopers released the names of the victims, including of 37-year-old Richmond, B.C. resident Elsa Wilk.

The other victims were pilot Randy Sullivan, 46, from Ketchikan, Simon Bodie, 56, from Australia and  Cassandra Webb, 62, Ryan Wilk, 39, and Louis Botha, 46, all from the continental U.S.

“Our thoughts and sympathies are with the family and loved ones of the Canadian citizen who died in Alaska,” said Global Affairs spokesperson Guillaume Bérubé earlier on Tuesday.

“Canadian consular officials in Seattle are in contact with local authorities to gather additional information and stand ready to provide consular assistance as required.”

The six people were killed after two floatplanes carrying cruise ship tourists collided near the southeast Alaska town of Ketchikan, the U.S. Coast Guard said. Ten other passengers were injured.

Cmdr. Michael Kahle with the U.S. Coast Guard said several of the 10 passengers who were rescued on Monday had managed to swim to shore.

Kahle said a USCG cutter was on scene, along with a small boat from the coast guard station. Members of the Ketchikan Volunteer Rescue Squad and state troopers were scouring the shore on Tuesday.

All 14 passengers on both sightseeing planes were from the cruise ship Royal Princess, on a seven-day trip from Vancouver to Anchorage and operated by Princess Cruises, cruise line spokesperson Negin Kamali told Global News in an email.

The ship left Vancouver on May 11 and is scheduled to arrive in Anchorage on Saturday.

Pilot Randy Sullivan, identified as the owner of Mountain Air Services on the company’s website, was among the dead on the smaller plane.

Mountain Air’s website describes him as a Ketchikan local with 14 years of flying experience. The Federal Aviation Administration (FAA) confirms Mountain Air was the second operator involved in the crash.

A tearful vigil for the victims of the crash was held in Ketchikan on Tuesday.

Father Pat Travers, with Ketchikan’s Holy Name Catholic Church said it was important for the community to show support for those affected, near and far.

“Because we are a small community that is very isolated and has many people involved in the visitor industry, it was important we thought to pray certainly for some of our local people who were killed or injured, and also for our visitors so we might be able to express our solidarity with them.”

The crash site, at Coon Cove about 480 km south of Alaska‘s capital, Juneau, lies near a tourist lodge that runs excursions to the nearby Misty Fjords National Monument. 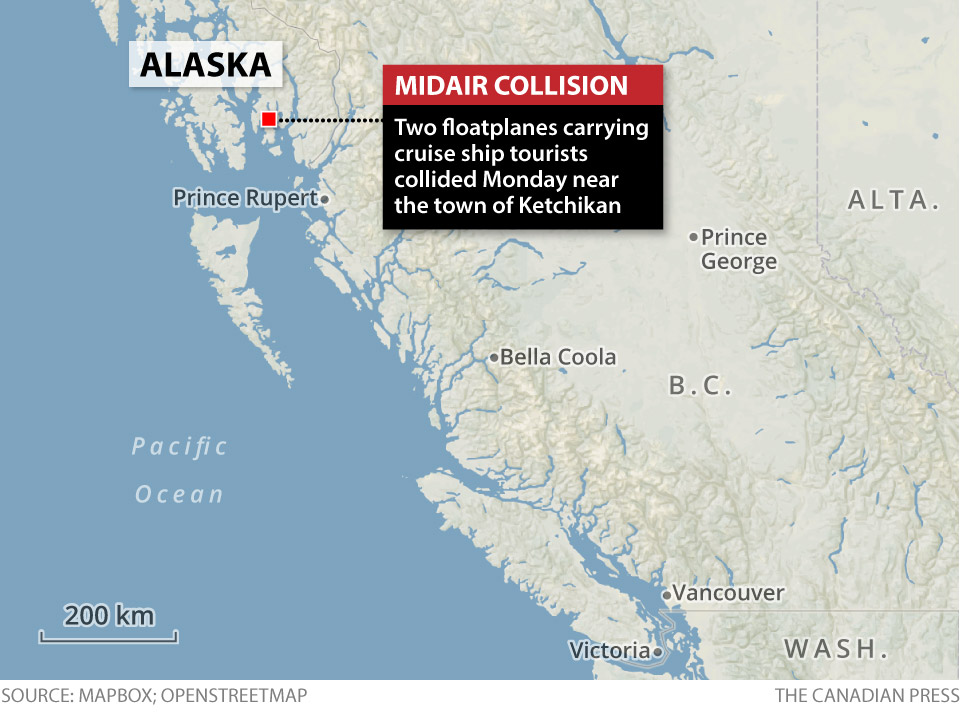 One of the aircraft was a de Havilland DHC-2 Beaver with five people aboard, and the other a de Havilland Otter DHC-3 carrying 11, Federal Aviation Administration spokesman Allen Kenitzer said.

The Otter was operated by Taquan Air, which says it has suspended all flights pending an investigation by regulators.

A team of U.S. federal accident investigators with the National Transportation Safety Board (NTSB) arrived in Ketchikan on Tuesday.

NTSB board member Jennifer Homendy said crews will recover wreckage from the crash site on Wednesday.

She said neither plane had, or was required to have, a cockpit voice recorder or flight recorder. However she said the preliminary investigation suggests both planes were inbound to Ketchikan when they collided at an altitude of between 975 and 1,005 metres.

Homendy said investigators would be on site for up to a week, and will be looking at a variety of issues including terrain, weather conditions, the oversight of operators.

Floatplanes have pontoons mounted under the fuselage so they can land on water.

— With files from Reuters and the Associated Press