The devastation by fire of the Notre Dame Cathedral in Paris is a major disaster for one of the world’s most architecturally significant French Gothic structures, experts say.

“Everything is burning. Nothing will remain from the frame,” Notre Dame spokesperson Andre Finot told the French media Monday evening, after the cathedral’s soaring spire collapsed in flames.

The cathedral is a tourist magnet, an iconic Parisian landmark, a breathtaking religious site and a beloved structure among art and architecture lovers, many of whom lamented the fire on Monday.

Built over two centuries starting in 1163, Notre Dame has been an ongoing project ever since, with generation after generation of workers inventing new ways to save it from its own age.

READ MORE: Here are the 'invaluable' treasures that were inside Notre Dame

The building was massively tall compared to other churches of its era, yet it was designed to look light and open, according to Michael T. Davis, chair of architectural studies and professor of art history at Mount Holyoke College in Massachusetts.

“It’s been a very experimental structure,” Davis told Global News. “It was the tallest building in Western Europe (in the 12th Century) and it really marks a bold leap upwards in the scale of Gothic architecture.”

The interior of the church was an accomplishment in itself, because the roof was 35 metres (125 feet) high at a time when church interiors maxed out at 24 metres (80 feet), according to Malcolm Thurlby, a Gothic architecture expert and professor of art history at York University in Toronto.

“To go over 100 feet in height is absolutely incredible,” he said.

Notre Dame was also among the first buildings to feature flying buttresses — a series of half-arches that curve up from flat parts of the structure to support walls on the next level.

“It was among the first [buildings] to really take advantage of the potential of flying buttresses to lighten the structure,” he said.
Story continues below advertisement

Thurlby says the existing arches were all built during the French Restoration of the 19th century, when the French were embracing the past and trying to return many of The country’s old structures to their former glory.

“As far as we can tell, they repeat the 12th century form very accurately,” Thurlby said of the buttresses.

WATCH: The glorious and tragic history of the Notre Dame Cathedral

The Restoration kicked off in part thanks to Victor Hugo’s landmark 1831 novel The Hunchback of Notre Dame, which features the cathedral itself as a sort of “character,” Thurlby said.

READ MORE: The glorious (and tragic) history of Notre Dame Cathedral from de Sully to Disney

The book laments the broken-down state of the church at the time, after it was pillaged during the French Revolution four decades earlier.

Story continues below advertisement
“Assuredly the Cathedral of Notre Dame at Paris is, to this day, a majestic and sublime edifice,” Hugo wrote. “But noble as it has remained while growing old, one cannot but regret, cannot but feel indignant at the innumerable degradations and mutilations inflicted on the venerable pile, both by the action of time and the hand of man.” 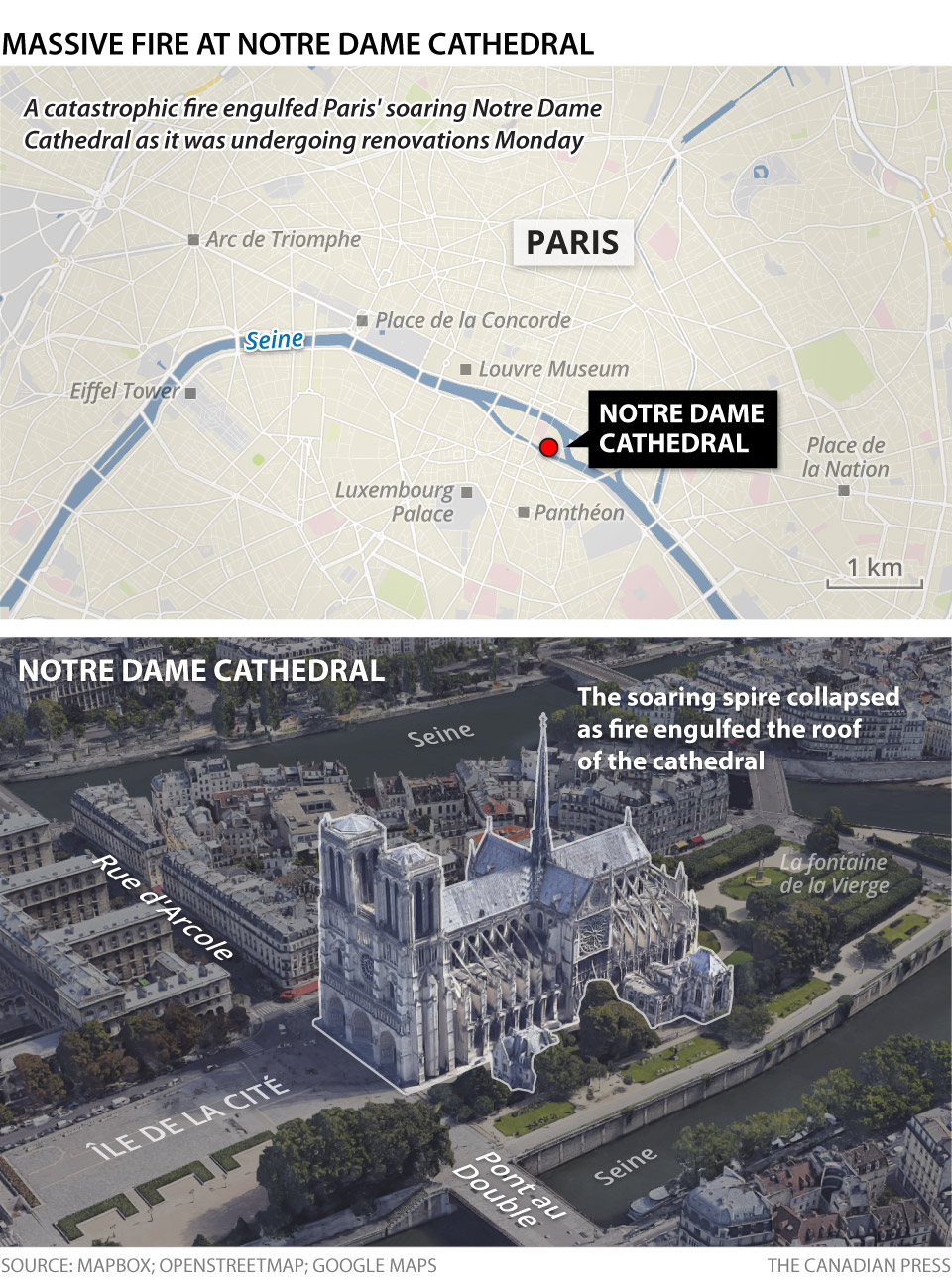 The church is also renowned for its massive bells, which received an upgrade for the church’s 850th anniversary in 2013.

WATCH BELOW: Future of Notre Dame up in the air after fire

Notre Dame is always in a state of construction, Davis said.

“It’s to combat the effects of weather and wind and just the kind of slow erosion and degradation of stone,” he said.

A statue is removed from the spire of Notre Dame cathedral by a crane before restoration work, in Paris, France, April 11, 2019.

Davis says many Medieval churches burned down in the same way, with the spire catching fire and crumbling into the centre of the church, where the rubble set the interior aflame.

He says Paris likely hasn’t seen this much damage to a major building since the World Wars.

Both experts say rebuilding the church will be difficult, because fire can ruin the structural integrity of the stone.

WATCH BELOW: Fire rips through Notre Dame in Paris

“They have an awful lot of information about it,” Thurlby said.

However, “it will be rebuilt,” he added, though probably with more steel and modern techniques to protect it from future disasters.

Davis says the church is too iconic not to restore it.

“There are a lot of Notre Dame cathedrals,” he said. “But in some ways, this was the Notre Dame. This is one of the most famous expressions of Gothic architecture, in France and in the world.”