Kingston has a serious shortage of family doctors, according to many politicians. On Tuesday, NDP Leader Andrea Horwath hosted a roundtable with several residents in Kingston to discuss the issue of the doctors shortage in the city.

At one point during the discussion, Horwath said, “There are some estimates that are as high as 33,000 people in the Kingston area who do not have access to a primary care physician or family doctor and that’s just unacceptable.”

But that figure didn’t sit well with former MPP of Kingston & the Islands, Sophie Kiwala.

“When I saw that figure that 33,000 Kingstonians were without a doctor, I was concerned that, that figure was incorrect because it was much lower than that when I was the MPP,” says Kiwala.

Kiwala served as a Liberal MPP from 2014 until June of this year.

Kiwala also says during her time as MPP, “I believe we were looking at about 1,200 or 1,500 that were without a doctor, so that’s a huge difference and it was important for me to correct the difference.”

So she took to social media.

In a Facebook post, Kiwala states that according to a study by the health care connect, a government organization, there are over 34,000 residents in the entire southeast region of Ontario without a family doctor, not just in the city of Kingston. 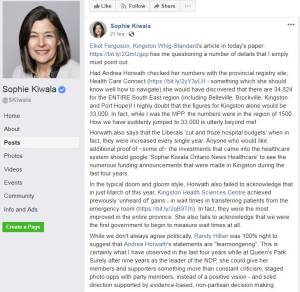 “It’s important that you say where you got your numbers from and it’s important if somebody gives you those numbers that you check it,” says Kiwala.

Global News reached out to NDP MPP of Kingston & the Islands, Ian Arthur, for clarification.

“Andrea came to Kingston to listen to community members and their experiences and that’s exactly what she did,” said Arthur.

Global News asked Arthur where the NDP got their facts from. He said they grabbed their figures from KEDCO, Kingston Economic Development Corporation, that released a similar number which was used for a city council motion.

In September of this year, city council had passed a motion to call on the province to reclassify Kingston as a “high needs” area for family physicians.

READ MORE: Get patients out of the hospital hallways, says Ontario hospital union

According to both sides, the bigger issue is that Kingston has a shortage of doctors.

If the city gets reclassified by the province as a “high needs” city for family physicians, then Kingston could receive provincial incentives to attract new family doctors to the area.