Earlier this summer — a summer that has seen Toronto wracked by gun violence — a report came out that suggested lawful Canadian gun owners were to blame for at least some of the violence. The article was originally published by the Canadian Press, and was widely republished elsewhere, including at the CBC, the National Post, a dozen local newspapers, CTV News, and, yes, here at Global News. Since then, it has been widely cited in other news stories covering the issue, including in The Toronto Star and The Globe and Mail. The report was everywhere.

Here’s the problem. Newly released stats show clearly that it was wrong.

The article was based around an interview with a Toronto Police Services detective, Rob Di Danieli. Det. Di Danieli told the Canadian Press that Canadians who were lawfully licensed to purchase and possess firearms were increasingly a public safety issue. “They go get their licence for the purpose of becoming a firearms trafficker,” Di Danieli told the CP. “A lot of people are so ready to blame the big bad Americans, but we had our own little problem here.”

The CP article hangs on this revelation from the detective. It notes, in various places, “The number of guns obtained legally in Canada but are then sold to people who use them for criminal purposes has surged dramatically in recent years compared to firearms smuggled from the United States, Toronto police say,” and, “In recent years [investigators say they] have noticed a stark shift in where guns used to commit crimes are coming from,” and, “Legal Canadian gun owners are selling their weapons illegally, Di Danieli said, noting that police have seen more than 40 such cases in recent years.”

This article absolutely informed the debate unfolding in Canada (and specifically in Toronto) right now. I can speak to that directly: while discussing the issue of handguns in Canada these last few weeks, on my radio program, online and in columns, the article has been repeatedly sent to me as a form of rebuttal: “See, Gurney, see! Lawful Canadian gun owners ARE the problem! Read this article and weep!”

But the article didn’t cite any statistics to back up its main assertion: that criminals in Toronto are being provided firearms by licenced owners in increasing — “surging” — numbers.

At the time the CP story first ran, there were no publicly available stats to support (or contradict) what di Danieli had told them. But now, those numbers are publicly available, thanks to Dennis R. Young, an Alberta-based researcher who filed a Freedom of Information request with the Toronto police and published their reply on his website. And these stats tell a very different story.

In short, there is no surge in crime guns that can be traced back to licensed Canadian gun owners. None. It’s just not there. The Toronto Police Service’s own statistics show no such surge. For instance, see this chart below. It tracks the number of “crime guns” that can be sourced either to Canada or the United States. The CP article asserts that there’s been a surge of Canadian-sourced guns since 2012. But these numbers go back as far as 2007. Look for yourself. Where’s the surge?

Below: Data shows the number of ‘crime guns’ seized by Toronto police based that can be traced back to Canada and the U.S.

There’s no surge in guns traced back to Canada. There’s an ebb and flow across the years, but no “surge” post-2012. In fact, if you look carefully, you’ll see that while the number of guns sourced from Canada bounces up and down a bit, the overall trend is down.

But let’s be even more specific. The Toronto Police definition of a “domestically sourced” crime gun is broader than the definition of a crime gun that’s specifically traced back to a lawfully licensed gun owner — the people discussed in the CP article. But the number of guns traced directly back to licensed individuals is also available in the Toronto Police stats. Please see below for that comparison: crime guns traced back to the U.S. vs. traced directly back to lawful Canadian owners.

BELOW: Data comparing the number of crime guns seized by Toronto police that can be traced back to the U.S. or to lawful Canadian gun owners. 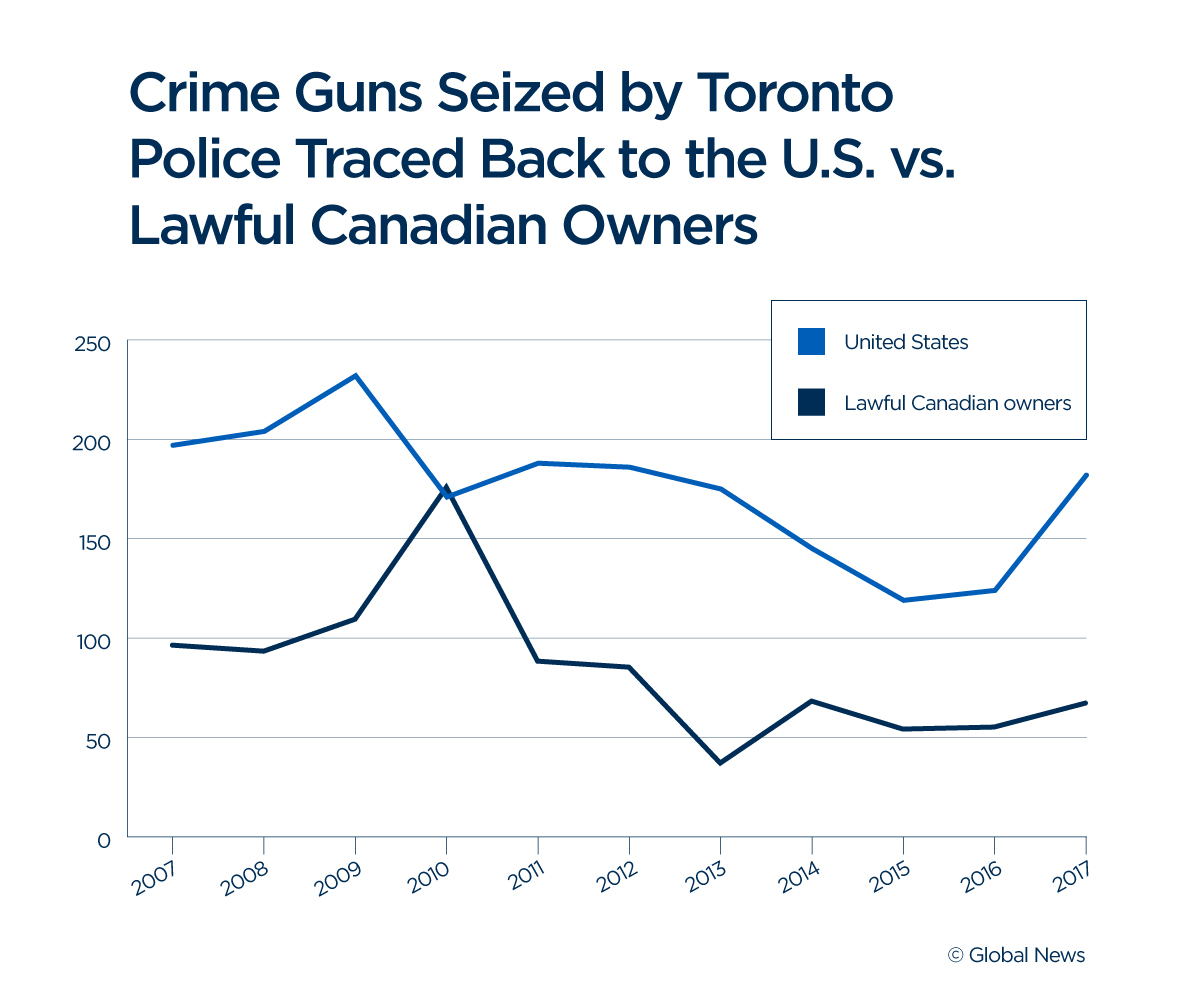 Once again, you’ll see some variation year by year, but the number of Toronto crime guns traced directly back to licensed Canadian owners is much fewer than those traced back to the U.S. — and is also trending down over time. There is no “surge” post-2012. The number actually dropped sharply in 2013, and then returned to a more typical level — which is still well down from 10 years ago. In fact, each of the last five years would rank in the lowest five years for Toronto police tracing guns back to lawfully licensed Canadians. All of them are below the 2012 figure, which itself was below 2011’s.

Indeed, even if we use the more expansive definition of “domestically sourced,” every single year post-2012 shows fewer crime guns seized in Toronto than in 2012 itself.

There are broader issues here, as well. The vast majority of guns are never traced back to any particular origin. Take 2017, for instance. Of the more than 1,700 firearms seized by Toronto police that year, only 330 guns could be linked to either Canada or the United States. It’s been even more stark in other years, as the chart below shows:

ABOVE: The total number of firearms seized by Toronto police is much higher than the number of those guns that can be traced back to either Canada or the U.S.

See those lines smooshed way down there on the bottom? Those are the guns that are actually traced to Canada or the U.S. We’re arguing over rounding errors. But even so, you’ll note no radical shifts or surges anywhere, let alone after 2012.

And there’s another revealing insight in the numbers released by the Toronto police: roughly half of the crime guns seized by Toronto police in 2017 were classified under Canadian law as “prohibited,” meaning they are virtually banned and only rarely possessed by any Canadian civilian (the only real exceptions are Canadians who owned said firearms before the current gun control classification system was introduced in the 1990s). Any kind of further crackdown on gun ownership in Canada would have extraordinarily limited impact on these guns, which, again, were half the crime guns seized in Toronto in 2017 (I haven’t crunched the numbers for each year going back to 2007, but prohibited guns are a major portion of the total in every year). These guns are effectively banned already. Is that not evidence that the debate about banning guns is missing the mark?

Both the Canadian Press and the Toronto Police were contacted about these matters before this column ran. In an email, an editor at the Canadian Press said they were looking into the matter but had no further comment at that time. An officer with the communications department of the Toronto Police said that my request to speak with Det. di Danieli would be passed along; but as of 24 hours later, there has been no reply beyond confirming receipt of my messages. This is unfortunate. Without comment, I can’t begin to explain how the public narrative that was established was so wildly off what the statistics actually show. I choose not to speculate. But an explanation would certainly come in handy. If any arrives, I will update you.

In the meantime, the debate will continue, of course. There’s no doubt about that. But it has to be an informed debate. I’ve said it before, and I have a grim feeling I’ll say it again, but gun control is an important public policy issue, and Canadians were woefully ignorant of it, in large part because these issues are not effectively reported on. This CP article’s central claim has been at the centre of our gun control debate this summer, and has been cited as a secondary source … I don’t even know how many times.

But the article’s central claim, of a surge in domestic crime guns, is bad. Inaccurate. Wrong. And that bad, inaccurate and wrong information is now at the core of an important and contentious public policy debate.

Politicians, including the Prime Minister and Toronto mayor John Tory, who once strongly opposed a ban on handguns, are now either considering or actively calling for one. This would be a major change to the Criminal Code involving potentially billions of dollars in private property. It is not an exaggeration to say the CP report is a key part of this debate.

Do our political leaders know they’re reacting to a story with bad information? Perhaps the more depressing question is whether they’d care if they did.

Clarification: Prohibited-class firearms can also include firearms that have been illegally modified.