A walk across a pasture in southern Alberta is an obvious indicator of the dry conditions blanketing the Prairies.

“This is probably one of the drier years since the eighties,” Kelly Hall said.

Hall and her husband Glen are cattle producers near Stavely, Alta. They said it’s been many years since their area has witnessed conditions like those of summer 2018.

Hall said the lengthy winter plagued the heart of cattle country with high calf losses, and the hot days of summer have left a mark on the land, as well as those who operate on it.

“After a really tough calving season for many producers, followed by dryness like we are in right now…It’s going to be hard,” she added.

Yields on hay fields have decreased from previous years. The Halls said they have only received three inches of rain since June, which is well below average for the area.

The lack of feed isn’t just an issue in Alberta. The government of Canada drought map shows parts of British Columbia, Alberta, Saskatchewan and Manitoba are all experiencing significant drought conditions. 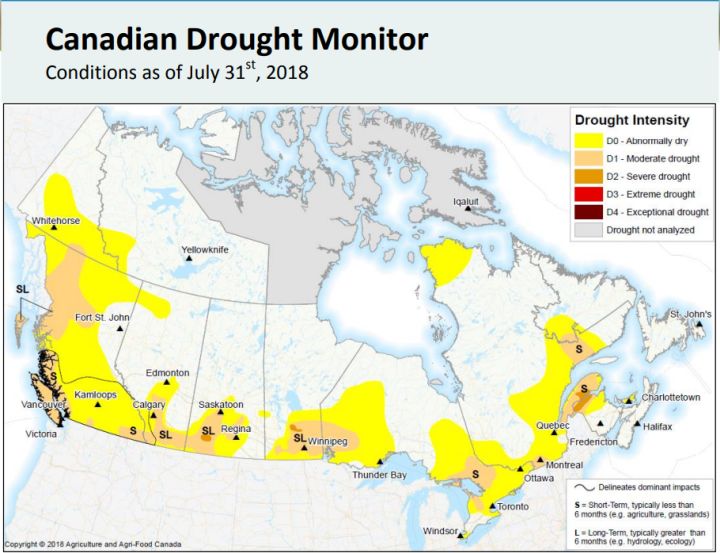 “I think the one thing that is that is the same all across Western Canada is the lack of hay,” said Bob Balog with Balog Auction. “I think regardless of what area you go to, hay bales are really hard to find.”

“We are in a very bad drought. We were there a year ago and we are there again.”

On his tour, he noted parts of northern and central Alberta and Saskatchewan saw significantly more moisture than the southern portions. Crops and pastures are doing better in those regions, but the hay crops are also struggling.

He added Canada isn’t the only part of the world dealing with less than ideal conditions.

“We are seeing in the southern United States–like Texas, Oklahoma, New Mexico and California–an extreme drought. Those people are also having terrible, terrible fires so those cows are already coming to town (being hauled into an auction market) and it’s already having an impact on our packing plants here, because they see the numbers there. They can’t ship as much meat and we are unfortunately going to see that in Western Canada.”

Hay prices are sitting at around $200 a ton for average quality hay. In a typical year, that same hay would be worth $80.

For ranchers like Hall, the supply and demand don’t balance out.

She added the high prices for feed and the shortage of pasture is causing a lot of producers to take a serious look at their operations.

“There will be people out there choosing to sell their cows because there is just not going to be enough good feed around.”

Balog added he is already seeing an impact in the auction industry.

“People are starting to call [us] and all the other auction markets and are starting to say, ‘We need to sell 40, or 60, or all of our cows, because we are not going to buy hay.’ So already the price has come down.”

He said the number of cows coming to market is also impacting the price producers are getting for the cows they can’t afford to feed any longer.

“We’ve seen a 25 cent drop in the slaughter market. We pray that it’s not going to go down anymore, but if too many cows come to town, that price will continue to be real tough.”

Balog worries about the overall inventory of cattle in North America. He said factors like wildfires and droughts have caused a lot of producers to sell more than they would. He also said the hard winter on both sides of the border has cut down on the number of calves that would normally be sold.

Ranchers like the Halls hope their fellow producers can hold on. Hall said it’s important that planning for the next year starts right away.

“Our grass is truly our most important asset and yet at the same time, how do we not overgraze? Because if we overgraze, we reduce the ability for that land to retain water, and retaining water is really our number 1 priority.”

Tools like rotational grazing and utilizing different types of grass has been helping the Halls cope with the conditions this year, but even though they have managed to keep their livestock fed, other factors–like fire in such dry conditions–have them on edge.

READ MORE: Special air quality statement ends for most of the province after days of smoky conditions

“A fire is the worst thing we could have right now, so when you are smoking and driving, make sure you put your butts out. Don’t throw garbage out, because a glass bottle with this sun can be just as dangerous.”

Farmers and ranchers are among the long list of people hoping for rain to ease the dry conditions, but until then, Hall said she and her fellow community members will try to ride out the unknown.

“Mother Nature is always in charge and in this industry–both as a farmer and a rancher–we always have to be ready to be flexible and go to plan B. We can make all the plans we want but then she’ll change things for us.”

With no idea what this winter has in store, some will be looking for a plan C.

Get a roundup of the most important and intriguing stories from GNCA_REGION, delivered to your inbox every weekday.

Get a roundup of the most important and intriguing stories from GNCA_REGION, delivered to your inbox every weekday.