With less than 24 hours until Ontarians head to the polls, Doug Ford is on track to become the next premier of Canada’s most populous province.

The final Ipsos poll of the campaign, conducted between June 3 and 5, points to a three-point Progressive Conservative lead province-wide and a double-digit lead in the 905. That’s majority territory for Ford, who has seemingly emerged unscathed from two days of high-profile family drama centering around a lawsuit launched by his sister-in-law.

“Basically people who don’t like him are the ones that are talking about (the lawsuit), not the people who are going to vote for him,” said Darrell Bricker, CEO of Ipsos Public Affairs.

If an election were held tomorrow (which, in this instance, it will be), the poll revealed that the PCs would pull in 39 per cent of the decided vote (up two points since last week), compared to 36 per cent for Andrea Horwath‘s NDP (also up two points).

“What we’re seeing is that the Tories are opening up a bit of a lead,” Bricker explained.

“What it shows is that the NDP doesn’t really have their votes distributed in a way that wins a lot of seats for them. But the conservative vote is actually distributed quite efficiently … Doug Ford’s winning where he needs to win.”

An unusual, last-ditch strategy from the Liberals — which relied on leader Kathleen Wynne openly admitting they would lose the election but encouraging voters not to hand the PCs or NDP a majority government — has apparently fallen flat. The incumbent party is now polling at 19 per cent support, down three points.

“If (Wynne’s) desire with her strategy was to firm up Liberal support, it seems to have worked in the other direction,” Bricker said.

The PCs have a commanding lead there, with 45 per cent support. The NDP and Liberals are effectively splitting the progressive vote in the 905, holding on to 28 per cent and 23 per cent support, respectively.

The Liberal campaign has completely collapsed in the downtown 416, however, where the party was leading at the end of May but now sits back in third place, down a full 11 points. 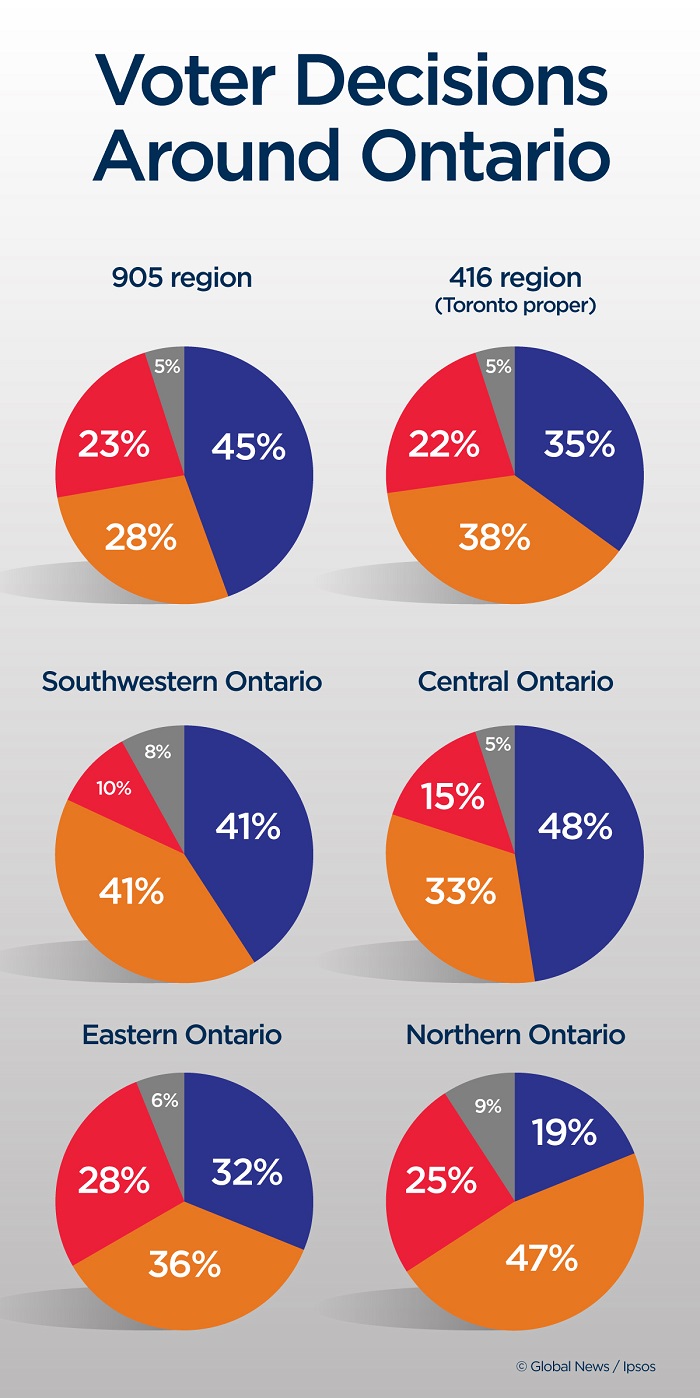 The poll also shows that woman remain very frosty toward the PCs, and still favour the NDP (39 per cent) over Ford’s party (32 per cent) or the Liberals (23 per cent). Ford has failed to make any inroads in that demographic in the final week of the campaign.

READ MORE: How Global News is covering the 2018 Ontario election

In spite of the PC lead in the overall popular vote, Ontarians still think it’s Horwath – not Ford – who would make the best premier.

Four in ten (41 per cent) say Horwath is the leader who would be the best fit for the top job at Queen’s Park, while 34 per cent say it’s Ford. Just 20 per cent say Wynne would continue to be the best premier, while 5 per cent told Ipsos they were unsure. 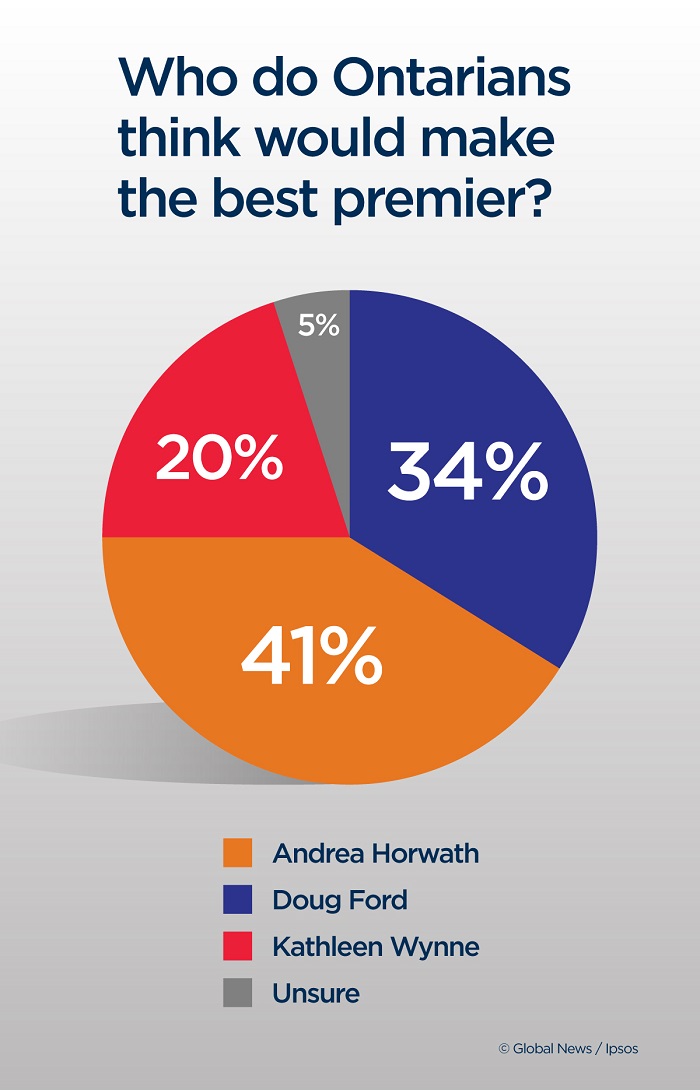 Bricker said that overall voter turnout remains the biggest source of uncertainty at this point when it comes to Thursday’s outcome. Typically, it has hovered around 50 to 60 per cent in past Ontario elections.

“If one party’s voters show up at a historically high level, that could throw out all of the calculations,” he noted.

“So there’s potential for a lot of surprise on election night.”

WATCH BELOW: Who’s leading in the polls ahead of Ontario’s election?

These are some of the findings of an Ipsos poll conducted between June 3 to 5, 2018, on behalf of Global News. For this survey, a sample of 1,501 Ontario eligible voters was interviewed online and by telephone. Weighting was then employed to balance demographics to ensure that the sample’s composition reflects that of the adult population according to Census data and to provide results intended to approximate the sample universe. The precision of Ipsos online polls is measured using a credibility interval. In this case, the poll is accurate to within ±3.1 percentage points, 19 times out of 20, had all eligible Ontario voters been polled.