A Winnipeg wrestling legend has challenged a country music star — not a wrestling match, but a bet involving his hometown Winnipeg Jets.

The challenge? A $10,000 bet based on the outcome of the Winnipeg Jets-Nashville Predators second-round Stanley Cup Playoff series.

And there it is…@IAmJericho challenges @carrieunderwood to wager $10,000 to their respective favourite (favorite) charities in @NHLJets @PredsNHL

“If she’s a proud Nashville Predators fan, half as much as she claims to be, she’ll have no problem doing a friendly wager,” Jericho said.

“If you’re going to be touting the Nashville Predators, you have no idea what you’re getting yourself into. This is Winnipeg. We are Winnipeg.”

Jericho is proposing the wager to be all in the name of charity, with the winnings to go to each celebrity’s charity of choice. 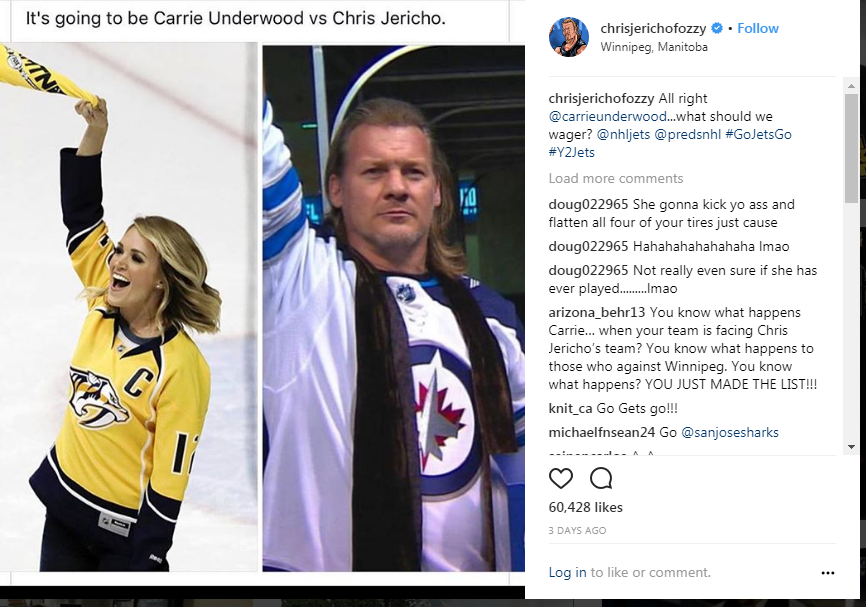 The wrestler said he would donate his winnings to the JDRF in support of Type 1 diabetes.

There has been no response from Underwood as of yet, but Jericho says if she responds and decides to up the stakes, he’s ready.

“I’ll accept any bet that she throws upon me.”

Game 1 of the series goes Friday night in Nashville at 7 p.m. CT.